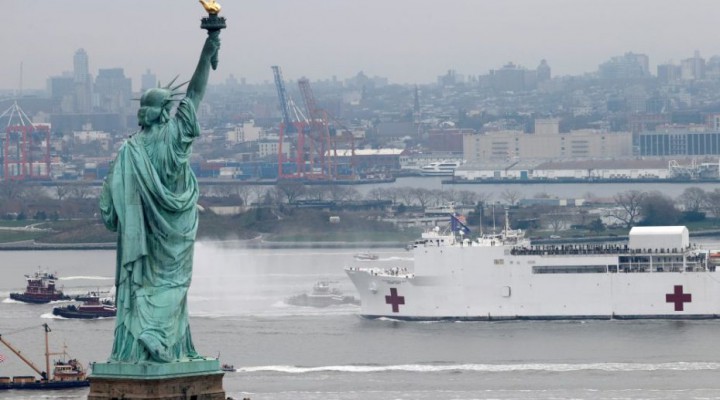 Dozens of U.S. government-chartered flights have begun to airlift vital medical equipment and supplies from China to the U.S. as the latter becomes the world’s biggest case load of infections from the novel coronavirus. There are grim forecasts for the number of deaths in the U.S. as the pandemic is weeks from peaking there.

China is cooperating with the U.S. in organizing the massive medical transfer, naturally of course, given the humanitarian crisis. You would think therefore that a little reciprocation would be in order from Washington. After all, China is one of those foreign countries that the U.S. has imposed sanctions on over alleged human rights violations. Would it not behove the U.S. to show a bit of solidarity and gratitude by dropping its sanctions regime against China?

And not just China. There are are some 30 countries and territories that currently sit on a U.S. sanctions list, mostly due to Washington’s accusations of human rights violations. Some of the targeted nations have been under sanctions for decades, such as Cuba, North Korea and Iran. Others have joined the dubious club more recently, such as Russia, Yemen and Venezuela.

Surely at this unprecedented time of a global pandemic threatening millions of human beings regardless of nationality, it is time to show genuine solidarity and compassion for others. The very idea of imposing sanctions on other countries is not only anachronistic. It is utterly barbaric.

In any case, U.S. sanctions imposed unilaterally without the mandate of the UN Security Council are arguably illegal. Even before the coronavirus outbreak and its accompanying disease, Covid-19, the American deployment of embargoes to disrupt commerce and trade of other countries could be seen as reprehensible. Such measures are rightly judged to be collective punishment of civilians which violates international law and the UN Charter.

But now as countries battle against an existential threat posed by the virus, the existing U.S. sanctions can be seen as an abomination.

Iran is a particularly poignant case. It has one of the highest infection rates in the world with thousands of deaths in a matter of weeks. Yet the Trump administration sees fit to not only maintain harsh sanctions on Tehran, it has actually added three more rounds of sanctions against Iran since the epidemic occurred. The deaths in Iran are being multiplied by American policy.

The Trump administration cynically claims that U.S. sanctions do not impede humanitarian aid to Iran. The claim is beneath contempt. The crippling sanctions imposed by Trump’s “maximum pressure” policy virtually precludes Iran from making international financial transactions, including for medicines. Moreover, the effect of “secondary sanctions” means that many countries are intimidated from doing business with Iran out of fear of U.S. reprisals.

Washington has blood on its hands where any country is finding the fight against Covid-19 in any way more difficult. It already had blood on its hands from its illegal sanctions. But what we have now is the grotesque picture of a ghoulish, sadistic American government shamelessly showing its ugly face at a time of global suffering.

At the G20 summit last week – held by teleconference to avoid spreading coronavirus infection – Russian President Vladimir Putin called on the world to drop sanctions at this critical juncture. He said it was imperative for all nations to have access to medicines and equipment without financial restrictions. “It is a question of whether people live or die,” he added.

In the end, however, the G20 final joint statement omitted any unanimous mention of sanctions. One suspects that the U.S. – the world’s number-one serial abuser of sanctions – pulled strings behind the scenes to pre-empt any move to banish such measures of financial coercion. Not surprisingly, because financial coercion (less politely, “terrorism”) is an instrumental weapon for U.S. foreign policy, as much as its military intimidation of other nations is.

Instead, what came out of the G20 conference was a joint statement of vapid, disingenuous rhetoric.

It opined: “Global action, solidarity and international cooperation are more than ever necessary to address this pandemic. We are confident that, working closely together, we will overcome this. We will protect

Just how does “global solidarity” and “working closer together to protect human life” translate into practical remedial action when Washington continues to wield a veto over some of the poorest and weakest nations gaining life-saving supplies?

If there were any compassion or morality in Washington, it would immediately rescind all its sanctions against other nations in recognition of common humanity. But the hard-heartedness of Washington is unrelenting even at a time of crisis and death. It is based on a self-righteousness that is frightening in the scale of its hubris and hypocrisy.

A certain natural “correction” is due for this endemic criminal mentality of America’s ruling class. And one senses that the correction for its systematic evildoing against fellow human beings is not going to pass lightly.