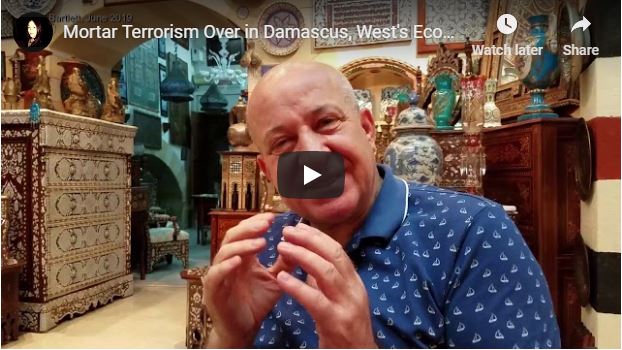 While taking a break from writing yesterday, I wandered the lanes of old Damascus once again and came across a shop & its owner I hadn’t seen since 2014 [ https://www.youtube.com/watch?v=aTK58vuvwLo].

Back then, he spoke with certainty that peace would return to Damascus, ‘sooner or later’.

We chatted over tea. Now that peace has returned–in the sense that Damascus is no longer being pounded by mortars and missiles fired from terrorists then-occupying eastern Ghouta–most people I speak with these days are weighed down by the economy, shattered by years of war on Syria and by the criminal Western sanctions.

He spoke of how there used to be so many tourists in Syria, not so much nowadays…

(That said, a friend here is a tour guide, and his work is picking up, he has more groups coming to tour Syria this year…)

“Every day, even during the war, I stayed open. Never closed the shop.”
Syrian steadfastness.

Beautiful Damascus Streets, Filmed over the Days of Eid