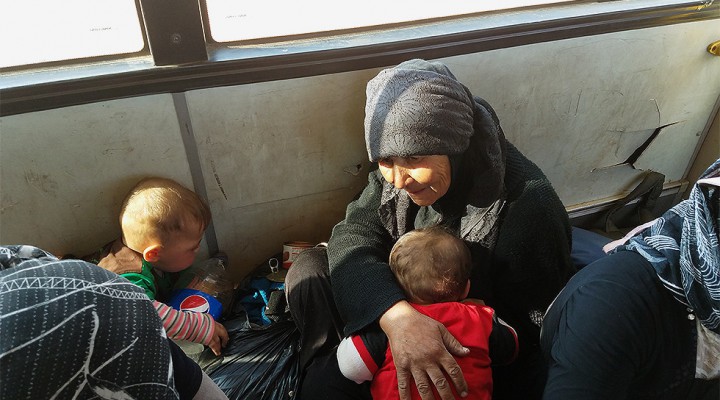 Syria and Russia have been evacuating civilians from yet another region starved by its Western-backed terrorists. But Western corporate media ignore this and instead continue spinning nightmarish war propaganda on Syria.

Predictably, copy-paste Syrian reports emanate from Western governments and corporate media feign concern for civilians in Idlib while negating to mention that the Idlib governorate is an Al-Qaeda hotbed.

Back in Syria again, over the ‘Eid holidays, I spoke with residents about life in Damascus now, and highlighted the peace which exists – having been absent for many years prior when terrorists’ mortars rained down on the city.

But I was also interested in highlighting another issue: the evacuation of southeastern Syria’s Rukban Camp which has been under way for months; civilians have been plucked from starvation and intolerable conditions, and delivered to safety with access to food and medical care.

In February, Russia and Syria set up humanitarian corridors to start evacuating civilians to safe areas where they could receive medical treatment and resettle in their home areas or elsewhere.

In June, 2019, I travelled to a point where I could interview evacuees of the Rukban, the unbearable camp near the US-occupied Al-Tanf base.

United States of hypocrisy occupies & places blame on others

Rukban also lies on the border with Jordan. Over the years, it has become a hell on earth, with residents starving due to a lack of accessible food. In November 2018, there were around 50,000 refugees in the camp.

Most Western reporting on the situation in Rukban has blamed Syria and Russia for the scarcity of food in the camp. Surprisingly, a June 2018 article by US think tank the Century Foundation highlighted US control over the camp and surrounding areas.

“The Tanf–Rukban zone is patrolled by Coalition forces and their chosen Syrian partner, Maghawir al-Thawra… Also present are the remnants of a formerly Pentagon-backed group called the Qaryatein Martyr Battalions and three factions formerly linked to the CIA’s covert war in Syria: the Army of the Eastern Lions, the Martyr Ahmed al-Abdo Forces, and the Shaam Liberation Army.”

The US stymied aid to Rukban, and was then only willing to provide security for aid convoys to a point 10 kilometres (6.2 miles) away from the camp, according to the UN’s own Emergency Relief Coordinator, Mark Lowcock.

So, by US administration logic, convoys should have dropped their Rukban-specific aid in areas controlled by terrorist groups and just hoped for the best.

Even if the US intentions were good, experience has shown that when terrorist groups occupying an area have access to aid, they keep it for themselves, civilians don’t see it unless they pay a high price.

When eastern areas of Aleppo were liberated in December 2016, even Reuters had to report that civilians blamed so-called ‘rebels’ for hoarding food they desperately needed.

When Madaya, heavily propagandized about in early 2016, was restored to safety in 2017, I travelled there and spoke to residents who again solely blamedterrorists for their starvation. Same in eastern Ghouta, where residents spoke of starvation and executions, by terrorists.

Russian Foreign Minister Sergey Lavrov noted that if Americans at al-Tanf could get supplies from Iraq and Jordan, they could have also brought in humanitarian aid for Rukban civilians, were they actually so concerned.

Unsurprisingly, in Syria’s and Russia’s eyes, the US is holding civilians in Rukban hostage. This became more apparent when America refused to shut down the camp, quite clearly preferring to have a raison d’être for continuing their illegal occupation of southeastern Syria.

Even the Middle East director for the UN High Commissioner for Refugees (UNHCR), Amin Awad, said that civilians in Rukban were being held against their will, as “human shields”“deprived of basic services,”according to Sputnik News.

Awad pointed the finger at traders in the camp bearing responsibility for the suffering of civilians in Rukban, but civilians I spoke to also included America in their blame.

Older man from Palmyra, in Rukban four years, spoke of “armed gangs” paid in US dollars being the only ones able to eat properly. © Eva Bartlett

On a stretch of road between the Rukban camp and the Homs refugee centre they were headed to on June 12, I met some of the roughly 900 Syrians evacuated that day on 18 buses. Another convoy of trucks carried their tattered personal belongings.

I approached many with questions about life in the camp, moving from bus to bus to speak with them.

An old woman sitting on the floor of one bus said she’d been in the camp for four years, that everything was expensive and they were hungry all the time. She gave the example of being charged 1,000 Syrian pounds (around US$2) for five potatoes.

Mahmoud Saleh, a young man from Homs governorate, told me he’d fled home five years ago. When I asked who was in control in Rukban, he replied without hesitation: “The Americans.”

An older man from Palmyra, four years in the camp, spoke of “armed gangs,” paid in US dollars, being the only ones able to eat properly.

“The armed gangs were living while the rest of the people were dead. Those who wanted fruit had to pay in US dollars. The armed groups were the only ones who could do so.”

“Medical services! There is no medicine at all.” He pointed to a young woman behind him who he said had lost two babies because she couldn’t get a C-section.

Many others who I spoke to said they had wanted to leave before but believed the fearmongering from terrorists who told them they would be “slaughtered by the regime,” a claim floated in corporate media when Aleppo was being liberated.

The Russian Reconciliation Centre reports that some Rukban residents had to pay as much as US$1000 to “militants controlled by the US side” in order to leave.

As of June 13, Russia’s Ministry of Defence reports that 14,347 people, mostly children and women, have been evacuated from Rukban since February 23.

As evacuations of civilians from Rukban have unfolded, any Western corporate media that bothers to report on them has spun them as ‘forced displacement’ to ‘regime areas’ where civilians will be ‘imprisoned and tortured.’

Yeah, Syria and Russia are simply hell-bent on finding any way to torture Syrian civilians, to the extent that they will waste considerable amounts of money and time to so, or at least, that’s what corporate media would have you believe.

And just as Western corporate media relied on the words of “media activists” and “unnamed sources” in their war propagandaprior to and during the liberation of eastern Aleppo and eastern Ghouta, hostile media are again relying on such sources for reporting on Rukban.

Canada’s Globe and Mail went as far as to cite the utterly non-credible, Qatar-based, Syrian Network for Human Rights in a recent article claiming that thousands of Syrians who have returned home have been arrested.

As journalist Max Blumenthal humorously pointed out in his investigation into this Qatar-influenced body, “citing the Syrian Network for Human Rights as an independent and credible source is the journalistic equivalent of sourcing statistics on head trauma to a research front created by the National Football League, or turning to tobacco industry lobbyists for information on the connection between smoking and lung cancer.”

Contrasting the claims, Syrian authorities have stated that UN representatives have permission to visit the refugee centres. The Russian Reconciliation Centre stated that UN bodies, including the UNHCR, visited the shelters.

Those are some odd statistics given that Western media and politicians would have us believe that the Syrian and Russian governments are terrorizing civilians and gleefully destroying infrastructure in Syria.

0 thoughts on “US exceptionalism: Exploiting certain Syrians, ignoring others”