Beautiful Damascus Streets, Filmed over the Days of Eid 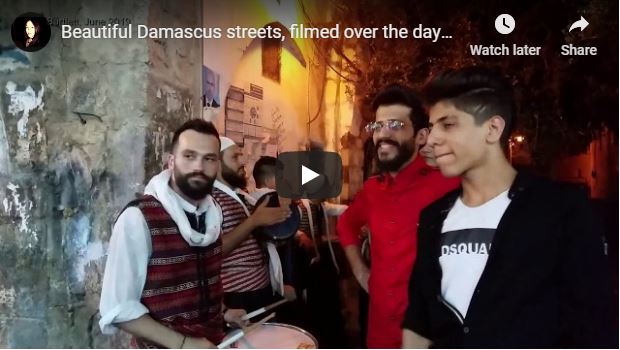 As charming as these scenes are, I’ve had many tell me over the years, including recently, that holidays are tainted with massive sadness for those martyred and maimed by terrorists and in the fight against terrorism and to restore peace to Syria.

I always feel the need to note that these street scenes of tranquility would be impossible without the sacrifices of the Syrian army and allies, and that until the liberation last year of eastern Ghouta, and Yarmouk and surrounding areas, these streets were being constantly targeted by terrorist mortars and missiles, amounting to *at least* 10,000 civilians murdered in Damascus area alone, although I’ve heard higher estimates.

–Terrorists’ Attack on Damascus Restaurant and Homes: “They have no humanity and no respect for children” (July 2016)

–Revisiting Areas Mortared by Terrorists Before Peace Was Restored, Damascus (with Hadi Nasrallah )

–Patriotic Syrian Insisted to Stay in Syria, Despite Terrorists’ Bombings (with Hadi Nasrallah )

Beautiful Damascus streets, filmed over the days of Eid

0 thoughts on “Beautiful Damascus Streets, Filmed over the Days of Eid”