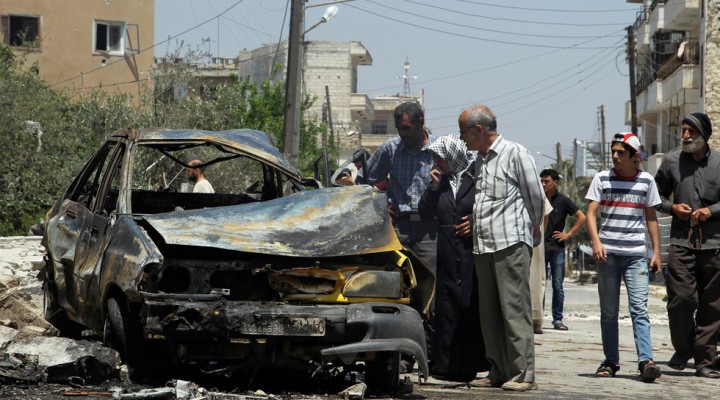 Western media and politicians are crying for Al-Qaeda in Syria again. It doesn’t get much more absurd than this!

After years of brutal occupation by terrorists from various groups and now overwhelmingly Hay’at Tahrir al-Sham (aka Al-Nusra, aka Al-Qaeda in Syria), Idlib governorate will eventually, by political or military means, be liberated. For now, military operations to liberate nearby northern Hama and southern Idlib villages are already under way.

Idlib, occupied by at least 70,000 terrorists, is the last remaining stronghold of Al-Qaeda in Syria – a fact emphasized by the US’ own former special envoy, Brett McGurk, who deemed the northwestern Syrian province the “largest Al-Qaeda safe-haven since 9/11.”

Yet, corporate media continue to deliberately overlook the presence of Al-Qaeda, instead writing of an Idlib that somehow, in the world of the Guardian, for example, is Al-Qaeda-free.

Incredible that terrorists holding much of the north of #Syria hostage have a whole range of western high level officials lobbying for them at all times. Pierce is fed this nonsense about deliberate targeting of civilians & hospitals & she parrots it at the UN like a good girl https://twitter.com/KarenPierceUN/status/1129468792168435712 …

I did not get the assurances I was asking for in the #UNSC today that the deliberate targeting of civilians in Idlib will stop.

We need to know who is responsible for the targeting of hospitals – facilities that every member of the international community has a duty to protect. 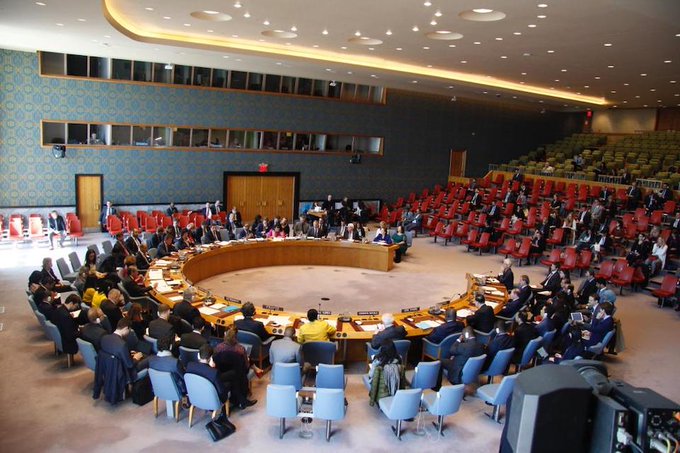 81 people are talking about this

The liberation of Idlib, and also Hama, Latakia and Aleppo countrysides, will mean not only an end to terrorists’ incessant bombing of civilians, but also an end to the savage rule of terrorists – rule which in every prior instance around Syria has meant imprisonment, torture, and public executions of civilians by sword or point-blank assassination, starvation, rape of women, and even organ theft.

Last September, Syria and allies implemented a demilitarized zone and ceasefire around terrorist-occupied areas of Idlib and northern Hama.

Al-Qaeda in Syria unsurprisingly rejected any sort of truce, and continued pounding the civilians of Mhardeh and al-Suqaylabiyah in Hama, and elsewhere within striking range. 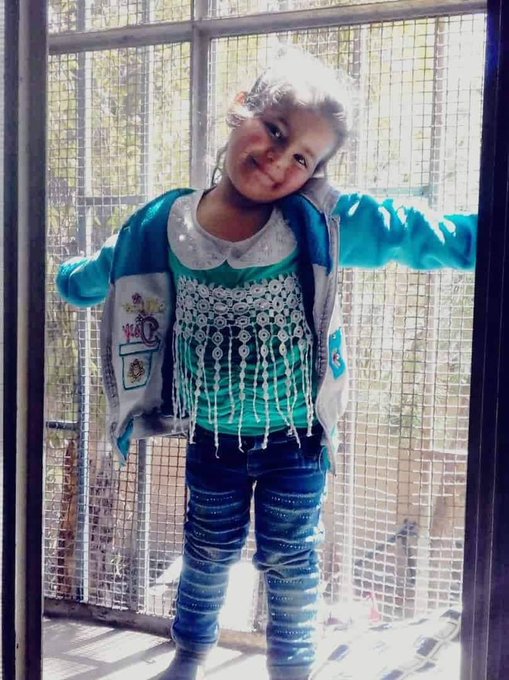 Meet Aleppo princess Gofran Kharme who was martyred yesterday with her mom when “moderate rebels” bombed #Aleppo killing 12 civilians so far! May your soul rest in peace!

And yet, Western leaders and media continue to feign concern for civilians in Idlib, not recognizing that once it and surrounding areas are liberated of terrorists, millions of civilians in Aleppo, Latakia, and Hama will no longer be at risk of being killed or maimed by terrorists.

Last January, I returned to Aleppo to see what had changed since my last visits in years prior. The old city, which has been subject to acts of terrorism including the intentional destruction of numerous historic sites and buildings, was in the painstaking process of being meticulously reconstructed, stone by stone.

And while markets and shops had re-opened and life was thriving in central Aleppo, other parts of Aleppo remain, until now, attacked by Al-Qaeda in the countryside.

In Al-Lairamoun, a western Aleppo industrial area, I visited a factory that was 400 metres from Al-Qaeda snipers, and remains subject to sniping. Aleppo MP Fares Shehabi walked me through the factory, explaining how reopeningliterally in the face of terrorism was their act of defiance. Some of his poignant words include:

“This factory was rubble two years ago. We rehabilitated it. We are doing this as a message of defiance against all who conspired against the people of Aleppo, against the economy of Syria. The enemy was sniping at us, launching mortars, when we were fixing this factory to work again.”

Looking out from a factory in western Aleppo, just 400 metres from al-Qaeda snipers. ©  Eva Bartlett

Already, war propaganda “news” is churning anew, polluting front pages and social media feeds, all over again, without a whiff of originality, much less of credibility.

Even the United Nations is in on the act, not terribly surprisingly since the UN in early 2016 also spouted the Madaya propaganda – while ignoring the brutalsiege, starvation and bombardment of villagers of Kafraya and Foua. Later, the UN inflated numbers of civilians in east Aleppo before that liberation, doubling the actual number. The official UN Twitter feed also endorsed and retweeted Bana Al-Abed when the then 8 year old’s memoirs were published. The child was one of the chief faces of war propaganda in the lead-up to the liberation of Aleppo in late 2016, her account tweeting such things as calling for WW3, as any English-illiterate child might.

A year ago, when eastern Ghouta was being cleared, Al-Nusra, Jaysh al-Islam, and other terrorist organizations that starved and terrorized civilians, the Western and Gulf corporate media were busy citing “media activists” (who frequently are overt in their support of terrorists), and manufacturing unverifiable atrocities to incriminate the Syrian and Russian governments.

Since then, eastern Ghouta towns have returned to normality, with the Syrian government reopening schools formerly closed or used as terrorist headquarters. And with the return of normality there came too the return of media silence, since the war propaganda failed.

Russia and Syria have been warning for months that terrorists in Idlib governorate are prepared to stage yet another fake chemical attack. Russia bases its warnings on intelligence involving Al-Nusra terrorists and the White Helmets.

More recently, journalists of ANNA news filmed another example of a White Helmets headquarters directly next to those of Al-Qaeda terrorists. What was inside and near the White Helmets centre? High quality chemical suits, gas canisters ready to be fitted as missiles fired by Hell Cannons, and a toxic fertilizer. Surely, all just a coincidence.

Meanwhile, the allegations of a chemical attack one year ago in Douma, eastern Ghouta – which many of us independent journalists investigated by actually taking testimonies of civilians and medical staff in Douma – should have been finally laid to rest after the recent leaking of an unpublished OPCW document strongly suggesting that what was sold as a Syrian chemical weapons attack was not. Instead, it was almost definitely a staged provocation. An excerpt notes:

“… observations at the scene of the two locations, together with subsequent analysis, suggest that there is a higher probability that both cylinders were manually placed at those two locations rather than being delivered from aircraft.”

The Working Group on Syria, Propaganda and Media released this leaked document, adding their own observations, including these damning lines:

“… the staging of the Douma incident entailed mass murder of at least 35 civilians… people dressed as White Helmets and endorsed by the leadership of that organization had a key role in this murder… those in OPCW who have suppressed the evidence of staging are, unwittingly or otherwise, colluding with mass murder. ”

And yet, just as corporate media ignored the more-than-one-hour-long panel of incriminating facts and testimonies on the criminal behaviour of the White Helmets in Syria in December 2018 – especially their affiliation with terrorists and their involvement in organ trade – the media are deliberately ignoring this OPCW document, instead parroting the US regime change line and reusing the same old script of a Syrian chemical attack.

Again, with absolutely no evidence of Syria’s alleged chemical guilt, the US isthreatening to bomb Syria anew, as they didalso with zero evidence one year prior.

But this time it’s not just us dang ‘conspiracy theorists’ (that presented a truthful look at events in Syria) who are balking at the obscene omission of reporting on the OPCW lead. Figures such as Roger Waters, Susan Sarandon, and Pamela Anderson are all asking the questions that the war propagandizing media will not on the leaked OPCW report.

When Idlib is finally liberated, I am 100% certain we will hear the same sort of horrific testimonies of life under terrorist rule that we’ve heard in other Syrian liberated areas.

In fact, I already have.

In February, I travelled to Abu al-Duhur to see the humanitarian crossing opened by Russia and Syria to enable safe passage of civilians to government-secured areas. It was closed that day, due to terrorist attacks in the region and close proximity of Al-Qaeda.

In Sinjar, some kilometres on, I was able to interview civilians who’d fled terrorist rule.

“They took my husband, his brothers and nephews. They tortured them almost to death, and until now they still have disabilities in walking and hearing and things like that, it affected their hearing and vision.”

Um Ahmad, from Sinjar, had fled from one area to another, fleeing terrorists, describing them as targeting and stalking civilians. She was eventually able to escape back to now-secure Sinjar along the corridor, although according to her, terrorists did fire on the corridor that day. She didn’t want to give her full name, because she still has siblings, her parents, and two of her sons in terrorist-occupied areas of Idlib.

“My sons are in military service age. The terrorists are at the corridor, and they would beat and imprison them. We used to wait for the corridor to be opened, and every time it opened we couldn’t cross. They used to prevent most of the people from crossing. They are even charging crossing fees, on people, even on infants. People can’t come here because of that.”

I asked her what she thought should be done about Idlib.

“The Syrian Army should not only clean Idlib, they should clean all of Syria. We want the Syrian Army to help us get rid of this terrorism in our country so that people can live as they used to.”

In spite of Western leadership’s whitewashing of this terrorism and waggling of fingers at Syria, Russia and allies actually fighting terrorism, the legality of this fight is not in question. As analyst Sharmine Narwani noted, referring to UN Security Council Resolution 2249 of 2015, “UN member states are called upon to eradicate the safe havens established over Syria/Iraq by ISIL (Islamic State/ISIS), the Al Nusra Front (Syria’s AQ franchise), and ‘all other entities associated with Al Qaeda.’”

That’s precisely what Syria, Russia and allies have been doing, and will continue doing, for the safety of Syrian civilians. It can’t happen soon enough.

0 thoughts on “Liberate Syria’s Idlib, precisely for the civilians that America fakes concern over”