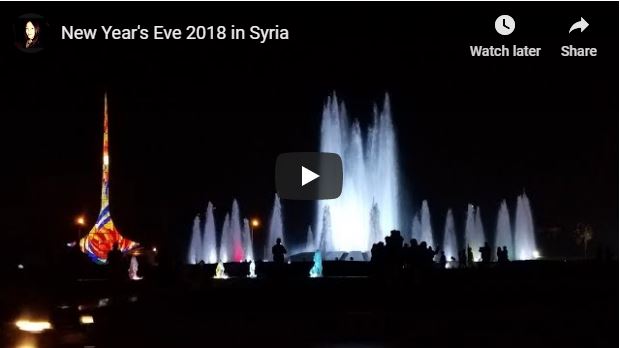 Throughout the evening, I walked around Damascus neighbourhoods,  watching Syrians celebrate and talking with people, some of which I  caught on camera.

This is a compilation of scenes from New Year’s Eve in Syria, where the  pulse of life was stronger than I’ve ever seen over the years.

May 2019 bring full peace back to this beautiful country and its  wonderful people.

Some clips from al-Qassaa, Damascus, and Dweila, just before New Year’s Eve. Notice at the end, the photos of martyrs who died defending Syria. The martyrs are always present, around Syria. May their souls rest in peace and their loved ones be consoled by their heroism.

Reflecting on the terrorism Syrians faced for years, until the liberation of eastern Ghouta earlier this year, and how that liberation enabled Syrians to walk freely and celebrate without fear of being killed or maimed by terrorists’ mortars. As I noted on Twitter, in Dec 2015 I was in Syria. Syrians braved the streets in spite of risk terrorist mortars killing them. According to Dr Zaher Hajo, head of forensics, as of early 2018, terrorists had already killed over 10,000 civilians in Damascus alone (later # higher).