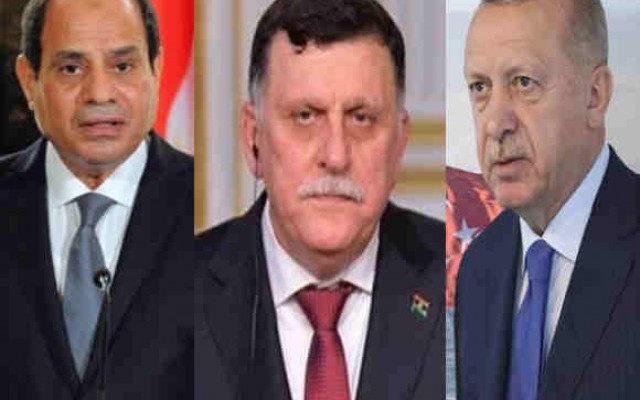 Suddenly, with a military showdown looming on all fronts in Libya, the sound of beating war-drums was halted and replaced by paeans of peace. Both sides in the conflict announced a comprehensive cease-fire and began talking about power-sharing, fresh elections and designating the city of Sirte – birthplace, what irony, of the late Col. Muammar al-Qadhafi’ – as headquarters of an interim administration and a new national capital.

The cessation of hostilities was declared simultaneously by Fayez al-Sarraj, head of the Government of National Accord (GNA) in the west of the country, and Ageela Saleh, speaker of the Tobruk parliament in the east. Their separate statements included many positive points. But they also contained a number of divergences and omissions on key issues such as disarmament, the timing of elections, the management and sharing of oil revenues, and the departure of foreign troops.

All manner of devils may lie in these details. This needs to be pointed out, at the risk of spoiling the climate of optimism that is currently prevailing (as happened after the signing of previous agreements that failed to bring peace).

News reports differ about what brought about this apparent major breakthrough

that raises the prospect of renewed political talks leading to general elections that bring to power a recognised government to reunite and administer the country and revive the Libyan state.

Some give the credit to the US and its ambassador Richard Norland who travelled to Cairo, Tripoli and Ankara and met with both Sarraj and Saleh. Others point to the mediation of German Foreign Minister Haiko Maas, who visited Tripoli on Monday while the Turkish and Qatari defence ministers were there and then flew to Abu Dhabi where he warned against an impending military showdown between the rival sides.

A third explanation credits the frightening and uncontrolled spread of coronavirus in all parts of Libya with persuading the warring parties to set aside their arms and focus on trying to contain, if not control, the pandemic.

Whatever the case, the agreement was welcomed by all the relevant international and regional players, from Egypt to Turkey and Algeria and including the United Nations, Gulf Cooperation Council and Arab League. But if the accord is to be implemented on the ground, key differences between the two sides will need to be resolved. These can be read between the lines of their respective statements, and include:

(1) Saleh’s statement spoke of turning Sirte into a demilitarized city and headquarters of a new presidential council, but did not mention demilitarizing the nearby strategic airbase at Jufra as stipulated by the GNA and its supporters. The latter also do not want to surrender the status of Tripoli, which they control, as national capital, at least for the time being.

(2) The timing of elections. Sarraj wants presidential and parliamentary polls to be held next March, but Saleh’s statement spoke of the formation of an interim three-member presidential council — representing the three regions of Tripolitania, Cyrenaica and Fezzan – to serve for an 18-24 month period to be followed by elections.

(3) The management and sharing of oil revenues and control or protection of the country’s oil production facilities and export terminals. The two sides did agree to deposit oil revenues at the Libyan Foreign Bank rather than the GNA-controlled Central Bank, and for these funds to be frozen until an inclusive government is formed. But it remains unclear whether the Libyan National Oil Company (NOC) will regain control of the facilities. Most are held by the forces of Gen. Khalifa Haftar and the dispute over their withdrawal remains unresolved.

(4) Where does Haftar himself stand? The commander of the self-styled Libyan National Army (LNA) has not made his position known, and has so far refrained from either supporting or opposing the agreement. It is not clear whether or not Saleh speaks for him or is acting with his authorization.

(5) The role of external actors. Who will supervise the elections if they are held? Will the parties concerned comply with the decision to withdraw all mercenary forces from the country, and how? Will the Wagner Group mercenaries aiding Haftar return to Russia? Will the 17,000 ‘jihadis’ the Turks brought in from Syria be repatriated to Turkey or to Idlib? And what about the thousands of Sudanese Janjaweed fighters and Chadian troops?

A positive climate has undoubtedly been generated by the accord and the broad international and regional welcome it received. But much work and time is needed to bring a host divergent positions closer together. All the warring parties in Libya and the factions aligned to them appear to have reached a point of exhaustion, making them reluctant to enter into a hugely costly military confrontation of unpredictable outcome. This could be advantageous in turning this move into a success on the ground. Initially, it could serve as the basis of rapprochement between the various sides, as appears to be happening between the GNA and Egypt.

The Libyan people have paid heavily and suffered severely over the past decade of conflict. They deserve to live in a peaceful and united country that uses its ample resources to provide them with basic services and meet their needs. The agreement will only succeed if the warring Libyans factions can put the people’s interests first, instead of fighting over money and influence and falling into the clutches of external players whose only aim is to grab their country’s oil and gas wealth.

0 thoughts on “Breakthrough in Libya?”