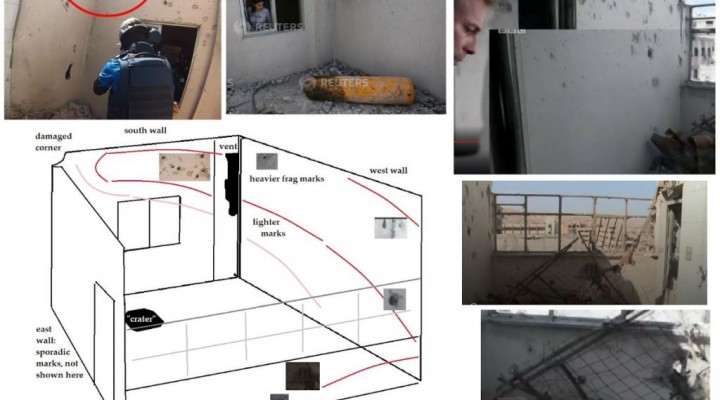 The Douma alleged “chemical weapon” furore has thrown the Syria narrative managers in Western corporate media into disarray. Their default defence mechanism has been to circle their wagons around the Syria “WMD” propaganda which has been instrumental in vilifying the Syrian government and allies.

Professor Piers Robinson, convenor of the outstanding Working Group on Syria, Propaganda and Media has produced a Twitter thread outlining the primary arguments that expose the OPCW as a corrupt instrument of US allied hegemony.

1: Despite nearly two years of attempts to smear, bully and misdirect by @bellingcat, @eliothiggins, @brian_whit and others we are now much closer to knowing the truth of what happened in Douma.

2: To date there remains no adequate explanation as to how the cylinder a location 4 managed to alter trajectory and land on the bed. @bellingcat’s recent attempted rebuttal ignores this entirely whilst suppressed OPCW documents confirm the trajectory is implausible

3: Both the original interim report, now leaked, and the suppressed engineering report by Henderson confirm his trajectory is impossible.

4: Regarding the cylinder at location 2, both Bellingcat and the final OPCW report ignore the obvious evidence that a mortar shell caused the damage including blast fragmentation patterns and twisted metal bars.

5: The suppressed engineering report makes clear this evidence indicates an explosive mortar shell hit the building, not a gas cylinder.

6: Interestingly early images of the cylinder at location 2 show it being manipulated (rotated through 180 degrees) by a White Helmet at the scene:

7: It appears the cylinder is being rotated to line up a dent with the metal bar and tip the cylinder so that its nozzle is pointing into the hole: this looks like a clear attempt to manipulate the crime scene in order to fit the narrative.

8: Higgins attempted to obscure this damning evidence by deleting the tweet:

#Douma #DoumaMassacre #DoumaProvocation
The tweet deleted by Eliot Higgins proves some serious manipulation of the chlorine cylinder. Probably this is the reason why he deleted it. Compare the deleted version to the later White Helmet version. pic.twitter.com/4JcyzIlFtm

9: The assessments of how these civilians came to die remains equally damning for the official narrative. As the original leaked interim report and even the final report states, these victims appear to have dropped dead on the spot:

11: Bellingcat have recently attempted to challenge the opinion of 4 toxicology experts by exploiting poorly worded minutes from the meeting.

12: However, the original interim report makes clear that the observed scenario is not consistent with chlorine poisoning whilst the final report obfuscates this fact and does not refute the opinion of the toxicologists originally consulted:

13: In short, the toxicology and ballistics evidence clearly point toward Douma being stage event involving murder of civilians.

How the OPCW’s investigation of the Douma incident was nobbled.

14: There are now over 24 eminent voices calling for transparency including the OPCW’s first Director General Jose Bustani, scholars including Chomsky and Richard Falk and other brave whistleblowers including Katharine Gun.

15: Mainstream journalists including @ClarkeMicah @SMaurizi and Robert Fisk have all published the serious concerns raised by the OPCW whistleblowers:

16: And yet dishonest commentators continue to smear and harass the whistleblowers whilst OPCW staff are intimidated. Indeed, one senior OPCW official has stated in writing:

17: It is time now for the OPCW to come clean, to stop intimidating its staff, and allow an external investigation of its activities link in all the suspects. It is time for the truth to be told. Continuing to cover up this war crime will, ultimately, lead to prosecutions.

#WikiLeaks OPCW experts are workers doing a very difficult job, they deserve not to be placed in danger of harm from western sponsored militants & to be protected their own bosses. @PiersRobinson1 pic.twitter.com/WIcDQzKcxM

I think it's possible Bellingcat were talking to manipulators of cylinders in real time, all of Eliot's partners ( Forensic Architecture & NYT) were okay with yellow tanks being moved. @PiersRobinson1 pic.twitter.com/F0LZYLJnv2