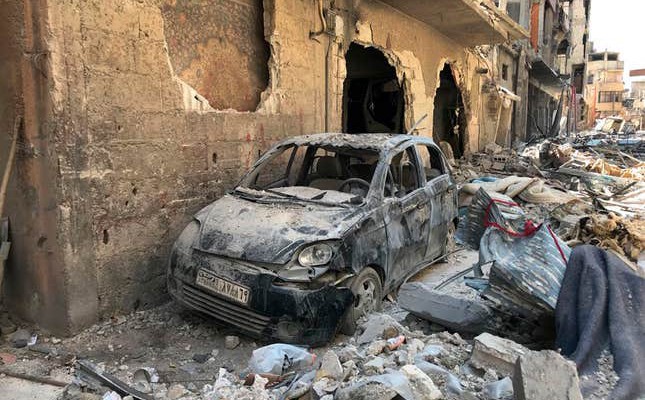 Robert Fisk- The Organisation for the Prohibition of Chemical Weapons has an important role to play in ensuring people know the truth. Nothing should get in the way of that

In the very early spring of this year, I gave a lecture to European military personnel interested in the Middle East. It was scarcely a year since Bashar al-Assad’s alleged use of chlorine gas against the civilian inhabitants of the Damascus suburb of Douma on 7 April 2018, in which 43 people were said to have been killed.

Few present had much doubt that the Organisation for the Prohibition of Chemical Weapons (OPCW), which represents 193 member states around the world, would soon confirm in a final report that Assad was guilty of a war crime which had been condemned by Donald Trump, Emmanuel Macron and Theresa May.

But at the end of my talk, a young Nato officer who specialises in chemical weapons – he was not British – sought me out for a private conversation. “The OPCW are not going to admit all they know,” he said. “They’ve already censored their own documents.”

I could not extract any more from him. He smiled and walked away, leaving me to guess what he was talking about. If Nato had doubts about the OPCW, this was a very serious matter.

When it published its final report in March this year, the OPCW said that testimony, environmental and biomedical samples and toxicological and ballistic analyses provided “reasonable grounds” that “the use of a toxic chemical had taken place” in Douma which contained “reactive chlorine”.

Related: Theresa May on Douma chemical weapon attack – ‘Such an atrocity… is a stain on our humanity’
The US, Britain and France, which launched missile attacks on Syrian military sites in retaliation for Douma – before any investigation had taken place – thought themselves justified. The OPCW’s report was splashed across headlines around the world – to the indignation of Russia, Assad’s principal military ally, which denied the validity of the publication.
Then, in mid-May 2019, came news of a confidential report by OPCW South African ballistics inspector Ian Henderson – a document which the organisation excluded from its final report – which took issue with the organisation’s conclusions. Canisters supposedly containing chlorine gas may not have been dropped by Syrian helicopters, it suggested, and could have been placed at the site of the attack by unknown hands.

Peter Hitchens of the Mail on Sunday reported in detail on the Henderson document. No other mainstream media followed up this story. The BBC, for example, had reported in full on the OPCW’s final report on the use of chlorine gas, but never mentioned the subsequent Henderson story.

And here I might myself have abandoned the trail had I not received a call on my Beirut phone shortly after the Henderson paper, from the Nato officer who had tipped me off about the OPCW’s apparent censorship of its own documents. “I wasn’t talking about the Henderson report,” he said abruptly. And immediately terminated our conversation. But now I understand what he must have been talking about.

For in the past few weeks, there has emerged deeply disturbing new evidence that the OPCW went far further than merely excluding one dissenting voice from its conclusions on the 2018 Douma attack.

The most recent information – published on WikiLeaks, in a report from Hitchens again and from Jonathan Steele, a former senior foreign correspondent for The Guardian – suggests that the OPCW suppressed or failed to publish, or simply preferred to ignore, the conclusions of up to 20 other members of its staff who became so upset at what they regarded as the misleading conclusions of the final report that they officially sought to have it changed in order to represent the truth. (The OPCW has said in a number of statements that it stands by its final report.)

At first, senior OPCW officials contented themselves by merely acknowledging the Henderson report’s existence a few days after it appeared without making any comment on its contents. When the far more damaging later reports emerged in early November, Fernando Arias, the OPCW’s director general, said that it was in “the nature of any thorough enquiry for individuals in a team to express subjective views. While some of the views continue to circulate in some public discussion forums, I would like to reiterate that I stand by the independent, professional conclusion [of the investigation].” The OPCW declined to respond to questions from Hitchens or Steele.

But the new details suggest that other evidence could have been left unpublished by the OPCW. These were not just from leaked emails, but given by an OPCW inspector – a colleague of Henderson – who was one of a team of eight to visit Douma and who appeared at a briefing in Brussels last month to explain his original findings to a group of disarmament, legal, medical and intelligence personnel.

As Steele reported afterwards, in a piece published by Counterpunch in mid-November 2019, the inspector – who gave his name to his audience, but asked to be called “Alex” – said he did not want to undermine the OPCW but stated that “most of the Douma team” felt the two reports on the incident (the OPCW had also published an interim report in 2018) were “scientifically impoverished, procedurally irregular and possibly fraudulent”. Alex said he sought, in vain, to have a subsequent OPCW conference to address these concerns and “demonstrate transparency, impartiality and independence”.

For example, Alex cited the OPCW report’s claim that “various chlorinated organic chemicals (COCs) were found” in Douma, but said that there were “huge internal arguments” in the OPCW even before its 2018 interim report was published. Findings comparing chlorine gas normally present in the atmosphere with evidence from the Douma site were, according to Alex, kept by the head of the Douma mission and not passed to the inspector who was drafting the interim report. Alex said that he subsequently discovered that the COCs in Douma were “no higher than you would expect in any household environment”, a point which he says was omitted from both OPCW reports. Alex told his Brussels audience that these omissions were “deliberate and irregular”.

Alex also said that a British diplomat who was OPCW’s chef de cabinet invited several members of the drafting team to his office, where they found three US officials who told them that the Syrian regime had conducted a gas attack and that two cylinders found in one building contained 170 kilograms of chlorine. The inspectors, Alex remarked, regarded this as unacceptable pressure and a violation of the OPCW’s principles of “independence and impartiality”.

Regarding the comments from Alex, the OPCW has pointed to the statement by Arias that the organisation stands by its final report.

Further emails continue to emerge from these discussions. This weekend, for example, WikiLeaks sent to The Independent an apparent account of a meeting held by OPCW toxicologists and pharmacists “all specialists in CW (Chemical Warfare)”, according to the document. The meeting is dated 6 June 2018 and says that “the experts were conclusive in their statements that there is no correlation between symptoms [of the victims] and chlorine exposure.”

In particular, they stated that “the onset of excessive frothing, as a result of pulmonary edema observed in photos and reported by witnesses would not occur in the short time period between the reported occurrence of the alleged incident and the time the videos were recorded”. When I asked for a response to this document, a spokesman for the OPCW headquarters in Holland said that my request would be “considered”. That was on Monday 23 December.

Any international organisation, of course, has a right to select the most quotable parts of its documentation on any investigation, or to set aside an individual’s dissenting report – although, in ordinary legal enquiries, dissenting voices are quite often acknowledged. Chemical warfare is not an exact science – chlorine gas does not carry a maker’s name or computer number in the same way that fragments of tank shells or bombs often do.

But the degree of unease within the OPCW’s staff surely cannot be concealed much longer. To the delight of the Russians and the despair of its supporters, an organisation whose prestige alone should frighten any potential war criminals is scarcely bothering to confront its own detractors. Military commanders may conceal their tactics from an enemy in time of war, but this provides no excuse for an important international organisation dedicated to the prohibition of chemical weapons to allow its antagonists to claim that it has “cooked the books” by permitting political pressure to take precedence over the facts. And that is what is happening today.

The deep concerns among some of the OPCW staff and the deletion of their evidence does not mean that gas has not been used in Syria by the government or even by the Russians or by Isis and its fellow Islamists. All stand guilty of war crimes in the Syrian conflict. The OPCW’s response to the evidence should not let war criminals off the hook. But it certainly helps them.

And what could be portrayed as acts of deceit by a supposedly authoritative body of international scientists can lead some to only one conclusion: that they must resort to those whom the west regards as “traitors” to security – WikiLeaks and others – if they wish to find out the story behind official reports. So far, the Russians and the Syrian regime have been the winners in the propaganda war. Such organisations as the OPCE need to work to make sure the truth can be revealed to everyone.