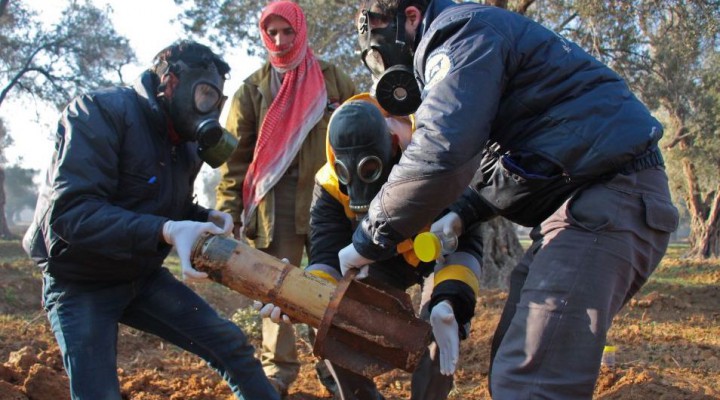 Is the media suppressing evidence that the 2018 chemical ‘attack’ in Syria didn’t happen the way officials said it did?

At issue was what he said regarding the magazine’s refusal to cover the scandal unfolding within the Organization for the Prohibition of Chemical Weapons (OPCW). Evidence has been building for some time that the OPCW cooked the books in its investigation of alleged chemical weapons use in the Syrian town of Douma on April 7, 2018. These allegations served as the justification for a subsequent joint U.S.-U.K.-France attack against suspected chemical weapons targets inside Syria, despite the fact that the OPCW had yet to inspect the Douma location, let alone issue a report on its findings.

In an announcement on Twitter, Haddad declared, “I resigned from Newsweek after my attempts to publish newsworthy revelations about the leaked OPCW letterwere refused for no valid reason,” adding, “I have collected evidence of how they [the OPCW] suppressed the story in addition to evidence from another case where info inconvenient to US govt was removed, though it was factually correct.” Haddad further noted that he had been threatened by Newsweek with legal action if he sought to publish his findings elsewhere.

The OPCW’s Douma investigation has been under a cloud of controversy since shortly after its interim report was released to the public in early March 2019. The document was prepared by Ian Henderson, an engineer working for the OPCW. It challenged the conclusions of the inspection team regarding the provenance of two chlorine canisters located at the incident scene, and was leaked to the press.

The document, which the OPCW subsequently declared to be genuine, raised the probability that the canisters had been manually placed at the scene, as opposed to having been dropped by the Syrian Air Force, raising the question as to whether the entire Douma incident had been staged.

Haddad’s story, however, was not about Ian Henderson’s report, but rather a series of new documents, backed up by an inspector-turned-whistleblower known only as “Alex,” that accused the OPCW leadership of ignoring the findings of its own inspectors in favor of a revisionist report prepared by another team of inspectors based out of Turkey. This second group allegedly relied heavily on data and witnesses provided by the Syrian Civil Defense (the “White Helmets”) and the Syrian American Medical Society (SAMS), two ostensibly humanitarian organizations opposed to the regime of Syrian President Bashar al-Assad.

Haddad’s new sources emerged after the publication of the OPCW’s final report on the Douma incident in July 2019. That document concluded that chlorine had been used as a weapon at Douma, likely via chlorine canisters dropped from aircraft—making the Syrian government solely responsible and legitimizing the U.S.-led aerial attacks.

The leaked material was verified by interviews to select reporters (possibly including Haddad, who is seeking whistleblower-like protection from Newsweek) by “Alex,” who claims to have been part of the Douma investigation. The narrative that emerges from a cursory examination of this new data is damning—the OPCW suppressed the findings of the investigation team, which concluded that chlorine had not been used as a weapon at Douma. The OPCW management then conspired with the U.S. government to manufacture another report, based on an alternate set of facts, which sustained the notion that the Syrian government had, in fact, used chlorine as a weapon.

The OPCW management has largely ignored the leaks. The current director general, Fernando Arias, defended the work of his organization, declaring, “While some of these diverse views continue to circulate in some public discussion forums, I would like to reiterate that I stand by the independent, professional conclusion [of the investigation].” For its part, Newsweek, through a spokesperson, told a reporter, “The writer [Haddad] pitched a conspiracy theory rather than an idea for objective reporting. Newsweek editors rejected the pitch.”

Under normal circumstances, the leaked documents and first-hand testimony of a whistleblower like “Alex” would have garnered the attention of the mainstream media, especially given their link to the Trump administration. There was a time when the media wasn’t afraid to take a controversial story and run with it, even one that involved multilateral arms control. In August 1998, I resigned from my position as a chief weapons inspector with the United Nations Special Commission (UNSCOM), which had been charged with the removal, destruction, or dismantling of Iraqi weapons of mass destruction (WMD) in accordance with relevant UN Security Council resolutions. My resignation was front-page news at both The New York Times and The Washington Post (among others), and I was called to testify before the both the Senate and the House about my allegations, which centered on American interference with the work of UNSCOM.

In retrospect, I’d be delusional to believe that the sole reason the media had taken an interest in my story was that they found the intricacies of disarming Iraq fascinating. The reality was that, at least from the perspective of the mass media, my resignation had served as a means to play the story off against competing domestic political power bases, which in my case consisted of an incumbent Democratic president, Bill Clinton, and a Congress where both houses were controlled by Republicans.

My story had relevance not because I was empowered with fact-based truth (I was), but because my cause was taken up by one side (congressional Republicans) and used as a political cudgel against the other (President Clinton). The moment both the president and Congress came together of one mind, choosing military-backed regime change over legitimate disarmament, my utility was eliminated, and the media dropped me like a bad habit. The demonization of Saddam Hussein’s Iraq precluded any meaningful discussion of issues of disarmament, with the end result the unquestioning embrace of the notion that Iraq had retained WMD, despite there being no evidence to sustain this, and an acceptance of war as the only viable solution, despite the fact that weapons inspections had proven they could be useful.

While conventional wisdom eventually evolved to accept the fact that the UN disarmament process had worked, and that I was correct when I’d reported that Iraq had been qualitatively disarmed and no longer posed a threat worthy of war, the fact remains that the issue of Iraqi WMD was always secondary to the issue of Saddam Hussein. Even once there was agreement that the WMD had been nonexistent, there was never any rethinking of how we had collectively pigeonholed Saddam into the “evil dictator” category, with the merits of his removal rarely questioned.

There are many similarities between my case and that of the OPCW inspectors, especially when it comes to their defending the integrity of the institution they represent and resisting the corruption of outside influences. The OPCW matter, however, remains a matter of internal dispute, denied the grand stage of American politics and the media attention that would garner.

There are several reasons for this. First, it is hard to rally people around a case where the central debate is over the relevance of particles per billion, or engineering equations concerning the tensile strength of concrete and steel. While the underlying science and math appears to be on the side of Ian Henderson and “Alex,” the refusal of the OPCW to engage in any substantive discussion means that what passes for a “debate” has been hijacked by social media personalities. They’re led by Eliot Higgins and his cohort of Bellingcat “specialists” who back up their questionable science with well-worn tropes designating all who oppose them as “pro-Assad” conspiracy theorists and/or Russian-controlled trolls who are simply regurgitating “Kremlin talking points.”

Newsweek’s suppression of the reporting of Tareq Haddad is disturbing; the failure of the mainstream media to pick up the metaphorical ball and run with it is a damning indictment of the current state of journalism today. There was a time when an intrepid investigative reporter like Seymour Hersh would have sunk his teeth into a story such as this. But Hersh’s one-time outlet of choice—the New Yorker—and its editor, David Remnick, have foregone the pursuit of truth in favor of publishing stories that demonize Assad and Putin. The same can be said of The New York Times, The Washington Post, and other major media outlets.

The OPCW whistleblower scandal has all the elements of a blockbuster—heroes, villains, scandal, lies, and cover-up. But fact-based truth is no longer the fuel of the media business that modern journalism is supposed to sustain, especially when the truth can so easily be fobbed off as “pro-Assad” or “pro-Russia.” As long as this model remains in place, and the work of genuine journalists such as Tareq Haddad is suppressed by editors, the American people will remain prisoners of their own ignorance.

0 thoughts on “A Newsweek Reporter Resigns, A Counter-Narrative Won’t Die”