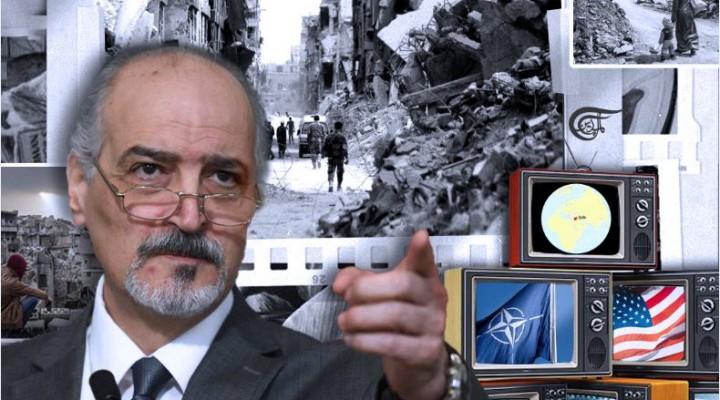 Syria’s centuries-old refusal to take orders from foreign powers and its resistance to repeated foreign interventions has led to its ‘punishment’ by frustrated imperial forces, says Syria’s Vice Foreign Minister Dr. Bashar Al-Jaafari. “We are like Cuba; or perhaps Cuba is like us”, said the veteran diplomat.

That independent history can be traced back to ancient times, when Queen Zenobia broke away from Roman rule. It was inflamed a century ago when Sultan Pasha Al-Atrash led the Great Arab Revolt of the 1920s against the French colonial power. And it rose again with Syria’s defeat of a massive, decade-long proxy war, driven by Washington and other NATO states, “Israel” and some of the Gulf monarchies.

But while Syria, at great cost, has defeated mass terrorism, according to Dr. Al-Jaafari, the “unprecedented” military interventions, occupations and economic war remain. The USA and Turkey, two NATO states, occupy huge swathes of Syrian land in the north and east and the Israeli occupation remains in the south. Each provides safe haven for terrorist groups.

These days Washington does not even bother to deny that it is stealing Syrian oil and wheat. It even signs UN declarations supporting the “sovereignty and territorial integrity” of Syria, while occupying Syrian land out of spite, to punish and divide the peoples of the region, for the benefit of Israeli and US hegemony.

Syria as an Arab nation once included current-day Iskenderun, Lebanon, Palestine and Jordan. Colonists tried to crush its Pan-Arab ideology, which rose against the French and the British, leading to the hard-fought renewal of independence in 1947. Dr. Al-Jaafari says Pan-Arabism, which forms the basis of the Syrian Arab Baath Party and other groups (like Nasserites and the SSNP), is a reflection of the region’s Arab-speaking peoples, with a shared history, aspiration and culture.

Further, Syria, almost uniquely in the region, has led the process of separating religion from politics which, in turn, supports its broader, inclusive Arab traditions and historic defense of multiple and rich social communities. Syria’s famous pluralism was attacked by the NATO-sponsored terrorist groups, mainly Jabhat al Nusra and ISIS/DAESH, who abused minority communities while slaughtering anyone who backed the Damascus government.

The country remains under a severe US economic blockade, backed by the European Union, and subject to multiple foreign occupations. Repeated ‘chemical weapons of mass destruction’ scams, false flag massacres, fake claims of ‘freedom and democracy’, ‘moderate armed opposition’ slogans and the demonizing of President Assad were all part of a war to destroy, not just the Syrian government, but the Syrian state.

Dr. Al-Jaafari says that “from day one the Western strategy was based on making Syria a failed state”. That meant undermining Syria’s means of subsistence and strength – wheat, water, oil, the Tabqa dam, irrigation for agriculture, health systems and energy sources. “When you are a failed state, you lose your sovereignty; once you lose your sovereignty they can do to you whatever they want, because there is no state.”

“Our strength,” he says, “was to counter this strategy; and that is why they are extremely upset. We resisted their strategy and they failed It cost them trillions of dollars, eleven years of depriving the Syrian people of their basic needs. But they failed … We won the war, diplomatically speaking … militarily speaking, not yet”.

“The game is over … I think we preserved what is essential, we preserved the state, the country, the dignity, the independence and the political independence. It is costly yes, it has been so costly. But nowadays nobody says that we are wrong.”

Yet they do try to falsify history. If we look at the distorted ‘open source’ site Wikipedia we will see that ‘The Dirty War on Syria’ is listed as the ‘Syrian Civil War’. It is nothing of the sort. It is one of more than 20 proxy wars Washington has driven in the first two decades of this century. Dr. Al-Jaafari points out that a UN sub-committee on Afghanistan’s Taliban in 2017 listed 101 countries as having exported terrorists to Syria. A number, like Indonesia, had governments friendly to Syria. On top of this, Israelis and the two largest NATO armies still occupy Syria. This is hardly a ‘civil war’.

Even though the Astana process (involving Russia, Iran and Turkey) has made some progress, by helping create ‘de-escalation zones’, Turkey under Erdogan has done tremendous damage to Syria. Dr Bashar says: “the Turkish policy has caused Syria and the Syrian people great damage, great damage.” On top of its support for the terrorist groups, the Turkish government has attacked critical civilian infrastructure.

Syria had an agreement with Turkey on sharing water which committed to passing 500 cubic meters per second, down the Euphrates. Yet for the last 10 years, “they have allowed less than half of this”, causing great damage to the electricity-generating Tabqa dam: “They did the same to a station in Al-Hasakah governate.”

So there have been chronic shortages of water for agriculture, as well as the theft of oil and wheat by the Americans. In Iraq, the situation is even worse. “Now the Iraqis walk in the [bed of the Tigris] river”.

Turkey is part of NATO and “is benefiting greatly from the American wrongdoings in the region… sharing benefits from the chaos that they themselves created.”

The Vice Minister made two points about aid and the refugees. He tells countries saying they want to provide ‘aid’: “We don’t need” your aid. He says Syria needs to rebuild its own capacities, reopening factories and creating employment.

These foreign states use correct words about refugees having “dignified and safe” lives. But their programs serve to keep them forever in the camps. “They will not come back because they don’t have jobs and homes.”

Instead of spending billions of dollars on the refugees, Dr. Al-Jaafari aks, “why not give them all $10,000 each, enough to restart their lives back home? Why not pay them $10,000 once, instead of the same amount every year?”

What the enemies of Syria did to Syria “has gone beyond the threshold”, he says. “In my opinion, they did it … because we did not punish them for what they did in Iraq … that was the biggest mistake ever.”

Yet there have been great geopolitical changes in recent years. “The whole world is shifting”, he says, with the rise of BRICS, the Shanghai Cooperation Organization (SCO), and other blocs. “The whole Asian part of the world” has given up on Western-dominated organizations like the WTO, the IMF and the World Bank.

“They don’t believe in that anymore and they want to create alternatives … let me say eastern alternatives, and this is very important.” The geopolitical center is shifting because the west has committed so many errors. This “might be a positive development, it might be a prelude to further confrontation, or it might be both.” In any case, he says, it is a sign that “enough is enough”.

Asked if Syria has applied to join the SCO, Dr. Al-Jaafari replies “of course, we submitted our request … recently.”

Syria and its Arab foes

0 thoughts on “Dr. Bashar Al-Jaafari: Why they ‘punish’ Syria”