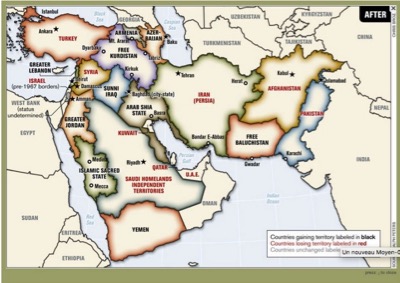 For two decades, the Pentagon has been applying the “Rumsfeld/Cebrowski doctrine” to the “wider Middle East”. Several times, it thought of extending it to the “Caribbean Basin”, but refrained from doing so, concentrating its power on its first target. The Pentagon acts as an autonomous decision-making center that is effectively outside the power of the president. It is a civil-military administration that imposes its objectives on the rest of the military.

In my book L’Effroyable imposture [1] [2], I wrote, in March, 2002, that the attacks of September 11 were aimed at making the United States accept :

on the inside, a system of mass surveillance (the Patriot Act) ;

and, externally, a resumption of imperial policy, about which there was no documentation at the time.

Things only became clearer in 2005, when Colonel Ralph Peters – at the time a Fox News commentator – published the famous map of the Joint Chiefs of Staff, the map of the “reshaping” of the “broader Middle East” [3]. It came as a shock to all chancelleries: the Pentagon was planning to redraw the borders inherited from the Franco-British colonization (the Sykes-Picot-Sazonov Agreements of 1916) without regard for any state, even an ally.

From then on, each state in the region did everything in its power to prevent the storm from falling on its people. Instead of uniting with neighboring countries in the face of the common enemy, each tried to deflect the Pentagon’s hand to its neighbors. The most emblematic case is that of Turkey, which changed its position several times, giving the confused impression of a mad dog. 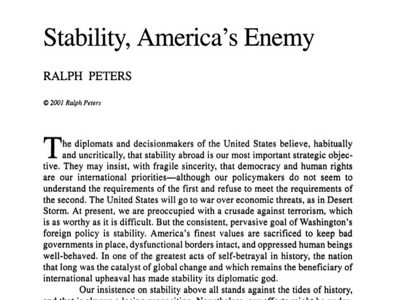 Two visions of the world clash. For the Pentagon since 2001, stability is the strategic enemy of the United States, while for Russia, it is the condition for peace.

However, the map revealed by Colonel Peters -who hated the Secretary of Defense, Donald Rumsfeld- did not make it possible to understand the overall project. Already, at the time of the September 11 attacks, he had published an article in the US Army magazine, Parameters [4]. He alluded to the map that he did not publish until four years later, and suggested that the Joint Chiefs of Staff were preparing to carry it out by means of atrocious crimes that they would have to subcontract in order not to dirty their hands. One might think that he was referring to private armies, but history showed that they could not engage in crimes against humanity either.

The final word on the project was in the “Office of Force Transformation,” created by Donald Rumsfeld at the Pentagon in the days following the 9/11 attacks. It was occupied by Admiral Arthur Cebrowski. This famous strategist had been the designer of the computerization of the armed forces [5]. One could believe that this Office was a way to finish his work. But no one disputed this reorganization anymore. No, he was there to transform the mission of the U.S. armed forces, as the few recordings of his lectures in military academies attest. 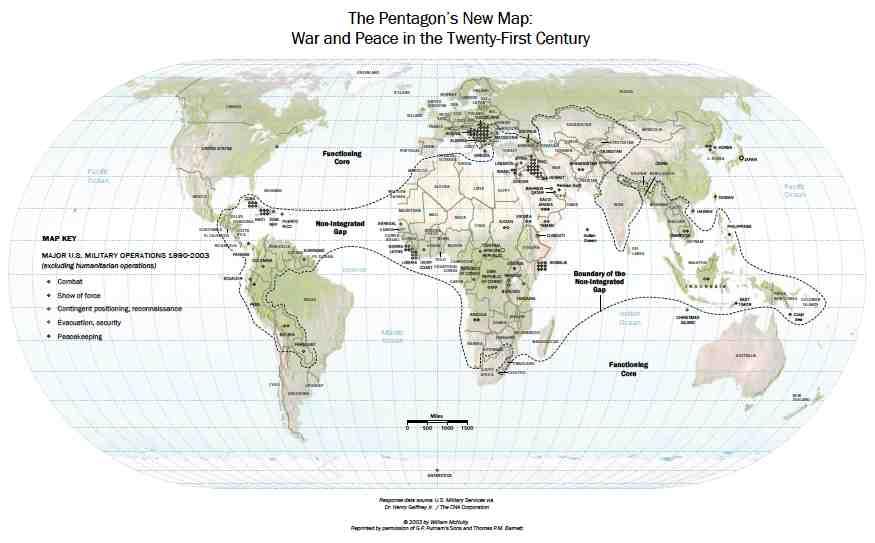 The target determined by Admiral Cebrowski is not only the “wider Middle East”, but all regions not integrated into the globalized economy.

What he was teaching was quite simple. The world economy was becoming globalized. To remain the world’s leading power, the United States had to adapt to financial capitalism. The best way to do this was to ensure that developed countries could exploit the natural resources of poor countries without political obstacles. From this, it divided the world into two: on the one hand, the globalized economies (including Russia and China) destined to be stable markets and, on the other, all the others that were to be deprived of state structures and left to chaos so that transnationals could exploit their wealth without resistance. To achieve this, the non-globalized peoples were to be divided along ethnic lines and held ideologically.

The first region to be affected was to be the Arab-Muslim area from Morocco to Pakistan, with the exception of Israel and two neighboring micro-states that were to prevent the fire from spreading, Jordan and Lebanon. This is what the State Department called the “broader Middle East. This area was not defined by oil reserves, but by elements of the common culture of its inhabitants.

The war that Admiral Cebrowski imagined was to cover the entire region. It was not to take into account the divisions of the Cold War. The United States no longer had any friends or enemies there. The enemy was not defined by its ideology (the communists) or its religion (the “clash of civilizations”), but only by its non-integration into the globalized economy of financial capitalism. Nothing could protect those who had the misfortune not to be followers, to be independent.

This war was not intended to allow the US alone to exploit natural resources, as previous wars had done, but for all globalized states to do so. Moreover, the United States was no longer really interested in capturing raw materials, but rather in dividing up work on a global scale and making others work for them.

All this implied tactical changes in the way wars were waged, since it was no longer a question of obtaining victory, but of waging a “war without end”, as President George W. Bush put it. Indeed, all the wars started since 9/11 are still going on on five different fronts: Afghanistan, Iraq, Libya, Syria, Yemen.

It doesn’t matter if allied governments interpret these wars in accordance with the US communication: they are not civil wars, but stages of a plan preestablished by the Pentagon. 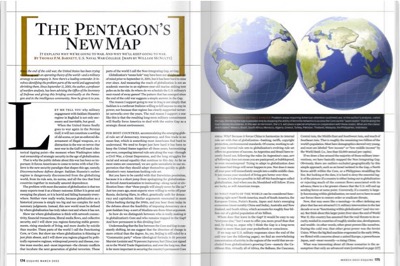 The “Cebrowski Doctrine” shook up the US military. His assistant, Thomas Barnett, wrote an article for Esquire Magazine [6], then published a book to present it in more detail to the general public: The Pentagon’s New Map [7]. 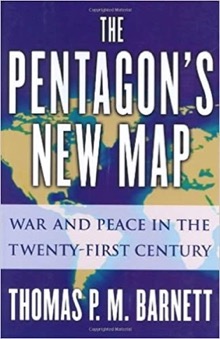 The fact that in his book, published after Admiral Cebrowski’s death, Barnett claims authorship of his doctrine should not be misleading. It is just a way for the Pentagon not to assume it. The same phenomenon had taken place, for example, with the “clash of civilizations”. It was originally the “Lewis Doctrine”, a communication argument devised within the National Security Council to sell new wars to public opinion. It was presented to the general public by Bernard Lewis’s assistant, Samuel Huntington, who presented it as an academic description of an inescapable reality.

The implementation of the Rumsfeld/Cebrowski Doctrine has had many ups and downs. Some came from the Pentagon itself, others from the people who were being crushed. Thus, the resignation of the commander of Central Command, Admiral William Fallon, was organized because he had negotiated a reasoned peace with Mahmoud Ahmadinejad’s Iran on his own initiative. It was provoked by… Barnett himself, who published an article accusing Fallon of abusing President Bush. Or again, the failure to disrupt Syria was due to the resistance of its people and the entry of the Russian army. The Pentagon has come to burn down crops and organize a blockade of the country to starve it; revengeful actions that attest to its inability to destroy state structures.

During his election campaign, Donald Trump campaigned against the endless war and for the return of the GI’s to their homes. He managed not to start new fronts and to bring some men home, but failed to tame the Pentagon. The Pentagon developed its Special Forces without a “signature” and managed to destroy the Lebanese state without the use of soldiers in a visible way. It is this strategy that it is implementing in Israel itself, organizing anti-Arab and anti-Jewish pogroms as a result of the confrontation between Hamas and Israel.

The Pentagon has repeatedly tried to extend the “Rumsfeld/Cebrowski doctrine” to the Caribbean Basin. It planned an overthrow, not of the Nicolás Maduro regime, but of the Bolivarian Republic of Venezuela. It finally postponed this. 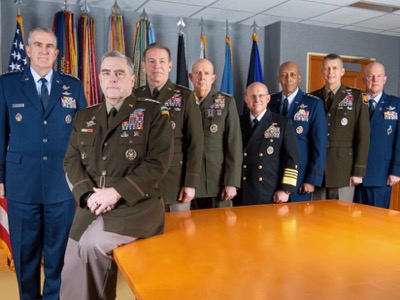 The eight members of the Joint Chiefs of Staff.

It must be noted that the Pentagon has become an autonomous power. It has a gigantic budget of 740 billion dollars, which is about twice the annual budget of the entire French state. In practice, its power extends far beyond that, since it controls all the member states of the Atlantic Alliance. It is supposed to be accountable to the President of the United States, but the experiences of Presidents Barack Obama and Donald Trump show the absolute opposite. The former failed to impose his policy on General John Allen in the face of Daesh, while the latter was led astray by Central Command. There is no reason to believe that it will be any different with President Joe Biden.

The recent open letter of former US general officers [8] shows that nobody knows who is in charge of the US military anymore. No matter how much their political analysis is worthy of the Cold War, this does not invalidate their observation: the Federal Administration and the general officers are no longer on the same wavelength.

William Arkin’s work, published by the Washington Post, has shown that the federal government organized a nebulous group of agencies under the supervision of the Department of Homeland Security after the September 11 attacks [9]. In the greatest secrecy, they intercept and archive the communications of all people living in the United States. Arkin has just revealed in Newsweek that, for its part, the Department of Defense has created secret Special Forces, separate from those in uniform [10]. They are now in charge of the Rumsfeld/Cebrowski doctrine, regardless of who is in the White House and what their foreign policy is. 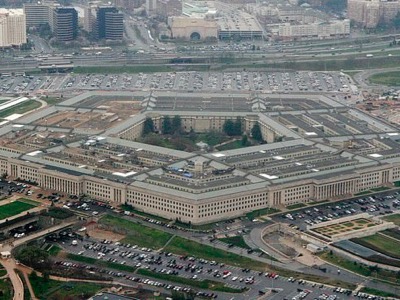 The Pentagon has a clandestine Special Forces of 60,000 men. They do not appear on any official document and work without uniform. Supposedly used against terrorism, they are in fact the ones who practice it. The classic armies are dedicated to the fight against Russian and Chinese rivals.

When the Pentagon attacked Afghanistan and Iraq in 2001, it used its conventional armies – it had no other – and those of its British ally. However, during the “endless war” in Iraq, it built up Iraqi jihadist forces, both Sunni and Shiite, to plunge the country into civil war [11]. One of them, derived from al-Qaeda, was used in Libya in 2011, another in Iraq in 2014 under the name of Daesh. Gradually these groups have replaced the US armies to do the dirty work described by Colonel Ralph Peters in 2001.

Today, no one has seen US soldiers in uniform in Yemen, Lebanon and Israel. The Pentagon itself has advertised their withdrawal. But there are 60,000 clandestine, i.e. non-uniformed, US Special Forces creating chaos, via civil war, in these countries.

[2] Contrary to popular belief, this book does not deal with the attacks of September 11. Only the first part (“Bloody staging”) demonstrates the material impossibility of the dominant version. The other two parts deal with the politics of mass surveillance (“Death of Democracy in America”) and the imperial project to come (“The Empire Attacks”).

[6] “Why the Pentagon Changes Its Maps. And why we’ll keep going to war”, Thomas Barnett, Esquire Magazine, March 2003.

The Middle East is reorganizing

0 thoughts on “The Rumsfeld/Cebrowski doctrine”