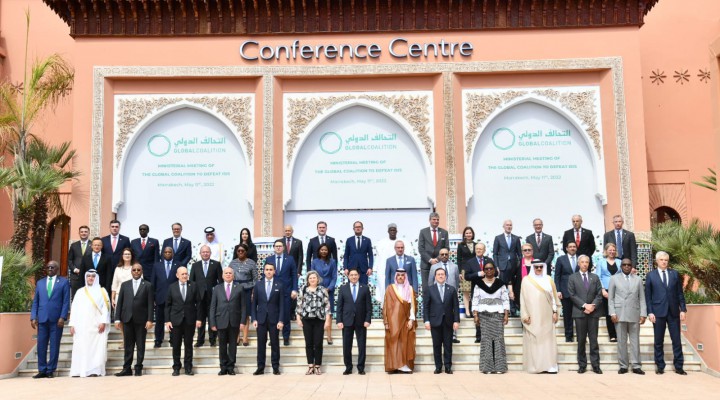 The war in Ukraine is a trompe l’oeil. Behind the appearances of the unity of NATO and its consolidation by new members, several big players run with the hare and hunt with the hounds. In reality, all those who are not blinded by their own propaganda know that their side is going to lose and is already planning other enemies on other battlefields. Washington is making the best of a bad situation and using Russian pressure to close ranks. 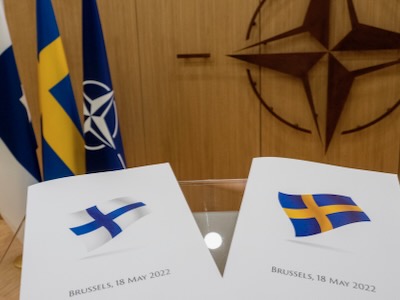 Finland and Sweden applied for NATO membership on May 18, 2022.

On the front of the stage, Nato assures that it has been strengthened by “Putin’s madness”. Ukraine, powerfully armed by the West, is leading a counter-offensive and pushing back the “invader”. At the international level, the sanctions are bearing fruit. Finland and Sweden, feeling threatened, decided to join the Atlantic Alliance. Soon the Russians will overthrow the “dictator” in the Kremlin.

This magnificent narrative is contradicted by the facts: only about a third of Western weapons reach the front. But the Ukrainian army is exhausted. Almost everywhere it is retreating and a few exploits do not change the overall picture. Two-thirds of Western weapons, especially the heaviest ones, are already available on the black market in the Balkans, particularly in Kosovo and Albania, which have become the main places for trafficking in this area. Western sanctions pose a risk of famine, not in Russia, but in the rest of the world and particularly in Africa. Turkey and Croatia are opposed to the accession of new members to NATO. It is possible to convince them, but at the price of radical political changes which the West has always opposed.

Even if Russia is wise enough to not celebrate its victory too loudly, as it did in Syria, it will be seen as the failure of the greatest military force in history, NATO. A victory without appeal, since the Atlantic Alliance was physically involved in the fight, while it stood around the battlefields in Syria. Many of Washington’s vassal states will try to break free. It is likely that their civilian leaders will remain mentally oriented toward the West, while their military leaders will turn more quickly toward Moscow and Beijing. In the years to come, the cards will be reshuffled. It will not be a matter of shifting from alignment with Washington to alignment with the new victors, but of creating a multipolar world where everyone is responsible for themselves. What is at stake is not a redefinition of zones of influence, but the end of the mentality establishing a hierarchy between peoples.

From this prospective point of view, it is fascinating to observe Western rhetoric. Many experts from the old world explain that Russia wants to rebuild its empire. They claim that it has already reconquered Ossetia and Crimea and is now attacking the Donbass. They reconstruct history with falsified quotes from President Putin. Anyone who studies contemporary Russia and checks the data knows that this is not true. The accession of Crimea to the Russian Federation and the future accession of Ossetia, Donbass and Transnistria have nothing to do with an empire, but with the reconstitution of the Russian nation, which was dismembered during the collapse of the Soviet Union.

In this context, a small part of the Western leadership is beginning to challenge the choices of their American overlord. The same phenomenon took place during the last trimester at the end of the mandate of French President Nicolas Sarkozy. The latter, seeing the human disaster he had contributed to provoke in Libya and his failure in Syria, agreed to negotiate a separate peace with Damascus. However, Washington, furious with his independence, organized his electoral defeat in favor of François Hollande. In the days following his accession to the Élysée Palace, the latter re-launched the Western war machine for a decade. It is precisely at this time that Russia committed itself to intervene in Syria. For two years it finished developing new weapons, then came to fight the jihadists armed by the West and directed by NATO from its Allied Land Command in Turkey.

While Nato’s watchwords triumphed in the Western press, our studies on the history, significance and place of the Banderists in contemporary Ukraine were widely circulated in leadership circles around the world. Many of Washington’s “allies” now refuse to support these “Ukrainians” whom they know are neo-Nazis. They consider that, in this fight, it is Russia that is right. Germany, France and Italy have already authorized certain members of their governments to talk with Russia without this changing the official policy of their countries. At least these three members of the Atlantic Alliance are carefully playing a double game. If things go wrong for NATO, they will be the first to turn around.

Similarly, the Holy See, which came close to preaching a new crusade against the “Third Rome” (Moscow) and circulated photographs of the Pope praying with wives of Banderist members of the Azov regiment, has also made contact not only with Patriarch Cyril, but also with the Kremlin.

All these contacts, however discreet they may be, annoy Washington, which is already trying to remove the secret emissaries. But precisely the fact that they have been officially dismissed gives these emissaries more room to negotiate. The important thing is that they are accountable to the right people for what they do. This is a dangerous game, as evidenced by President Sarkozy’s electoral defeat when he tried to free himself from his American sponsor.

Let’s try to take a step back from the events and see how they could evolve.

For Turkey and Croatia to accept Finland’s and Sweden’s membership in NATO, NATO would have to agree to their conditions. For Turkey, these are (1) the inclusion of the PKK and Hizmet (Fethullah Gülen) on the lists of terrorist organizations, the arrest and extradition of their members, (2) the reinstatement of its arms industry in the F-35 manufacturing program, and for Croatia (3) the change of electoral laws in Bosnia-Herzegovina in order to grant political equality to its Croat minority.

The PKK does not represent Kurds in general, but only some of them. It began as a Marxist-Leninist party fighting the Turkish military dictatorship during the Cold War. Then, after the arrest of its leader and the dissolution of the USSR, it changed sides and became a libertarian party serving the Pentagon in the Middle East. Today, it is a mercenary militia that serves as a cover for the US occupation in Syria. To consider it a terrorist organization would mean evacuating the GIs from Syria and returning the oil wells to Damascus.

Fethullah Gülen is the spiritual father of a large charitable organization with a presence in many countries. Extraditing him from the United States and considering his organization as terrorist would deprive the CIA of relays in many African and Turkish-speaking Asian countries. This would only be conceivable for Washington if AfriCom were deployed on the African continent instead of being exiled to Germany. Negotiations are underway to establish it in Somaliland, which would become an internationally recognized state.

Given the long series of attacks that the PKK has carried out in Turkey and the attempted assassination of President Erdoğan followed by the attempted coup in July 2016 in which Hizmet played a central role on behalf of the CIA, Ankara is legitimate in its demands.

Reinstating Turkey among the F-35 manufacturing nations costs nothing, but its delisting was a sanction in the face of the Turkish military’s purchase of Russian S400 anti-aircraft weapons. Giving satisfaction to Ankara in order to enlarge Nato in the face of Russia would be, to say the least, contradictory and illegible. Moreover, having F-35s manufactured by a power that has not been shy about criticizing their alleged quality could also prove embarrassing.

Bosnia-Herzegovina was created by the Straussians (Richard Perle was not a member of the American, but of the Bosnian, delegation to the Dayton Accords). It was imagined as a homogeneous entity in accordance with Straussian thinking. The Croat minority (15% of the population) was therefore ostracized. Their language is not recognized and they have no political representatives. To accede to the demand that Croatia is making on their behalf would mean calling into question the reasons why the Straussians organized the wars in Yugoslavia (to separate ethnic groups and create homogeneous populations). Moreover, it is the Straussians who are at work in Ukraine.

Assuming that these three conditions are fulfilled or that the political leaders who formulated them are overthrown, the enlargement of the Atlantic Alliance to include Finland and Sweden would confirm the change in the nature of Nato. It would no longer be a structure aimed at stabilizing the North Atlantic region as stipulated in the Treaty, which led President Boris Yeltsin in 1995 to seriously consider joining his country. Nato would complete its transformation into a US military administration of its Western empire.

HYPOTHESIS 2: WESTERN SANCTIONS AND MILITARY AID ARE INTENDED TO PREPARE OTHER CONFLICTS

Let us now look at the real consequences of Western sanctions. The measures to exclude Russia from the international financial system do not affect it. It continues to import and export as much as necessary, but it is forced to change suppliers and customers. It is rapidly setting up the equivalent of SWIFT with the Brics (South Africa, Brazil, China and India) but it can no longer trade directly with the rest of the world. It is already impossible to buy potash fertilizer in Africa. Indeed, Russia and Belarus are the main exporters. A famine is brewing. The Secretary General of the United Nations, António Guterres, has already sounded the alarm. He is asking that the West allow an exemption to their embargo on potash fertilizers.

In the most likely case, that Washington will not change its policy, famine will lead to new wars and large-scale migration to the European Union.

It is surprising to say the least that after the fall of Mariupol, the United States was willing to send an additional 40 billion dollars to Ukraine where it had already lost another 14 billion dollars. In reality, two-thirds never reached their destination. These sums have been misappropriated. Soon about 18 billion dollars of weapons will be available in Kosovo and Albania. Either the Pentagon is throwing money around or it is investing by keeping this huge arsenal out of the sight of Congress.

The U.S. Under Secretary of State for Political Affairs, Victoria Nuland, therefore travelled to Morocco on May 11 to chair a meeting of the Global Coalition against Daesh. 85 states participated at the level of their foreign ministers. Predictably, Ms. Nuland denounced the re-formation of Daesh, no longer in the Middle East, but in the Sahel. She invited all participants to join the US in fighting this enemy. However, as everyone had seen the massive Pentagon support for the jihadists in Iraq and Syria, all the diplomats present understood that the storm would soon break. Weapons were missing and the Pentagon did not want to be caught in the act of delivering them again to the jihadists. It will just have to get them from the Balkans, where they are still waiting for their end users in their crates.

A war in the Sahel will not be a problem: it will spare the great powers and will only result in African victims. It will last as long as it is fed and no ally will allow itself to notice that this conflict only exists since they invaded and destroyed Libya. Everything can continue as before: for a part of humanity, the world will remain unipolar with Washington at its center.