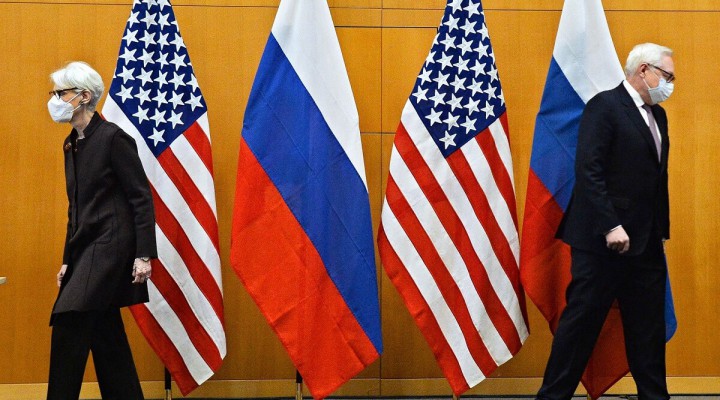 During the whole week, Moscow has been waiting for an answer to its proposal for a Treaty guaranteeing peace. Washington has never mentioned it. On the contrary, it has accused Russia of preparing to attack Ukraine and of planning a false flag operation to justify it. Russia can no longer back down, but any action on its part risks opening a third world conflict.

The Western press fails to follow the relationships between the Big Three (China, the United States and Russia) because it segments them. It considers each issue separately and ignores the links between them. Above all, it ignores the difference between Anglo-Saxon and UN law, which leads to many misinterpretations.

The United States and Russia met three times this week to discuss peace guarantees:
in Geneva at the level of deputy foreign ministers ;
in Brussels in the NATO-Russia Commission ;
and finally in Vienna, at the OSCE.

The United States reiterated its warning against the stationing of 100,000 Russian troops on the Russian-Ukrainian border, while Russia expressed indignation at the US refusal to discuss its peace proposal.

At the same time, the US Congress debated sanctions against Russia, while the State Department extended its attitude towards Russia to China, and the Department of Defense is considering increasing its nuclear arsenal.

In the background, Washington has been conducting a destabilization operation in Kazakhstan and the European Union has set up a total economic blockade of Transnistria.

If the United States refuses further to take into account the reproaches addressed to it and to respond to Russian arguments, Moscow is now threatening to deploy troops in the Caribbean basin.

The only positive step forward is a possible relaunch of U.S.-Russian negotiations on the control of intermediate-range nuclear missiles, a treaty rejected by President Donald Trump.

When the U.S. delegation arrived in Geneva, it first had a friendly dinner with its Russian counterparts and then, the next morning at the start of the talks, informed them that its mandate was limited to discussing the deployment of U.S. and Russian troops in Ukraine.

“Other priorities are more important for us: non-expansion of Nato, elimination of the infrastructure created, refusal of certain measures, and not on a reciprocal basis, but on a unilateral basis on the part of the West”, Sergey Riabkov had already declared on arriving in Geneva [1].

So the Russians responded that the mandate of the US delegation was only incidental to the official purpose of the meeting: guarantees for world peace. Then Wendy Sherman and Sergey Riabkov reviewed the topics they could discuss later and found only one: a new Intermediate Nuclear Missile Reduction Treaty; the INF Treaty having been denounced by President Donald Trump.

The next day Wendy Sherman attended the NATO-Russia Commission meeting in Brussels. Allied ambassadors were having difficulty assessing Washington’s intentions after its abandonment of Afghanistan to the Taliban and its betrayal of France with the AUKUS agreement. Ms. Sherman let them speak first, and then she told the Russian delegation: “Of course, there are thirty of us here facing you, but we are only one on our positions”. Then she drew a picture of what Europe would become if Washington gave in to Moscow: once again a continent divided into two zones of influence, one Atlanticist, the other Russian, as during the Cold War.

This presentation awakened terrible memories so that the Allied ambassadors heard nothing else. The Russian delegation’s denials that it was not Soviet and did not want to share the continent were just background noise. Perhaps the Russians again presented their demands to respect the UN Charter and their word, nobody remembers.

The US press commented on this meeting by saying that it had given Nato, decried by Presidents Donald Trump and Emmanuel Macron, a new reason to exist: to fight Russia.

Under these conditions, the third meeting, that of the OSCE in Vienna, was only – in the words of Sergey Lavrov – “dilatory”. The OSCE has no decision-making power, it is just a forum created during the Cold War to evaluate positions. The Swedish chairmanship of its Permanent Council reflected the image of this country, officially neutral, but internally debating its next membership in NATO. The allies were on the defensive, while the United States itself sought to gain time. The meeting did not even produce a final communiqué.

Moscow was expecting a wholesale rejection of its proposals by Washington, but it was astonished by the way US diplomats managed to manipulate the members of NATO and the OSCE. This is the second time that Vladimir Putin has come up against the irrational behavior of the European Union. Remember, in 2007, he thought he could distance Western Europeans from their American overlord by going to the Munich Security Conference and asking them to ask themselves what their interests were [2]. He mistakenly believed that he would get their attention, especially that of the Germans. The same thing is happening today.

It is clear that most European leaders, with the notable exception of the Russians, do not want to be independent. They renounce their own responsibility and prefer to grovel before an illegitimate and cruel world order.

In Washington, the White House is aware that it can no longer afford its global policy, but the ruling class is not. Congress has been the scene of grandiloquent pronouncements denouncing Russian impudence and particularly that of its president, Vladimir Putin. Parliamentarians have gone so far as to discuss sanctioning him in name, which would mean breaking off diplomatic relations with his country. None of them seem to be aware that the United States is no longer the world’s leading military power and that Russia and China have replaced it.

Less stupid than sanctions against President Putin, Congress has mostly been squabbling over the possible reinstatement of sanctions against the Russian Nord Stream 2 gas pipeline. Republican Senator Marco Rubio defended the idea that the Germans should be punished for making a pact with “the devil”, including the former Social Democrat Chancellor Gerhard Schröder who piloted the construction of the pipeline, so that they would have no choice [3]. Instead, the Democrats, on the advice of the White House, argued that it would be better to get the Germans to choose the right side themselves, rather than forcing them to do so. The Ukrainian government supported this common sense approach by pointing out that the Germans had negotiated guarantees with Russia that it would not use its gas supplies as a weapon [4].

This ludicrous debate was only possible because everyone has forgotten the reason that led President Joe Biden to lift the sanctions against Nord Stream 2 just before the Russian-US summit in Geneva [5]: it was a way to pass on to the Europeans the bill for the war damage in Syria. They would pay for cheap Russian gas, but a little less cheap than expected. Nobody even remembers that the United States lost this war.

EVERYTHING CONTINUES AS IF NOTHING HAD HAPPENED

Far from giving in on the substance, the State Department has extended its Russian narrative in the face of China, which supports Russia. Not only would Russia like to invade Ukraine and extend its rule to all of Eastern and Central Europe, but China would like to conquer the entire China Sea.

The State Department relies on a 2016 Hague Court of Arbitration decision, condemning China in a territorial dispute with the Philippines, to dismiss Beijing’s arguments [6]. However, an arbitration court is not a tribunal, and since China does not recognize this court, it did not arbitrate anything, but only endorsed the Philippine version of the dispute. Far from establishing anything, this episode attests to the way the United States interprets international law in general and the UN Charter in particular.

China rightfully claims the islands it ruled in the 18th century and abandoned when it collapsed under the onslaught of colonization. Most of them remained uninhabited until about 30 years ago, that is, until the dissolution of the Soviet Union. The United States, in claiming them for its allies in this area, is demonstrating the same conquering imperialism as in placing Central and Eastern Europe under the command of Nato.

Moreover, during this week, Washington has continued its operation of destabilization of Kazakhstan and support to the calls for the overthrow of the regime proclaimed by Mukhtar Ablyazov from Paris. Finally, it encouraged the European Union to organize a blockade of Transnistria, the unrecognized state wedged between Ukraine and Moldova [7]. If it seems to have lost in Kazakhstan, it is already preparing the next episode in Transnistria.

The United States is cloistered in its denial and is sending emissaries to each of its vassals to warn them of an imminent Russian attack on Ukraine following a false flag provocation.

This week has predictably shown that the United States does not intend to respect either the UN Charter or its word. It will not back down anywhere on its own. Its proposals are at best aimed at preserving the status quo.

The US strategy seems to be based on the idea that the Russians and the Chinese will not dare to confront. It is the “madman theory” once used by President Richard Nixon against the Soviet Union: yes, I am wrong and I may not be the strongest, but I am crazy and my reactions are irrational and unpredictable. I don’t care if I win, I can break everything. This attitude is like a gamble. It did not allow the USA to win the Vietnam war.

Russia had obviously foreseen the next move when it published its draft treaty guaranteeing peace. However, it will have to adapt it because Washington has succeeded in rallying all its frightened vassals. If there is to be a confrontation, it will be nuclear and will surely result in hundreds of millions of victims.

If Washington is planning the next skirmish in Transnistria, Moscow is preparing to play the next move, probably in the Caribbean basin, on the model of the 1962 Cuban missile crisis. It would be a matter of provoking a shock that would make the American ruling class realize that it no longer has the superiority that it has been using and abusing so much.

[1] “Riabkov expects US to face up to its responsibilities”, Voltaire Network, 10 January 2022.

[2] “The unipolar governance is illegal and immoral”, by Vladimir Putin, Voltaire Network, 11 February 2007.

[4] Document send by Naftogaz to the US Congress, Voltaire Network, January 12, 2022

No dialogue has begun. Washington could not care less about Russia’s security concern

For Fox Sake… Has US Any Intelligent Diplomats?

0 thoughts on “Washington refuses to hear Russia and China”