HOME / WORLD / The alliance of MI6, the CIA and the banditry 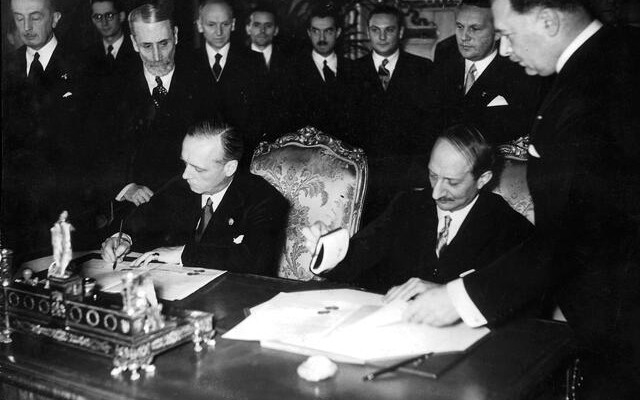 After having shown that the war in Ukraine was prepared by the Straussians and triggered on February 17 by Kiev’s attack on the Donbass, Thierry Meyssan returns to the secret history that links the Anglo-Saxons to the Banderites since the fall of the Third Reich. He sounds the alarm: we have not been able to see the resurgence of Nazi racialism in Ukraine and in the Baltic States for thirty years, nor do we see that many of the Ukrainian civilians we welcome are steeped in Banderites’ ideology. We are waiting for Nazi attacks to begin in Western Europe before we wake up.

The massive support of the United States and its allies for the Ukrainian Banderites against Russia is comparable to the support of the same side in the early days of Hitler’s Germany against the USSR. Let us remember that absolutely all Western states without exception believed, at one time or another, that the Nazis were the solution to the economic crisis of 1929. Only they seemed to offer a credible alternative to capitalism. Of course, almost all of these people changed their minds when the Nazi danger turned against them.

As an example, let us recall that the French Foreign Minister, Georges Bonnet, enchanted by the Jewish policy of the Reich, proposed to his German counterpart, Joachim von Ribbentrop, to deport French, Polish and German Jews to a distant colony, Madagascar [1]. On December 6, 1938, the same Georges Bonnet signed the Franco-German Commitment to Peaceful Collaboration with Joachim Ribbentrop, the Reich Foreign Minister.
British Prime Minister Neuville Chamberlain organized the Munich Agreement of September 30, 1938, which liquidated Czechoslovakia for the benefit of the Reich [2], while the Governor of the Bank of England, Montagu Norman, stole 27 tons of Czechoslovakian gold to help strengthen the Nazi armies [3].
Or Prescot Bush, the father of President George H. Bush and the grandfather of President George W. Bush, invested in 1940 in the factories of the Auschwitz prison camp (which only became an extermination camp in 1942) [4].

After the fall of Nazism, these people were not brought to justice. On the contrary, efforts were made to close ranks and to forget these felonies. Let us be careful not to repeat the same mistakes!

THE ROLE OF THE UKRAINIANS DURING THE COLD WAR

During the Second World War, the theoretician of Nazism Alfred Rosenberg and Minister of the East (Ostminister) entrusted the Latvian Gerhard von Mende to organize the rallying of the peoples of the USSR to the Führer Adolf Hitler. In doing so, he devised a model for the manipulation of minorities that was taken up by the CIA after the fall of the Third Reich. With the help of the Grand Mufti of Jerusalem, Amin al-Husseini, Von Mende created schools for mullahs in Göttingen and Dresden, had a Grand Mufti appointed in the Crimea, and enlisted Eastern SS regiments. He was also the handler of the Ukrainian “nationalist” Stepan Bandera.

In Washington, Presidents Truman and then Eisenhower decided to focus on psychological warfare against the Soviets. The CIA created AmComLib (American Committee for the Liberation of the Peoples of the USSR), which operated Radio Liberty from Munich. It recycled Gerhard von Mende. It was he who proposed the establishment of a mosque in Munich, which was eventually entrusted to Said Ramadan (the son-in-law of the founder of the Brotherhood Hassan el-Banna) [5]. It was also he who settled Stepan Bandera’s problems and recycled him to MI6 and the CIA [6].

Stepan Bandera’s former deputy and Nazi-imposed Ukrainian Prime Minister, Yaroslav Stetsko, was on the instructions of the Third Reich one of the founders of the Anti-Bolshevik Bloc of Nations (ABN) during World War II. He continued the ABN during the Cold War, this time for the United States. As such, he became a pillar of the World Anti-Communist League (WACL) formed by the CIA [7].

forces). Several operations were planned in collaboration with the CIA and MI6, i.e. under the supervision of Frank Wisner (Nicolas Sarkozy’s grandfather by marriage) and Kim Philby. But the latter betrayed the Crown and passed on information to the KGB, which failed [8].

One of Yaroslav Stetsko’s collaborators, Lev Dobriansky, became U.S. ambassador to the Bahamas, while his daughter Paula Dobriansky served as Under Secretary of State for Democracy (sic) in the George W. Bush administration. It was Mrs. Dobriansky who financed for ten years historical studies aimed at making people forget that the Holodomor, the great famine that hit Ukraine in 1932-33,

also devastated Russia and Kazakhstan, and to make them believe that it was decided by Stalin to eliminate the Ukrainian people. This myth is manipulated by the Banderites to make people believe that the Russians have hated the Ukrainians for centuries. The European Parliament endorsed it in 2008 [9]. Afterwards, Paula Dobriansky held high positions at the Reuters agency and now works at the Atlantic Council. She was vice-president of the NED during the Maidan putsch.

President Ronald Reagan and Vice President George H. Bush welcomed the Banderites, including Yaroslav Stetsko, in 1983 at the White House [10].

Bandera was assassinated by the KGB in 1955. Stetsko died in 1986. Both men are buried in the German cemetery of Walffriedhof.

ANGLO-SAXON SUPPORT FOR THE JIHADISTS

In 1979, U.S. President Jimmy Carter authorized “Operation Hurricane”. The idea was to send Arab jihadists, members of the Muslim Brotherhood, to Afghanistan to fight against the communist government. It was then that this small terrorist organization became a real army [11]. One thing led to another, from the wars in Afghanistan to those in Yugoslavia and Chechnya, and finally to Daesh in Iraq and Syria [12].

For forty years, all Nato member states have been invited to provide “political asylum” to jihadists “persecuted” by Arab dictatorships. At least 17 allied states participated in “Operation Timber Sycamore”, supplying billions of dollars worth of weapons to the jihadists [13] until they threatened the West. Let’s be careful not to repeat the same mistakes!

During the Cold War, former specialists in Nazi repression were integrated by the United States into its anti-Soviet apparatus. One remembers, for example, the “Butcher of Lyon”, Klaus Barbie, who became chief of repression in Bolivia, or Alois Bruner, who became a special adviser to the Syrian president (before the Ba’ath) after having exterminated Jews in Austria, Greece and France. However, this seemed to have stopped with the dissolution of the USSR.

However, Banderite, Ustasha and Nazi militias emerged in the public space with the dissolution of the Warsaw Pact and the independence of the former Soviet states. They obtained the support of the Anglo-Saxons in the name of the collaboration of their parents during the Cold War. As examples we recall:

In Bulgaria, an annual event in memory of General Hristo Lukov has been held in Sofia for about 15 years [14].
In Estonia, it started in 2009 with the return of the ashes of SS Colonel Alfons Rebane (the “Estonian Rommel”), followed by the laying of a commemorative plaque [15], each time with the strong support of President Toomas Hendrik Ilves (himself a US official). Defense Minister Urmas Reinsalu visited the island of Saaremaa in 2012 to participate in a ceremony of the “Alliance of Estonian Freedom Fighters” (Nazi collaborators) and congratulate former SS men for “liberating the homeland” [16]
In Latvia, President Vaira Vīķe-Freiberga (1999-2007) claims that the “SS were heroes of the anti-Soviet struggle.” She had school history textbooks changed and authorized events commemorating these “heroes ». Latvia, where a quarter of the population is Russian, has banned the use of Russian in secondary schools. In addition, along with Estonia, it built a wall on its Russian border in 2018 [17]
In Bolivia, MI6 relied on the Croatian Ustasha community to overthrow President Evo Morales, in 2019 [18]

On November 18, 2020, the 3rd Committee of the UN General Assembly adopted a resolution on “Combating the glorification of Nazism, neo-Nazism and other practices that contribute to fuelling contemporary forms of racism, racial discrimination, xenophobia and related intolerance” (UN A/C.3/75/L.49). All UN members voted “for”, only the United States and Ukraine voted “against”. All members of Nato and the European Union abstained.

On May 8, 2007, in Ternopol (western Ukraine), Nazi and Islamist groups created an “Anti-Imperialist Front” to fight together against Russia. Organizations from Lithuania, Poland, Ukraine and Russia participated, including Islamist separatists from Crimea, Adygea, Dagestan, Ingushetia, Kabardino-Balkaria, Karachaevo-Cherkessia, Ossetia and Chechnya. Dokka Umarov, the Emir of Chechnya, who is considered by the United Nations to be a member of al-Qaeda, was unable to attend due to international sanctions. The Front is chaired by Dmytro Yarosh, who went to fight in Chechnya. Together with Andriy Biletsky, the “White Führer”, he created the Right Sector, which led the EuroMaidan revolution, and later the Azov Battalion. Since November 2, 2021, he has been an advisor to the commander-in-chief of the Ukrainian army, General Valerii Zaluzhnyi.

On April 7, 2022, President Zelensky spoke before the Greek Parliament. He played a short video during his speech. A Ukrainian of Greek origin introduced himself as a member of the Azov regiment and praised his faction’s fight against the Russians.

Since the dissolution of the USSR, Ukraine has revived its old demons. School history textbooks have been changed. For thirty years, children have been taught in school that their country was only independent thanks to the Nazis and that they have no genes in common with the Russians, that inferior race. Every year tens of thousands of children and teenagers attend the “summer camps” of the Banderites, just as the Hitler Youth did. They chant their slogan: “Glory to Ukraine”. These young people, girls and boys, find today asylum in the European Union. Tomorrow, like their Muslim Brotherhood allies, some of them will commit attacks there.

Already, the Bandéristes are recruiting cadets in Canada, France, Germany, Poland, the United Kingdom and the United States and now officers in the military academies of these countries. For this purpose, they have created, in 2019, a secret order, Centuria, which spreads their ideology. This order is opposed to democratic procedures and universal suffrage. Its members recite the “Prayer of the Ukrainian Nationalists”, written by Josef Mashchak during the interwar period. They display the Danish Sun Cross and multiply references to the Thule Order, to which very high Nazi dignitaries belonged. Western armies did not take this threat seriously. This ideology, like that of the Muslim Brotherhood in the Middle East, is spreading like wildfire.

The foul beast is already here, among us.

How can we be so blind?

[5] A Mosque in Munich : Nazis, the CIA, and the Rise of the Muslim Brotherhood in the West, Ian Johnson, Houghton Mifflin Harcourt (2010).

[8] MI6, Inside the Covert World of Her Majesty’s Secret Intelligence Service, Stephen Dorril, The Free Press (2000).

[11] “The Muslim Brotherhood as an auxiliary force of MI6 and the CIA”, by Thierry Meyssan, Translation Pete Kimberley, Voltaire Network, 11 July 2019.

Russia declares war on the Straussians

Washington sounds the alarm, while its allies withdraw

0 thoughts on “The alliance of MI6, the CIA and the banditry”