HOME / WORLD / THE NINTH OF MARCH: A HISTORICAL DAY IN THE HISTORY OF BAHRAIN 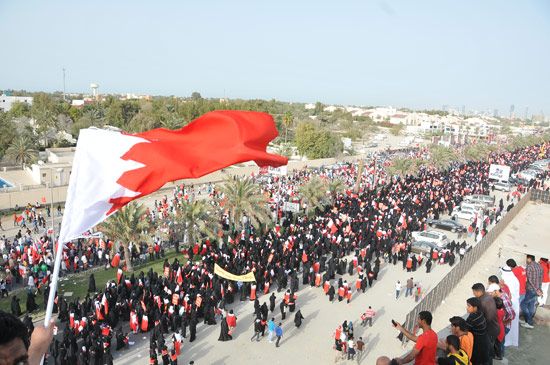 Exclusive- It was the 9th of March 2012, tens of thousands of Bahrainis poured into the Budaiya Hwy, which runs to Manama, in what is considered the largest pro-democracy march or public referendum in the history of Bahrain. The peaceful protesters carried national banners and called for the release of political detainees. This anti-government rally was mostly peaceful ever since the authorities violently quelled the February 2011 popular sit-in of the Pearl Roundabout with help from Saudi troops.

Bahrain, home to the US Navy’s Fifth Fleet and it is a significant oil and gas producer majority, has long been persecuting the Shiite community, who make up about 70% of the country’s 525,000 citizens.

Ayatollah Sheikh Isa Qassim, Bahrain’s top political and spiritual leader, had made a speech days before the rally, calling the people to participate in a peaceful popular demonstration, which is “inclusive of all spectrums and audiences who are ambitious for reforms and political demands.”

It was a political popular referendum in the sense that it has responded to the bidders who bet on the end of this peaceful demanding movement in light of the escalation of repressive practices, hysterical security option, killing, arrest, torture, sectarian discourse, military trials, exiles and citizenships revocations.

More than 500,000 Bahrainis participated in the rally in response to the king’s claims that the opposition is a few people, calling for constitutional reforms, the departure of the occupying Saudi forces, the release of political detainees and the transition to genuine democracy.

The 9th of March has not only formed a popular referendum on the demand of the Bahraini people in determining its fate but also reflected a high level of awareness, peacefulness, persistence and steadfastness; and conveyed a message that those claiming freedom and democracy are not a few fragments but rather the majority of the people of Bahrain and their demands are legitimate.

0 thoughts on “THE NINTH OF MARCH: A HISTORICAL DAY IN THE HISTORY OF BAHRAIN”