HOME / WORLD / Manama Steps Up Its Clampdown On Inmates 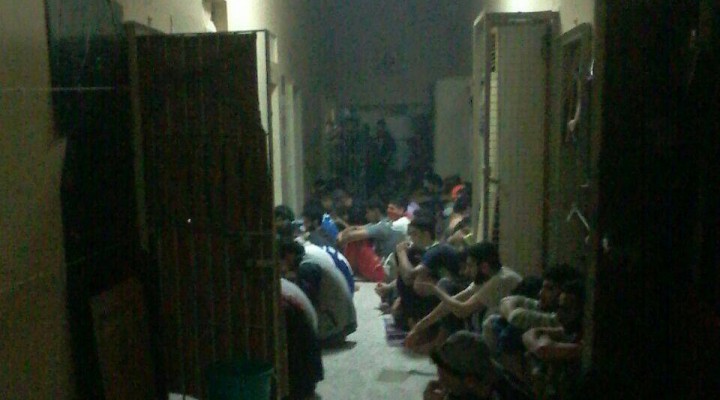 Exclusive, Cundus Yusuf-  The Bahraini government is party to the Convention Against Torture, the International Covenant on Civil and Political Rights, and the International Covenant on Economic and Cultural Rights, which means it has pledged not to subject citizens to arbitrary detention; to treat detainees with humanity and respect; to guarantee that their trials are conducted fairly by a competent, independent and impartial tribunals. Nevertheless, upon monitoring its status quo in recent years, Manama has repeatedly been accused by Int’l human rights groups of blatantly violating the inalienable rights of its prisoners mainly in the Jaw Central Prison, despite its ratification of these internationally recognised covenants.

These covenants stipulate that prisoners have rights, even when they are held incommunicado; nonetheless, the Bahrain government takes no notice of hundreds of detainees’ health, ahead of its heavy-handed clampdown on the peaceful opposition. The ICCPR specifically provides that they ”should be treated with humanity and with respect for the inherent dignity of the human person.” Besides, the United Nations, in its Standard Minimum Rules for the Protection of Prisoners set down standards that include principles for providing health care in custody, which makes states accountable for the way they act or fail to act.

Since the onset of the popular uprising in February 2011, demanding to transform the absolute monarchy into a constitutional one, many of those peacefully exercising their rights to freedom of assembly, association or belief and expressing opinions critical of the government have been subjected to arbitrary detention. In many cases justice has been applied selectively and charges have been fabricated. Many of those critics have been tortured to extract confessions, have been convicted following unfair trials that were not conducted in line with international fair trial standards and they are now serving long terms of imprisonment in cruel, inhuman and degrading conditions.

Under the pretext of fighting terrorism, the government has shown no mercy to its opponents as a single tweet can lead you to be sentenced to years or life in prison. For instance, Nabeel Rajab, the prominent human rights defender, has been sentenced to five years in prison because he had denounced arbitrary detentions, torture and other serious human rights violations, which according to the government means ” defaming the monarchy.”

Those inmates have long been calling the prison authority to end its persecution, to remove barriers during family visitation, to end the isolation practice and to stop the torture. They are locked in solitary confinements for 23 hours a day, which prevent them from interacting with the rest of the inmates. The 45 minutes of recreation period is allowed in a narrow space with roughly three-metre-high steal walls surrounding the building from all directions.

The notorious prison’s conditions constitute a flagrant breach of the United Nations Standard Minimum Rules for the Treatment of Prisoners, aka Nelson Mandela’s Rules, where at least 3 deaths have been recorded due to the willful denial of treating dozens with critical injuries and chronic diseases. The inmates drink water in Clorox bottles and eat meals on nylon bags, instead of healthy plates. They endure insects and rats’ infestation, leakage of stagnant water, denial of adequate sunlight, rotten food, contaminated water, torture and ill-treatment.

Besides the inmates’ families are prevented from providing their sons with new clothes, as a result, dozens have been infected with scabies, which has rapidly spread due to suffocating overcrowding that exceeds the prison capacity. Scabies is a skin infestation caused by a parasitic mite known as the Sarcoptes scabies. Untreated, this contagious mite lives and reproduces on the upper layer of the skin causing severe itching, pimple-like skin rash, unbearable pain and permanent scarring. Yet, the Int’l community has not spared any efforts to put an end to this critical scabies outbreak, the systematic inhumane policy and the worsening sanitary conditions practised against hundreds of inmates, particularly in the recent 4 months.

Bahrain’s total prison population reaches over 4,000, i.e. a rate of 301 prisoners per 100,000 of the national population, according to a report published by the Institute for Criminal Policy Research. The judiciary is undermined by the persistent pressure of the government and, thus, it has failed to protect the rights of defendants. Let alone point out that the militarisation of the justice system to inflict human rights abuses upon its dissents is exemplary of the deteriorating human rights situation and failure to honour commitments to its obligations to the aforementioned treaties.

Prison conditions have long been abysmal in Bahrain and all attempts to revert or even ease the situation from inside the prison has gone in vain and the prison’s authority has instead escalated its repressive measures. Inmates report that family visits have been cancelled or severely limited, including visitation between imprisoned relatives. Also, sales from the prison shop have been banned as well as the educational and Shiite religious television channels. The inmates are forced to put on shackles outside their cells, their complaints are denied, hospital appointments have been cancelled and they are not allowed to access the toilet for extended periods.

Under the current system, the elected lower house has no power and is subject to an advisory board with members appointed by the king. The legislative and municipal elections are sham as the only candidates allowed are those who toe the line of the government. The royal family controls the politics and economy, while the majority of the population is treated as second-class citizens. Hundreds of opponents have had their citizenship revoked while granting it to thousands of foreign mercenaries who joined the security forces, to distort the demographic representation.

Bahrain has failed in its international legal obligations as:

Cundus Yusuf is a student of Law and human rights activist. Yusuf is based in Beirut and she is a researcher interested in documenting human rights violations and political developments in Bahrain.
Her Twitter account: @CundusY
Tags: BahrainHuman Rightsprison

0 thoughts on “Manama Steps Up Its Clampdown On Inmates”