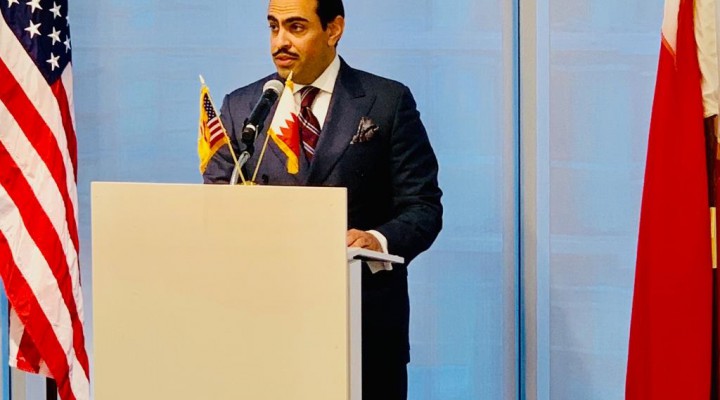 During a seminar organised by the Crown Center for Middle Eastern Studies at Brandeis University, Sheikh Abdullah bin Rashid Al Khalifa, Ambassador of Bahrain to the United States claimed that Bahrain is witnessing its best era of democracy.

In its overview for 2019, Freedom House, a U.S. government-funded NGO that conducts research and advocacy on democracy, political freedom, and human rights, says, Bahrain ”was once viewed as a promising model for political reform and democratic transition, but it has become one of the Middle East’s most repressive states.”

The organisation adds, ”Since violently crushing a popular pro-democracy protest movement in 2011, the Sunni-led monarchy has systematically eliminated a broad range of political rights and civil liberties, dismantled the political opposition, and cracked down harshly on persistent dissent in the Shiite population.”

Bahrain’s Ambassador said “comprehensive reform approach” has laid the foundations for “coexistence, cultural pluralism and religious tolerance” as Bahrain “welcomes everyone and always works to promote openness and accept various cultures and religions”.

Since Feb 2011, Manama has embarked on a systematic campaign to clamp down on political opposition, human rights defenders, journalists, Shiite clerics and peaceful protesters. Shiite clerics have been disproportionately targeted; there is no one left who has not been detained, exiled or denaturalised.

The ambassador emphasised that Bahrain embarked on this “democratic” path, “almost 100 years ago”, which extends to “all” groups of society, including “women”.

Instead of refining its image and glossing over its dismal human rights record through high rhetoric of self-praising, the ambassador and its government should immediately release Hajar Mansoor and Zakia al-Barbouri.

Mansoor is a high-profile activist and mother-in-law of exiled activist Sayed Ahmed Alwadaei. She has been persecuted as a form of reprisal against Alwadaei for his ongoing advocacy in support of democracy and human rights in Bahrain.

Al-Barbouri has been held in custody since May 17, 2018, after raiding her and had been held incommunicado for weeks. Bahrain’s Court of Cassation sentenced her to a five-year in prison. She was also stripped her of her citizenship after finding her guilty of trumped-up ”terrorism-related” charges. The authorities claimed that she was ”transporting materials used in explosive devices to an alleged cell,” confessions extracted under duress and torture.

The ambassador went on to say that Bahrain, as a “constitutional monarchy,” affirms at both the ”legislative and the practical”, its commitment to protecting the right to “freedom of expression,” but at the same time, the constitution “rejects incitement to hatred and violence”.

Manama has gone to great lengths to clamp down on any sign of dissent. In March 2017, it approved the trial of civilians at military tribunals, a measure blasted by various human rights bodies as being tantamount to imposition of martial laws.

Beneath the glamour of the ambassador’s claims, there is a far more sinister side to Manama, revealing its regime as deeply repressive, where any dissent is doomed to be detained merely for expressing their opinions, and where at least 3000 peaceful activists are in prison and are often labelled ”terrorists.”

The ambassador added that since the establishment of its parliamentary system, Bahrain has sought to become a model not only at the level of “political empowerment” but also as a pioneer in the field of “popular participation.”

Nonetheless, Bahrain’s prominent defenders of democracy are under relentless attack. For instance, Sheikh Ali Salman was shamefully convicted and sentenced to life in prison after deliberately convicting him for intelligence with the state of Qatar.

The ambassador eventually expressed Bahrain’s pride in the close historical relations, especially the strategic partnership that bring together Washington and Manama in the defence and security fields and their common commitment to “maintain international peace and security.”

Washington indeed views Bahrain as a strategic ally and lucrative market for business and investment. It is also concerned about the headquarters of its US Fifth Fleet. It has; however, failed to pressure Manama to ensure respect for human rights and an inclusive political system and to repeal laws, which criminalise freedom of expression and fast track the release of all prisoners of conscience