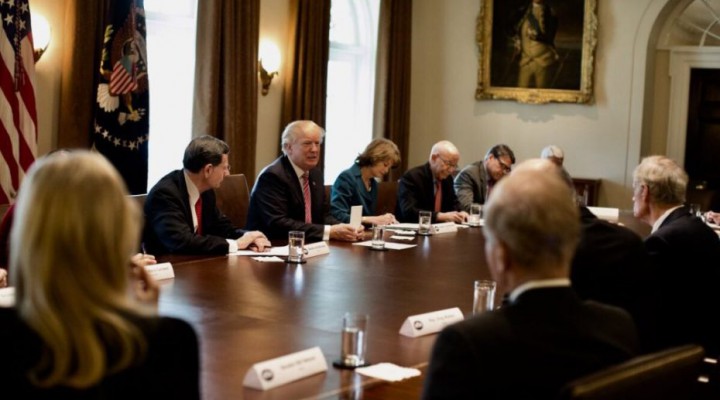 Trump has managed to unite Congress in provoking near-unanimous condemnation of his surprise announcement to withdraw US troops from northeast Syria.

For a change, President Trump managed to unite the US Congress this week – in provoking broad condemnation of his surprise announcement to withdraw American troops from northeast Syria.

All the more so because his ad hoc deal with Turkish President Recep Tayyip Erdogan has quickly spun out of control, launching a Turk offensive against Kurds in northeast Syria.

Turkey labels Kurdish militants “terrorists”, while the US has allied with them, having used them as proxies ostensibly to fight jihadist terror groups. (The US has also covertly sponsored the jihadist terror gangs, such as Islamic State, or ISIS, indicating that the real role of the Kurds for the Americans was to annex parts of Syria.)

Trump was assailed by Democrats and Republicans for his “betrayal” of the Kurds and for “destabilizing the Middle East”. Even political allies like Senate Republican leader Mitch McConnell and hawkish advisers Lindsey Graham and Marco Rubio joined the fray to lambast Trump over his apparent policy shift.

Hold on a moment. The reaction is no doubt hyperventilating over-reaction, which gives Trump way too much credit in making a “strategic decision”.

Closer to the truth is that this president, in typical loose-cannon fashion, simply stumbled into what appears to be a major policy shift, when in reality what he was after was a cheap PR boost for re-election next year.

After all, we are in American presidential campaign mode. That’s why the Democrats are gunning for impeachment based on flimsy “evidence” of Trump’s alleged collusion with Ukraine against Democrat rival Joe Biden.

For his part, Trump is, of course, seeking a bit of glory with voters, and that most likely explains his announcement last weekend ordering US troops to withdraw from northeast Syria. That followed a phone call with Turkey’s Erdogan on Sunday in which Trump apparently acceded to demands to give Turkey a free hand to make an incursion in northeast Syria to push back Kurdish fighters.

Erdogan appeared to assure Trump that Turk forces would take responsibility for running prisons holding thousands of ISIS terrorists. That’s implausible given Turkey’s past covert liaison with these jihadists, but to Trump’s ear that probably sounded a great idea to save America money.

Everything about how Trump made the announcement indicates that his main purpose was to win votes, without a care for repercussions in Syria. It was classic Trump making up policy on the hoof and without any fore-planning. It was all about him looking victorious and “bringing our troops home”. He mentioned how he was elected to bring an end to “ridiculous, endless wars”, and now that’s what he was purportedly doing with his latest initiative in northeast Syria.

It’s obvious that Trump hadn’t even thought through the ramifications. His only goal was to give himself a big pat on the back for “defeating ISIS 100 per cent”, and handing over security matters to Turkey, in order to get American troops home (as promised three years ago!) and to save US taxpayers loads of money. It was transactional Trump choosing the path of least costs.

To fend off criticism about betraying the Kurds, he inanely said later in the week that the Kurds were not important allies with the US anyway, since they hadn’t helped “us in the Normandy Landings during World War Two”.

After the Sunday phone call with Erdogan, the White House issued a statement Monday, saying: “Turkey will soon be moving forward with its long-planned operation into northern Syria. The United States armed forces will not support or be involved in the operation, and the United States forces, having defeated the ISIS territorial ‘caliphate’, will no longer be in the immediate area.”

That statement contradicts claims made later by both Trump and Mike Pompeo, the US Secretary of State, saying the US hadn’t given Turkey a green light to go on an offensive.

Trump probably had cluelessly forgotten, or overlooked, that the Turks would see the US pullout as a “green light” to make an incursion into Syria to hit the Kurds. He thought his deal with Erdogan was about sub-contracting out security to Turkey and save America money.

Because, when the torrent of condemnation from US lawmakers erupted over the next few hours, Trump was forced into a making a spectacular U-turn. Amid vilification for betraying the Kurds, the president then made a wild threat against Turkey, saying he would “obliterate” its economy if it attacked the Kurds. (So far, Turkey seems to have ignored Trump’s threats.)

Trump tweeted: “As I have stated strongly before, and just to reiterate, if Turkey does anything that I, in my great and unmatched wisdom, consider to be off limits, I will totally destroy and obliterate the economy of Turkey (I’ve done before!)…”

You can tell from his egotistical, blustering words, that Trump is way out of his depth on what he thought he had agreed to with Erdogan.

In subsequent remarks, it was even more obvious that Trump was floundering over what was supposed to be a “big policy shift” and also making stuff up to scramble himself out of a hole he had just dug for himself.

Speaking from the White House on Monday, he said: “We’ve been there [Syria] for many, many, many years beyond what we were supposed to be. Not fighting. Just there. Just there. And it’s time to come back home.

Media reports indicated that Trump had not consulted with “everybody”. The Pentagon seemed to be blindsided by his impromptu agreement with Erdogan. The British government was not “thrilled”; Downing Street warned against any Turkish incursion into Syria, saying it would flare up dangerous conflict.

The way Democrats and Republicans have grandstanded over Trump’s flippant decision-making is equally contemptible. All the criticism of Trump has revolved around the false, conceited notion that American military in Syria are a force for good in a supposed fight against terrorism. The outpouring of delusional American claims about its troops in Syria has been sickening. American forces are in Syria illegally, are guilty of war crimes, and should be removed immediately in disgrace.

If Trump actually did remove US troops from Syria then that would be an unmitigated good thing, so that the blighted country could begin to restore its territory and sovereignty after eight years of American-sponsored covert war for regime change using terrorist proxies.

But the hullabaloo over Trump’s electioneering gimmick is completely out of proportion.

The State Department and Pentagon were reported to have said the number of US troops withdrawing from northeast Syria were as little as 50 individuals. There are reckoned to be about 2,000 American troops in total in Syria. They are not coming home in their thousands to ticker-tape welcomes on Main Street. That was just Trump’s vote-catching spin. After all, it was a year ago that he first mentioned US forces withdrawing from Syria. They’re still there.

Turkey’s Erdogan likes to brag about taking military action. It’s not clear if a massive ground invasion will go ahead, following heavy shelling against Kurdish positions in Hasakah and Raqqa Provinces east of the Euphrates River. Several civilians have been killed, according to Kurdish Red Crescent and Syria’s SANA station. There maybe further cross-border skirmishing, but Erdogan knows the risks of getting bogged down in Syria are great.

Only last month during a trilateral summit in Ankara, Erdogan signed a joint statement with Russia’s Vladimir Putin and Iran’s Hassan Rouhani, in which the three leaders vowed to respect Syria’s sovereignty and territorial integrity. We can be sure that Moscow and Tehran have firmly reminded Ankara of its commitments and will not take any backsliding kindly if Turkey were to annex northeast Syria.

For several reasons Trump’s Syria “withdrawal” announced this week does not portend anything significant, other than a myopic PR gimmick which has ruffled a lot of silly feathers in Washington.

Tragically, however, his ham-fisted PR gimmick may result in a lot of innocent lives being lost owing to the green light he clumsily flashed to Turkey, thinking he was getting a “good deal” for boosting his voters.