HOME / WORLD / When it comes to N Korea, for all his talk of ‘red lines’, Trump’s a deal maker not a war maker, despite experts’ talk of endgames 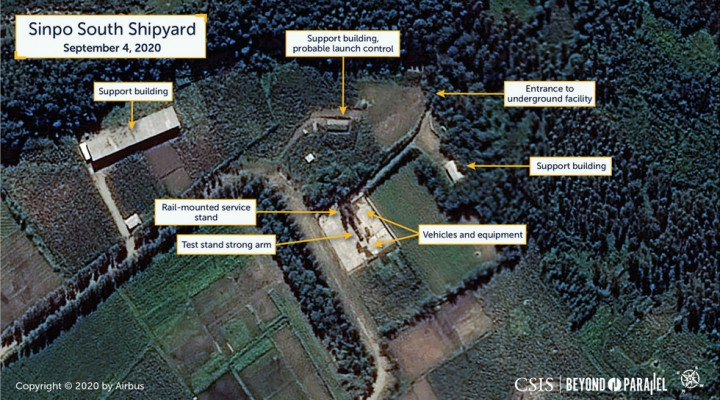 For President Trump, a possible test of a North Korean missile isn’t a threat to diplomacy, but evidence that, when it comes to US-North Korean relations, the diplomatic mold has been broken.

A prominent US think tank offers a prediction of a North Korean missile test and what it sees as a likely Trump reaction that would end US-North Korean talks on denuclearization. The test may happen, but a Trump overreaction is wishful thinking.

The Center for Strategic and International Security (CSIS), through its affiliated website, Beyond Parallel, has published an article by Victor Cha, a senior adviser, which details potential preparations underway in North Korea for a possible test launch of a submarine-launched ballistic missile.

A handout photo shows two ROMEO-class submarines (SS) anchored within the bay of the Mayang-do Submarine Base in Mayang-do, North Korea, September 4, 2020. CSIS/ BEYOND PARALLEL/AIRBUS 2020/via REUTERS

Cha, who served as a Korean expert in the administration of President George W Bush, and participated in the so-called ‘six-party talks’ that sought to find a solution to the problem of North Korea’s nuclear weapons program, is a well-regarded expert on Korea who was briefly considered by President Trump to be the US Ambassador to South Korea. His candidacy was ultimately set aside due to policy differences with Trump over the president’s “fire and fury” threats of military action against North Korea in response to its nuclear weapon and long-range ballistic missile programs.

Cha’s article, co-written with a fellow CSIS expert, Joseph Bermudez, provides rich detail underscoring a conclusion that North Korea is preparing to flight test a submarine-launched ballistic missile intended to serve as an ‘October surprise’ in time to disrupt the 2020 US Presidential election in November. With the US-North Korean denuclearization talks stalled, and President Trump facing a strong challenge in his bid for reelection from Democratic nominee Joe Biden, the notion that Pyongyang would seek to send the signal – to both candidates, without regard to who might win – that North Korea will still be there, stronger than ever, is not misplaced.

Victor Cha is a pragmatist when it comes to North Korea and the difficulties attached to the pursuit of realistic diplomacy, especially when it comes to finding a resolution to the issue of North Korea’s nuclear weapons program. Cha views the stalled diplomacy between the Trump administration and North Korea – mediated at times by a progressive South Korean government – as little more than “a half-measure that won’t fundamentally alter the military balance and will not be accompanied by a final dismantlement of North Korea’s nuclear weapons threat.”

The problem, according to Cha, is not that this diplomatic track is doomed to fail, but that it might succeed. North Korea has been playing Trump all along, exploiting his inexperience and inherent antipathy to complex and expensive military alliances. “Trump is the perfect mark,” Cha noted in a recent podcast. “Loves the show, doesn’t care about substance, and hates the alliance.” The three rounds of talks – Singapore, Hanoi and the DMZ – have not furthered denuclearization, but rather served to box the Trump administration into a corner.

The “big choice that’s coming down,” Cha believes, is that the longer the denuclearization talks drag on, the more advanced North Korea’s nuclear program becomes. Soon, the US will be confronted by the fact that the best nuclear agreement it will be able to reach is one where it tacitly accepts North Korea as a nuclear power along the lines of India and Pakistan, in exchange for limits – such as a ban on missiles possessing a range capable of hitting US territory – and some sort of verification regime to monitor a nuclear weapons stockpile that has been legitimized, not denuclearized.

Cha’s assessment of the likely trajectory of US-North Korean diplomacy under a Trump administration is not unrealistic. The problem is his analysis regarding Trump’s red lines – mainly the conclusion that the test of a sea-launched ballistic missile “would definitely cross all of President Trump’s red lines,” noting that “it would be difficult for President Trump to ignore this.”

Cha has been wrong about Trump before – namely, in failing to recognize Trump’s 2017 rhetoric of “fire and fury” as little more than theatrical posturing, rather than serious intent. In Cha’s defense, most of the world fell for Trump’s ploy, including the North Koreans, who launched their “Olympic diplomacy” initiative that ended up breaking the ice between the two nations largely as a means of de-escalation. Being wrong once does not invalidate Cha as an insightful analyst – far from it. But the Cha predicate that the Trump-North Korean nuclear diplomacy was grounded in a need to forestall a war between the two nations misses a critical point: there never was going to be a war, at least not intentionally.

Trump has shown a predilection for avoiding decisive military conflict, whether against Iran, Syria, Iraq, Afghanistan – or North Korea. The threat of force is little more than a smokescreen for policies designed to remove US military forces from the equation, rather than escalate militarily. Trump’s modus operandi, for better or worse, is that of a deal maker, not a war maker. He has blurred so-called “red lines” in the past, foregoing long-held norms for a fresh approach that many long-time establishment figures, such as Victor Cha, find disconcerting.

Where Victor Cha gets it wrong in his most recent analysis is not that North Korea is preparing for a test of a submarine launched ballistic missile – everything points to this possibility. The flaw in Cha’s assessment is the notion that Trump has a red line that isn’t attached to long-range missiles that would cause him to throw away the tremendous amount of personal and political capital that has already been invested in the North Korean diplomatic gambit.

Victor Cha and the CSIS have committed to a line of thinking which holds that the Trump diplomatic interaction with North Korea is fundamentally flawed and will lead to solutions that are less than optimal, even dangerous. This approach, however, is tethered to previous policies and beliefs, dating back to the Clinton presidency. These policies, which Cha himself endorsed while working for the Bush 43 administration, repeatedly failed to achieve a resolution to the crisis on the Korean peninsula. The main reason for this failure was that the US wasn’t open to a comprehensive rethink about what an acceptable endgame policy would look like, inclusive of the possibility of a nuclear North Korea functioning as a responsible member of the international community.

While the Trump administration has not committed to such an outcome (indeed, the president has repeatedly articulated against this possibility), what is clear is that Trump, for better or for worse, has broken that mold when it comes to diplomatic interaction with North Korea. US-North Korean relations are no longer tethered to the failed policies of the past, but rather free to find their natural state. And this will hold true regardless of who sits in the White House.

0 thoughts on “When it comes to N Korea, for all his talk of ‘red lines’, Trump’s a deal maker not a war maker, despite experts’ talk of endgames”