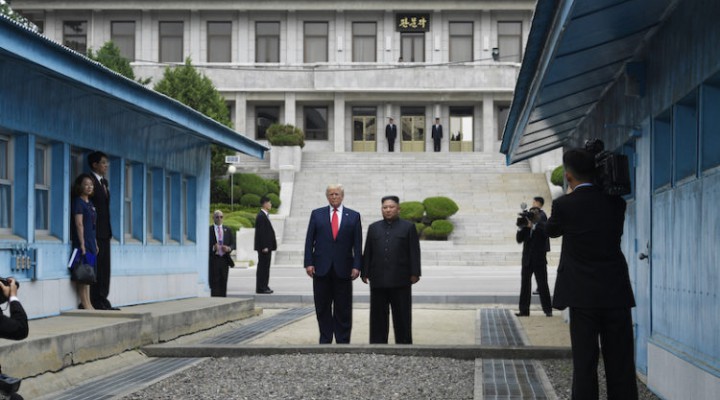 On July 11, 2019, the U.S. Special Representative for North Korea, Stephen Biegun, will meet in Berlin with Lee Do-hoon, South Korea’s special representative on peace and security, and other representatives from the European Union to “advance our shared efforts to achieve the final, fully verified denuclearization of North Korea” according to a State Department press release.

The Berlin meeting, which will occur in advance of the anticipated resumption of direct talks between the U.S. and North Korea later this month, represents an important preliminary step forward in rebuilding consensus on denuclearization. It follows the collapse of a round of talks in Hanoi during the February 2019 summit between U.S. President Donald Trump and North Korean Premier Kim Jong Un.

The Hanoi talks faltered over North Korean objections to the U.S.’s hardline position regarding the pace of denuclearization, and the U.S.’s refusal to consider easing sanctions linked to North Korea’s nuclear program prior to the complete, verified elimination of the North’s nuclear weapons program. North Korea accused the U.S. of negotiating in bad faith and put President Trump on notice that it would no longer work with Secretary of State Mike Pompeo or national security adviser John Bolton. Moreover, it gave the U.S. until the end of the year to resolve the composition of its negotiating team and the substance of its negotiating position.

On June 30, President Trump conducted an impromptu meeting with Kim Jong Un along the border between North and South Korea, greeting him with a smile and a handshake before crossing over to the North Korean side—a symbolic first by a sitting U.S. president. He and Kim then retired to a building inside the demilitarized zone between North and South Korea for a 50-minute private talk. While the substance of their talk remains unknown, President Trump hinted at its gist in a press conference afterward, where he appointed Biegun as the new U.S. chief negotiator for denuclearization talks, thereby acceding to the demands of North Korea regarding Pompeo and Bolton.

While many critics of President Trump’s dealings vis-a-vis North Korea’s nuclear weapons have condemned him for giving away too much for too little, the reality is that Donald Trump, whether by luck or design, has done more to advance the cause of peace and stability on the Korean Peninsula than any president before him.

Much of what he has done to date has been little more than symbolic in nature. Take his decision to cross into North Korea. It was a walk of only 20-odd steps, not far as distances go. But in terms of its potential impact on international peace and security, that short stroll may represent the most important arms control-related journey since Paul Nitze and Yuli Kvitsinsky took their famous “walk in the woods” in Geneva in 1982 in an effort to break the impasse that had stymied negotiations over intermediate nuclear force (INF) reductions.

While the immediate impact of the Nitze-Kvitsinsky saunter was nil—negotiations eventually broke down in the aftermath of the shooting down of Korean Air Lines Flight 007 in September 1983—the spirit of compromise the “walk in the woods” embraced carried forward, eventually leading to the signing of the INF Treaty in December 1987 that pledged to eliminate all U.S. and Soviet intermediate-range nuclear missiles. While the irony of being seen as following in the footsteps of Paul Nitze would probably escape President Trump, given the latter’s role in killing that landmark arms control treaty, the spirit of Geneva circa 1982 was very much alive as the U.S., and North Korean leaders tried to breathe new life into denuclearization talks that had been frozen in the aftermath of the failed summit in Hanoi.

The Trump-Kim “Stroll Across the Border” not only advanced the prospects of an eventual U.S.-North Korean agreement on denuclearization, but the symbolism of the moment helped heal decades of disrespect of North Korea at the hands of the U.S. that had poisoned the prospects for peace. Not many Americans are familiar with Paragraph 13(d) of the 1953 armistice agreement signed by the U.S., along with the U.N.-led coalition and North Korea, that led to the suspension (not termination) of hostilities at the conclusion of the Korean War. Technically, North and South Korea remain in a state of war to this day.

The armistice created the Neutral Nations Supervisory Commission (NNSC) to conduct inspections on both sides of the military demarcation line. One of the NNSC’s principle tasks was to ensure that no new weapons systems were introduced into the Korean peninsula by either side, as spelled out in Paragraph 13(d). President Eisenhower opted in 1956, under pressure from Congress, to cut military spending and to reduce the number of troops stationed in South Korea and station nuclear weapons there instead. In June 1957 the U.S. unilaterally announced it was no longer bound by Paragraph 13(d), and by January 1958 began deploying nuclear weapons onto South Korean territory. Given that the stated objective of the U.S. at the time was to delegitimize and destabilize the North Korean government, that country could only interpret the U.S.’s actions as an existential threat.

While North Korea complied with its obligations, the U.S. did not. In 2002, President George W. Bush first violated the Agreed Framework by implementing a policy of nuclear preemption against North Korea; he later halted the delivery of fuel oil required under the Agreed Framework. North Korea retaliated by withdrawing from the Nonproliferation Treaty, setting in motion events that led to its testing of nuclear weapons and the eventual fielding of long-range ballistic missiles capable of delivering a nuclear warhead.

The history of the North Korean nuclear weapons program is long but not that convoluted. Its genesis stemmed from the United States violating the terms of the armistice and deploying nuclear weapons onto the Korean peninsula; its expansion can be attributed  to a combination of bad-faith negotiations on the part of the U.S.—which never abided by the terms of any agreement it reached with North Korea—and the underlying reality that the U.S. has been actively seeking the demise of the North Korean government since the cessation of hostilities in 1953. The 20 steps just taken by President Trump onto the soil of North Korea represented the most respect a leader of the United States has ever shown North Korea in the tumultuous history of relations between these two nations.

The “Stroll Across the Border” may not result in any immediate breakthrough in negotiations regarding denuclearization. But the spirit of respect and cooperation it engendered may well prove to be the spark needed to ignite a process that will lead to a lasting peace on a Korean peninsula freed from the terror of nuclear annihilation.

20 Steps in the Right Direction

The Fate of Trump’s Korean Gambit

0 thoughts on “Twenty Steps in the Right Direction”