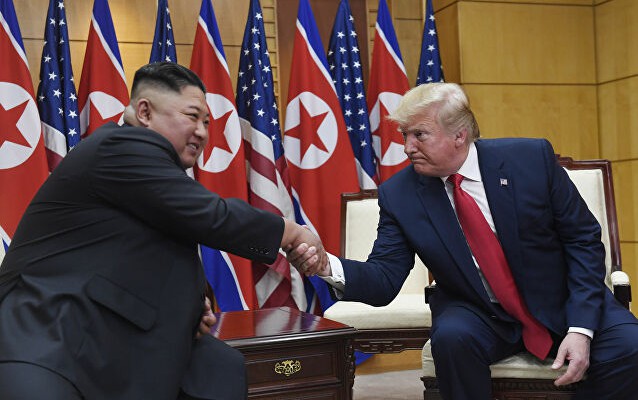 The breakdown in high-level talks between the US and North Korea last weekend shows that diplomacy between the two foes is at a critical juncture.

For negotiations to progress towards the denuclearisation of the Korean Peninsula, then the Trump administration must go beyond feel-good optics and offer Pyongyang substantial concessions.

Those concessions include lifting off wide-ranging economic sanctions imposed on the Democratic People’s Republic of Korea (DPRK), as well as Washington providing security guarantees. Declaring an official end to the Korean War (1950-53) would be a long overdue demonstration of peace and security commitment by the US.

Russia and China have been consistently urging dialogue between Washington and Pyongyang to resolve the decades-old military stand-off, one of the most dangerous flash-points plaguing international security. When US President Donald Trump and North Korean leader Kim Jong-un surprised everybody by holding a landmark meeting last June in Singapore it seemed like a diplomatic breakthrough. It was the first time an American president had met a North Korea leader.

Trump certainly deserves credit for abandoning bellicose rhetoric he had previously used against North Korea and for reaching out diplomatically. However, as Russia and China have both advocated, the US side needs to offer sanctions relief to Pyongyang if it is to build confidence for a wider-ranging peace settlement.

When Trump held a follow-up summit with Kim in Hanoi in February this year, the talks collapsed because the US was reportedly not willing to provide the sanctions relief demanded by Pyongyang in return for reciprocal steps by the latter towards decommissioning its nuclear arsenal. Trump had a third brief meeting with Kim in June – one year after their breakthrough Singapore summit. The last meeting was on the North Korean side of the Demilitarized Zone. It was another history-making event, the first time a sitting US president set foot on North Korean soil.

Personal relations between Trump and Kim appear to have remained strong despite the lack of progress in talks and despite North Korea resuming short and medium-range missile tests. Just last week, it tested a submarine-launched ballistic missile, a reminder that if talks were to fail then the situation could quickly regress to the former tense military stand-off.

The breakdown in talks last weekend in Sweden suggests that the Trump administration has not moved beyond the mode of public relations and flashy summitry.

The two sides met near the Swedish capital Stockholm in what was billed as the first high-level meeting since the stalemate of Hanoi seven months before. Stephen Biegun, appointed by Trump as special envoy, led the US side.

However, after more than eight hours of discussions the summit broke up in acrimony, as expressed vehemently by the North Korean side. Chief negotiator Kim Myong Gil denounced the American counterparts for not offering anything substantive and of displaying an old attitude of hostility, whereby all concessions are expected to be made by North Korea. In short, he deplored the lack of reciprocity from the US.

“The negotiations have not fulfilled our expectations and finally broke up… without any outcome. It is totally due to the fact that the US would not give up their old… [hostile] attitude”, Kim Myong Gil told reporters in Stockholm.

By contrast, the US side portrayed the talks as positive and productive. The Americans even said they expected a further summit in two weeks time, also in Stockholm.

State Department spokeswoman Morgan Ortagus said in a statement that “the early comments from the DPRK delegation do not reflect the content or the spirit of today’s eight-and-a-half-hour discussion. The US brought creative ideas and had good discussions with its DPRK counterparts,” she insisted.

As if to demolish the positive spin put out by Washington, a subsequent statement by the North Korean foreign ministry was even more vociferous: “We have no intention to hold such sickening negotiations as what happened this time before the US takes a substantial step to make complete and irreversible withdrawal of the hostile policy toward the DPRK”. The statement went on say that the Stockholm talks “made us think they have no political will to improve relations and may be abusing the bilateral relations for their own partisan interests”, the latter referring apparently to American presidential electioneering.

This is where the rubber hits the road, so to speak. Granted, Trump has, commendably, overcome belligerent stereotyping and shown a courageous innovative outreach to North Korea. But Trump can’t sustain diplomacy by superficial imagery based solely on historic handshakes and headline-making public relations. Somewhere along the line, there must be substantive offers and real concessions if progress is to be made. And of course, if engagement is genuine, there must be a spirit of mutuality and reciprocation, not a zero-sum attitude of one-sided concessions. Surely, the Americans must know that North Korea is not going to capitulate after 76 years of defiance.

If Donald Trump wants to boost his re-election chances in 2020, then he has to stop the grandstanding politics with North Korea and actually get down to the nitty-gritty of peace negotiations. The ball is in his court. If he pulls off a deal with Kim Jung Un, it could be a decisive voter-winner. But any deal must be based on substance.

Following the Stockholm debacle, the US State Department stated: “The United States and the DPRK will not overcome a legacy of 70 years of war and hostility on the Korean Peninsula through the course of a single Saturday”.

Yes, that’s a fair point. But what about the next point claimed by the State Department. “These are weighty issues, and they require a strong commitment by both countries. The United States has that commitment”.

If the US has indeed “that commitment”, to make peace on the Korean Peninsula, then it should show it by ending its sanctions blockade of North Korea and by officially declaring that the war is over.