HOME / WORLD / Why Trump is Winding Up Tensions with North Korea 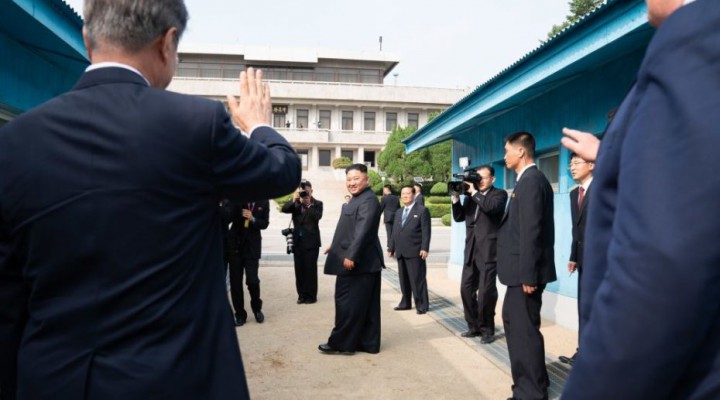 After 18 months of on-off diplomacy with North Korea, the Trump administration seems determined to jettison the fragile talk about peace, reverting to its earlier campaign of “maximum pressure” and hostility.

After 18 months of on-off diplomacy with North Korea, the Trump administration seems determined now to jettison the fragile talk about peace, reverting to its earlier campaign of “maximum pressure” and hostility. It’s a retrograde move risking a disastrous war.

In a visit to China this week, South Korean President Moon Jae-in and Chinese leader Xi Jinping both urged for greater momentum in the diplomatic process with North Korea, saying that renewed tensions benefit no-one. The two leaders may need to revise that assertion. Tensions greatly benefit someone – Washington.

Why Trump is winding up tensions again with Pyongyang appears to involve a two-fold calculation. It gives Washington greater leverage to extort more money from South Korea for the presence of US military forces on its territory; secondly, the Trump administration can use the tensions as cover for increasing its regional forces aimed at confronting China.

In recent weeks, the rhetoric has deteriorated sharply between Washington and Pyongyang. The Democratic People’s Republic of Korea (DPRK) has resumed references to Trump being a senile “dotard”, while the US president earlier this month at the NATO summit near London dusted off his old disparaging name for Kim Jong-un, the North Korean leader, calling him “rocket man”.

On December 7 and 15, North Korea tested rocket engines at its Sohae satellite launching site which are believed to be preparation for the imminent test-firing of an intercontinental ballistic missile (ICBM). North Korea unilaterally halted ICBM test-launches in April 2018 as a gesture for diplomacy with the US. Its last launch was on July 4, 2017, when Pyongyang mockingly called it a “gift” for America’s Independence Day.

On the engine testing, Trump said he was “watching closely” on what North Korea did next, warning that he was prepared to use military force against Pyongyang and that Kim Jong-un had “everything to lose”.

The turning away from diplomacy may seem odd. Trump first met Kim in June 2018 in Singapore at a breakthrough summit, the first time a sitting US president met with a North Korean leader. There were two more summits, in Hanoi in February 2019, and at the Demilitarized Zone on the Korean border in June 2019. The latter occasion was a splendid photo-opportunity for Trump, being the first American president to have stepped on North Korean soil.

During this diplomatic embrace, Trump has lavished Kim with praise and thanked him for “beautiful letters”. Back in September 2017 when hostile rhetoric was flying both ways, Trump told the UN general assembly he would “totally destroy” North Korea if it threatened the US. How fickle are the ways of Trump.

What’s happened is the initial promises of engagement have gone nowhere, indicating the superficiality of Trump’s diplomacy. It seems clear now that the US president was only interested in public relations gimmickry, boasting to the American public that he had reined in North Korea’s nuclear activities.

When Trump met Kim for the third time in June 2019, they reportedly vowed to resume negotiations on denuclearization of the Korean Peninsula. North Korea had up until recently stuck to its commitment to halt ICBM testing. However, for that, Pyongyang expected reciprocation from the US side on the issue of sanctions relief, at least a partial lifting of sanctions. Kim gave Trump a deadline by the end of this year to make some concession on sanctions.

Russia and China last week proposed an easing of UN sanctions on North Korea. But Washington rebuffed that proposal, categorically saying it was a “premature” move, and that North Korea must first make irreversible steps towards complete decommissioning of its nuclear arsenal. The high-handed attitude is hardly conducive to progress.

The lack of diplomatic reciprocation from Washington over the past six months has led Pyongyang to angrily repudiate further talks. It has hit out at what it calls Trump’s renewed demeaning name-calling of Kim. There is also a palpable sense of frustration on North Korea’s part for having been used as a prop for Trump’s electioneering.

The fact that Washington has adopted an intransigent position with regard to sanctions would indicate that it never was serious about pursuing meaningful diplomacy with Pyongyang.

Admittedly, Trump did cancel large-scale US war games conducted with South Korea as a gesture towards North Korea, which views these exercises as provocative rehearsals for war. This was an easy concession to make by Trump who no doubt primarily saw the cessation of military drills as a cost-cutting opportunity for the US.

Significantly, this month US special forces along with South Korean counterparts conducted a “decapitation” exercise in which they simulated a commando raid to capture a foreign target. Furthermore, the operation was given unusual public media attention.

As the Yonhap news agency reported: “A YouTube video by the Defense Flash News shows more details of the operation, with service personnel throwing a smoke bomb, raiding an office inside the building, shooting at enemy soldiers over the course, and a fighter jet flying over the building… It is unusual for the US military to make public such materials… according to officials.”

The Trump administration appears to have run out of further use for the diplomatic track with North Korea. The PR value has been milked. The policy shift is now back to hostility. The instability that generates is beneficial for Washington in two ways.

Trump is currently trying to get South Korea to boost its financial contribution towards maintaining US forces on its territory. Trump wants Seoul to cough up an eye-watering five-fold increase in payments “for US protection” to an annual $5 billion bill. South Korea is understandably reluctant to fork out such a massive whack from its fiscal budget. Talks on the matter are stalemated, but expected to resume in January.

If US relations with North Korea were progressing through diplomacy then the lowered tensions on the peninsula would obviously not benefit Washington’s demand on South Korea for more “protection money”. Therefore, it pays Washington to ramp up the hostilities and the dangers of war as a lever for emptying Seoul’s coffers.

The other bigger strategic issue shaping US intentions with North Korea is of course Washington’s longer-term collision course with China. US officials and defense planning documents have repeatedly targeted China as the main geopolitical adversary. American forces in South Korea comprising 28,500 troops, nuclear-capable bombers, warships and its anti-missile Terminal High Altitude Area Defense (THAAD) system are not about protecting South Korea from North Korea. They are really about encircling China (and Russia). Washington hardly wants to scale back its military assets on the Korea Peninsula. It is driven by the strategic desire to expand them.

In media comments earlier this month, Pentagon chief Mark Esper made a curious slip-up when referring to withdrawing US troops from Afghanistan. He said they would be redeployed in Asia to confront China.

Esper said: “I would like to go down to a lower number [in Afghanistan] because I want to either bring those troops home, so they can refit and retrain for other missions or/and be redeployed to the Indo-Pacific to face off our greatest challenge in terms of the great power competition that’s vis-a-vis China.”

The logic of war profits and strategic conflict with China mean that Trump and the Washington establishment do not want to find a peaceful resolution with North Korea. Hence a return to the hostile wind-up of tensions.

The Fate of Trump’s Korean Gambit