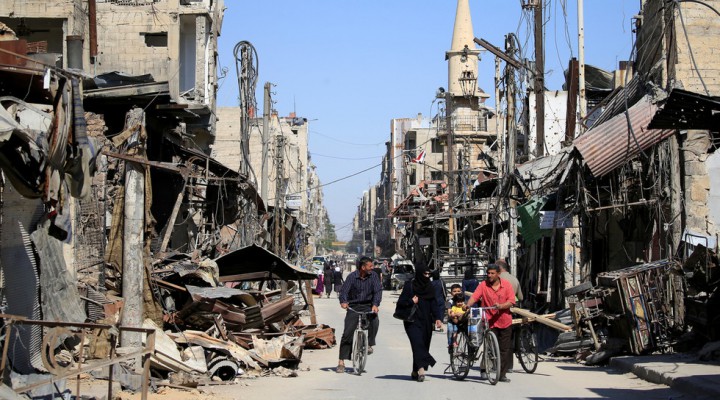 NATO states responded with an unjustified certainty to the Douma incident two years ago, and have compounded the shame with their treatment of weapons expert Ian Henderson this week at the UN.

At an ‘Arria-formula’ meeting of the Security Council convened on January 20, 2020  at the request of Russia, Ian Henderson – a former member of the Organization for the Prohibition of Chemical Weapons (OPCW) – gave testimony which contradicted, or otherwise brought into question, the conclusions of the OPCW detailed in its official report on the use of chemical weapons in the Damascus suburb of Douma on April 4, 2018.

The details provided by Henderson were technical in nature, addressing various scientific and bureaucratic shortcomings within the OPCW regarding the collection, assessment and presentation of information relating to the Douma incident.

Henderson noted that he and his fellow inspectors “had serious misgivings that a chemical attack had occurred” at Douma, but that these concerns were overridden by OPCW management amid pressure from the US and UK to sustain the original allegations.

Henderson’s presentation was fiercely opposed by representatives of both the United Kingdom and the United States. An examination of the relevant details regarding the Douma incident and Henderson’s findings clearly shows the reason for this recalcitrance — both nations had attacked Syria, in violation of international law, on the premise that there had been a chemical weapons attack on Douma. They then sought to bully the OPCW into covering for this illegal action by issuing an official report on the Douma incident which falsely claimed evidence of chemical weapons use was, in fact, detected by inspectors.

Henderson, a member of the OPCW team that had conducted the investigation into the Douma incident, provided testimony that contradicted these findings, and in doing so exposed the US-led military attack on Syria as being without justification.

Henderson’s testimony was conducted using a process known as the ‘Arria formula’. Under longstanding UN Security Council practice, only delegations, high government officials from Council members and United Nations officials could address regular Security Council meetings and consultations. In 1992, during the crisis in Yugoslavia, Venezuela sat on the Security Council.

Its ambassador, Diego Arria, interviewed a priest whose testimony Arria believed was of interest to the larger body. Unable to invite the priest to speak before the Council in chambers, Arria instead invited the other members to the delegates lounge, where the priest was able to provide informal testimony.

Thus was born the Arria formula, a process by which a member of the Council is able to invite other Council members to an informal meeting, held outside of the Council chambers and chaired by the inviting member. Arria-formula meetings are normally convened for the purpose of a briefing given by one or more experts regarding a matter of current concern for the Council.

Henderson was invited by Russia to provide testimony to the Security Council under this mechanism. He was supposed to testify in person, as had been the practice during previous such hearings on Syria organized by the United States.

Karen Pierce, the UK ambassador to the UN, lambasted Henderson’s presentation as evidence of the “Russians trying to deny facts that have been established by an independent body [the OPCW], trusted by the international community to do its work”, while her US counterpart, Cherith Norman Chalet, dismissed Henderson as “Russian disinformation.”

While Russia may have convened the hearing, the information provided by Henderson was sourced to the OPCW itself, consisting of his first-hand observations and work as somebody who participated in the Douma investigation and report preparation.

Moreover, Henderson’s testimony was bolstered by documents released by WikiLeaks which back up his central allegation that there was no evidence discovered to support the contention that chemical weapons had been used at Douma, and that the fact-based conclusions of the inspection team had been changed by OPCW management, following pressure from the US and UK.

Henderson has done the world a service in exposing the dangerous duplicity of the US, UK and France when it comes to the issue of Douma and allegations of chemical weapons use by the Syrian government.

The information he provided clearly shows that the OPCW, by violating its own stringent standards for independent science-based work, has allowed itself to become little more than a politicized tool, working on behalf of US, UK and France policy objectives instead of international peace and security.

His testimony is also an indictment of the three countries, who have exploited their respective positions within the OPCW to undermine the credibility of that organization in a bid to cover up the fact that they carried out a military attack on a sovereign state without any justification, and in violation of international law.