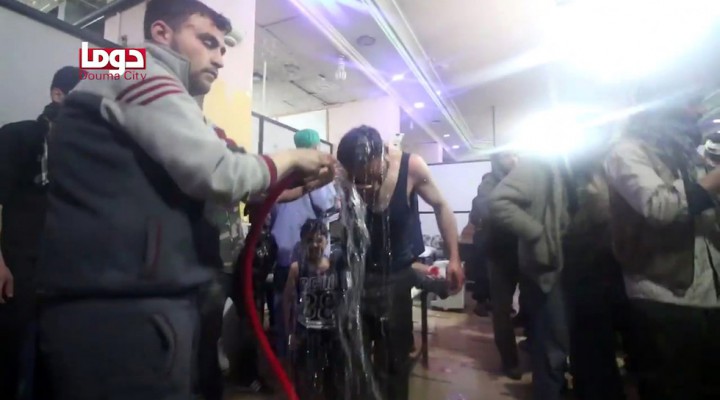 In the light of the increasing exposure of the OPCW as a deeply compromised instrument of power for the US-led global alliance, the role of aligned media in protecting discredited constructs must be examined.

On January 20, a quiet, unassuming expert laid bare the OPCW suppression of evidence that would demonstrate the illegitimacy of the bombing of Syria in April 2018 by the UK, US, and France. Ian Henderson is a former OPCW inspection team leader and an engineering and ballistics specialist. Henderson said he visited Douma with the first OPCW inspection team shortly after the alleged chemical attack on April 7, 2018. In an address to the UN Security Council Arria-Formula Meeting, Henderson presented his misgivings and spoke of the OPCW management information lockdown.

Henderson’s analysis of the events, in particular the “chlorine cylinder dropped by Syrian air-force helicopters” narrative was inexplicably suppressed by the OPCW and omitted from the final report which fraudulently maintained the “likely” verdict that chlorine had been used.

Henderson’s report had supported the conclusion that there had been no chemical attack. A number of other OPCW colleagues have also come forward with similar claims that their expert opinions were censored by the OPCW who appear to have been tasked with retrospectively justifying the US allied criminal aggression against Syria. A bombing campaign that resulted in the destruction of a laboratory complex and cancer research center, located in Barzeh on the outskirts of Damascus.

It is worth noting that had this been a “chemical weapons” factory as claimed by Western intelligence, the potential for civilian deaths would have been horrific in the event of “chemicals” being released into the atmosphere close to Damascus residents.

The Douma scandal has the hallmarks of the Iraq WMD fabrication and the rush to judgement by the state media PR agencies and was a horrifying potential prelude to a world war with the US and Russia confronting each other on Syrian territory.

History demonstrated that the invasion of Iraq was based on the fiction that WMDs existed. We witnessed a media circus vindication of the bloody conquest of Iraq without hesitation or investigation. Not only did the Western media endorse the wholesale slaughter of the Iraqi people, they were seen to celebrate the American/UK show of military might and to applaud the campaign of devastating “shock and awe.”

Two days after the Douma staged event was produced by none other than the terrorist-linked UK/US sponsored White Helmets, who have been primary “witnesses” and players in the majority of alleged chemical weapon attacks used to vilify Syria and Russia, the Guardian’s Simon Tisdall went on the warpath against Syria. “After Douma, the West’s response to Syria’s regime must be military,” Tisdall informed us.

This rush to judgement was mirrored almost universally by media in the West; those who dared to challenge the dominant narrative or to advocate caution were dismissed and smeared as “conspiracy theorists” or worse “Orwellian genocide deniers.”

Before the OPCW inspection teams had achieved access to Douma, the mockingbird media was engineering the removal of doubt from public consensus. The Syrian government, according to Western media, had “undeniably gassed its own people” just as the Syrian Arab Army was advancing to victory in the mass-murdering Jaish Al Islam-occupied district of east Damascus.

Syria has endured nine years of bloodshed thanks to a war which is being imposed upon its people by the US Coalition. The “chemical weapon” narrative is providing a pretext for unlawful proxy aggression against a sovereign nation and the media is wholeheartedly promoting this narrative despite the glaring evidence that exposes it as another WMD “dodgy dossier.”

The BBC, as with Iraq, has been at the forefront of this vilify-Syria propaganda campaign and is the UK government’s disinformation flagship promoting the savagery of illegal wars worldwide. When the OPCW interim report was released in July 2018, the BBC appeared to deliberately misrepresent the report’s findings to shore up the UK Foreign Office’s illegitimate claims of chemical weapon use by the Syrian government.

Remember BBC head of newsgathering, Fran Unsworth, who claimed they went along with #Iraq WMD because no access to Iraq..but 4 years before invasion, Scott Ritter categorically said “If I had to quantify Iraq’s threat in terms of WMD, the real threat is zero, none”. Familiar?

In legendary journalist, John Pilger’s film “The War You Don’t See,” the BBC’s head of newsgathering, Fran Unsworth, claims that the media was “taken in” regarding Iraq, and hoodwinked by government claims. Unsworth blames the BBC’s insouciance on having “no access” to information or to Iraq. But the crucial expert analysis that Iraq’s WMD did not exist was available four years prior to the US invasion, from the chief UN weapons inspector in Iraq, Scott Ritter. In 1998, Ritter told John Pilger: “If I had to quantify Iraq’s threat in terms of WMD, the real threat is zero, none.”

The BBC ignored this game-changing evidence, just as they have gone out of their way to ignore the collapsing Douma “chemical weapon” narrative and the exposure of the OPCW as an extension of the UK/US globalist mafia cartel.

When I challenged Lyse Doucet, BBC international correspondent and Syria “expert,” about the BBC’s lack of coverage of the Douma/OPCW scandal, Doucet disingenuously blamed BBC silence on an alleged lack of access to Syria. The OPCW is based at the Hague but this minor detail was swept under the carpet.

Hi @bbclysedoucet I have just left Media Ministry #Damascus, they told me you hve not applied for a visa since March 2019. Makes yr inference "no visas" so no investigation of #OPCW corruption, a little disingenuous. When will #BBC finally investigate #Syria "dodgy dossier"?

Why are the anti-war voices of reason not heard? Because the BBC and other state-aligned media outlets exist to protect power from truth and to dupe the people into believing war is necessary. The BBC and the corporate media complex has rarely held any state narrative up for scrutiny, except after the event when the dust has settled on the devastating consequences of their complicity. Suspended skepticism is responsible for the devastation and bloodshed that are the consequences of these wars, waged on criminally false pretexts.

These journalists do not simply “go along” with disinformation, they jingoistically cheer for the destruction of nations and peoples that they know virtually nothing about.

Journalists who capitulate wittingly to state foreign policy agendas and the associated official narratives manufactured to ease the passage of those agendas, are nothing more than accomplices, in breach of international law.

The UK, France and the US have stone-walled the emerging engineering and scientific reports produced by serious experts in their field, members of the FFM (Fact Finding Mission) team. Instead, NATO-aligned & sponsored blogs like Bellingcat have been instructed to counter the mounting evidence of the OPCW dereliction of duty while compromised media ensure the public is kept in the dark about the shifting narrative landscape.

This is a brazen disinformation campaign.

If it transpires that the Douma OPCW report was a fabrication, it should lead to the questioning of earlier episodes, like Khan Sheikhoun in 2017, which also led to Trump showering Syria with cruise missiles.

This will mean the media will be put under further pressure to explain their blanket approval and sensationalist amplification of now discredited narratives which sustained a war which should never have been allowed to begin.

Displays of post-war remorse and claims that the media was subjected to a sophisticated disinformation campaign that may have provided absolution of guilt for the invasion of Iraq should not be allowed to protect the war-media from accountability for the suffering of the Syrian people and the blood that is on their hands.