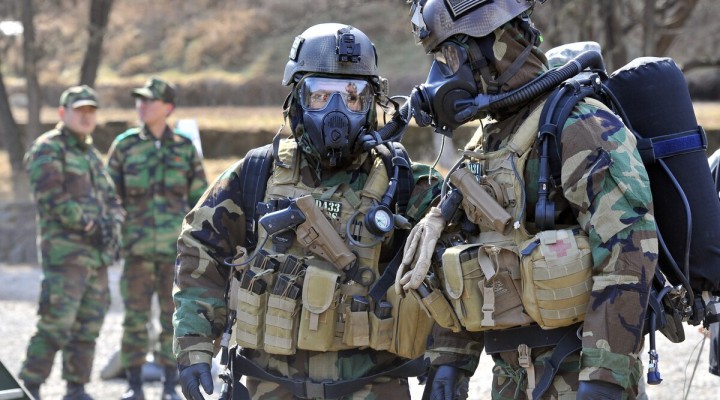 Initially, Iranian and Chinese officials declared that the coronavirus was a biological weapon created in US military laboratories. The US media was quick to accuse those behind the statements of spreading conspiracy theories, but proponents of the theory began speculating further – was the leak random or was every action deliberate?

Within the context of something like hybrid warfare (on the one hand, a fairly specific concept of conducting military operations and achieving political objectives and, on the other, a big term that has been used as a kind of filler in recent years), the coronavirus has been associated with a strategy aimed at undermining the economic growth of both China and other countries. Even the pandemic within the US has been interpreted by conspiracy theorists as a plot by transnational capital against Donald Trump on the eve of the presidential election.

Putting such speculation aside, the outbreak of the pandemic can still be regarded as warfare, but the term needs to be approached rationally. The measures adopted to combat the pandemic in China look completely logical and adequate – the first question asked was not who is to blame, but what should be done. It is no coincidence that accusations of US military involvement only surfaced after the crisis had passed and the incidence and mortality rates had started to fall.

Since the system for monitoring citizens in the People’s Republic of China is well developed and the Confucian mindset of obeying the authorities helped to identify those infected and create the right conditions for isolation, it was possible to localise the spread relatively quickly, which is more than can be said for Iran and some European countries. Besides the different mentalities of nations, aspects like solidarity and a willingness to help (or their absence) were revealed to the world. All of these factors are crucial during crisis situations and military conflicts. So, there is good reason why viruses are compared with such threats, and, in a historical context, the fight against various epidemics and similar phenomena were figuratively referred to as a war – the war against hunger, the war against alcoholism, etc.

Since the current crisis is not typical, the comparison with a non-conventional form of warfare is completely justified. In this regard, a curious article entitled “Using hybrid-warfare defeat mechanisms to fight the coronavirus and counter future bioweapons. A novel approach” appeared on the website of a US publication that deals with specific conflicts such as small wars, terrorism and urban combat. The author of the article is a US Army Officer who has served in both Afghanistan and Iraq. On a scale of threats, he places the coronavirus between militias (on the left – closest to conventional conflicts) and guerillas (to the right – classified as non-conventional warfare). The difference between them is that the far left of the spectrum is characterised by accurate intelligence data and compliance with all rules of war, while on the right-hand side (the farthest right is terrorism), the quality of data is very low and the rules of war are not observed, making it significantly more difficult to get an understanding of the situation and carry out any actions. When it comes to infectious diseases, and in the specific case of Covid-19, the greatest challenge is a well-functioning healthcare system and transport network.

If the virus itself is regarded as a hybrid threat, then its characteristics need to be identified in order to then identify the means that will be used to combat this threat. Since the infection is carried and spread by people, an area for particular attention is the movement of people. The issue, therefore, is proper isolation and quarantine measures.

In military speak, defeating the enemy means conducting certain types of operations that can be combined. As a general rule, these are attrition (exhaustion), dislocation, and disintegration. Attrition means placing armed forces in more advantageous locations and at more advantageous times to destroy the enemy forces faster than they can recover. Applying this to the reality of a pandemic, it means measures to comply with quarantine conditions. And, first and foremost, it refers to a responsible approach, i.e. intentional self-isolation. If social self-isolation is just a reaction, then overwhelming isolation could be a proactive measure against the spread of a viral infection.

The second operation is dislocation, which seeks to rapidly change conditions so that the enemy cannot seize the initiative. If the coronavirus is the enemy, then it needs to be isolated into tiny clusters – i.e. by closing schools, nurseries, universities, museums, all public places generally, and also borders, and by restricting transportations networks. In parallel with this, testing should be carried out and additional medical assistance services should be set up. To avoid preventing freedom of assembly in connection with certain measures, special digitised public spaces should be created.

The third operation is disintegration. In war, this refers to the destructive effects of mass fire on targets. For a pandemic, it is vaccination. This is actually the most effective method, and it is also the simplest to implement. But what should be done if a vaccine doesn’t exist yet? Which measures have been used in warfare when there hasn’t been enough ammunition? It is a complex issue, but, at the same time, it should be resolved without delay. Either other means must be used that are capable of replacing firepower, or the required number of bombs and shells must be manufactured (bought/borrowed from a third party) as a matter of priority. It is significant that the World Health Organization and the United Nations have been unable to respond to the challenge of the pandemic. So, something is wrong with the blueprint for a world government and global governance. Sovereign decisions seem more effective, even if the experience is then applied on a global scale.

A different view on using military force against the pandemic was put forward by retired Navy Admiral and former NATO Supreme Allied Commander James Stavridis, who reacted to the pandemic with an article published on the Bloomberg website on 14 March. He praises the US military, of course, for their involvement in combating the spread of cholera in Haiti in 2010, and America’s role in preventing the spread of Ebola in West Africa. Significantly, however, he also pays tribute to the Chinese military, which quickly managed to set up a hospital in Wuhan. Stavridis urges us to take lessons from China and reform the Pentagon on the same principles – the US military should be able to quickly switch to civilian tasks, interdepartmental collaboration, and, especially, coordination with key organisations on the issue should be developed in detail and put into practice.

A comparison with conditions of war can also be considered from the position of a long-term strategy, namely, the subsequent conditions of peace. During the Second World War, the US tried to establish its own rules for the coming decades and increase its influence using the Marshall Plan, and now the Federal Reserve System is reducing the key rate and printing billions of extra dollars, which will only increase the level of risk from the collapse of the global mass of banknotes backed by absolutely nothing. These are similar to the old methods, but will they work under these new conditions?

0 thoughts on “The Coronavirus And Hybrid Warfare”