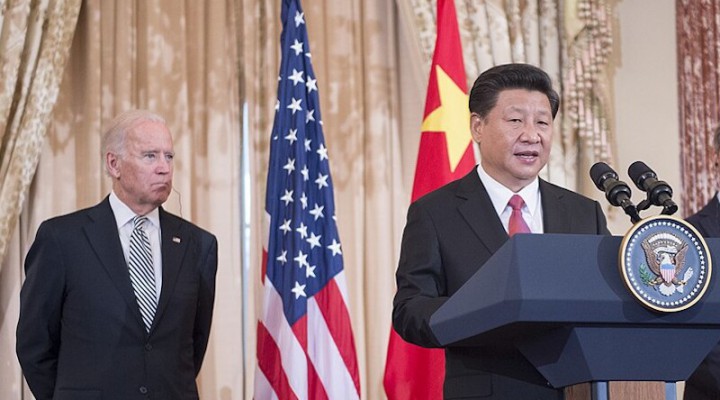 While the US seeks to distance China from Russia over the issue of Ukraine, the Chinese see Ukraine as a harbinger of things to come in the Pacific. By failing to communicate over the Ukraine issue, the US and China are inching closer to a direct military conflict over Taiwan.

On Mar. 18, US President Joe Biden and Chinese President Xi Jinping spoke via video link. The primary topic, according to a White House readout, was “Russia’s unprovoked invasion of Ukraine.” Biden reportedly outlined the view of the US and its allies that the best way to respond to the invasion is to impose costs on Russia. Biden, the White House stated, “described the implications and consequences if China provides material support to Russia.”

Biden’s threatening language echoed that of National Security Adviser Jake Sullivan at a Mar. 14 meeting with the Director of China’s Office of the Foreign Affairs Commission, Yang Jiechi, in Rome. While the White House’s succinct readout merely said the talks involved “substantial discussion of Russia’s war against Ukraine,” the meeting lasted some seven hours, implying a conversation of much greater complexity. State Department spokesperson Ned Price hinted at this to the press in Rome: “The national security adviser raised directly and very clearly our concerns about the [People’s Republic of China’s] support to Russia in the wake of the invasion, and the implications that any such support would have for the PRC’s relationships around the world.”

Biden and Sullivan’s concern reflected intelligence reports that China had received a request from Russia for military aid and had indicated a willingness to grant this request. Both Biden and Sullivan apparently emphasized to China that any such assistance would provoke US economic sanctions.

Every story has two sides. However, the Chinese version of the talks sounded like it was reporting on a completely different event. According to China’s official Xinhua News Agency, far from being a passive receptor of US angst, Yang controlled the tempo and tone of the Rome meeting, calling on the international community to “jointly support the Russia-Ukraine peace talks so that substantive results can be achieved as soon as possible,” and encouraging all parties to “exercise maximum restraint, protect civilians and prevent a large-scale humanitarian crisis.”

Yang also said the “historical context of the Ukraine issue” needs to be “straightened out.” He encouraged all parties to “get to the bottom of the problem’s origins” and respond to “the legitimate concerns of all the parties.”

This point was driven home by Chinese Foreign Minister Wang Yi. A few days after the Rome meeting, he stated that “China is not involved in the [Ukraine] crisis, and we do not wish to be affected by the sanctions.” China “has the right to defend its own interests,” Wang declared, adding “[t]he Ukrainian crisis is a result of the accumulation of Europe’s security conflicts.” Both Wang and Yang avoided labeling the Russian operation in Ukraine as either an invasion or war, stating that “While China encourages Russia and Ukraine to cease fire, we wish to see fair peace talks between Europe and Russia.”

Xi left even less doubt as to whom he held responsible for the Ukraine crisis. The Chinese readout of the Biden-Xi phone call said the Chinese leader told Biden that, while China wants peace in Ukraine, it strongly opposes US and European sanctions against Russia. The US and Nato sparked the conflict and should take responsibility for solving it: “He who tied the bell to the tiger must take it off,” Xi told Biden, using a Chinese aphorism. The US and Europe should “conduct dialogue with Russia to solve the crux of the Ukraine crisis and resolve the security concerns of both Russia and Ukraine.”

If Sullivan and Biden’s goal was to create a divide between China and Russia over Ukraine, they failed. The Biden administration often appears indifferent to Xi’s characterization of Sino-Russian ties as the “best in history,” with both nations “each other’s most trustworthy strategic partners.” The concept of Xi and Russian President Vladimir Putin having “built good working relations and a close personal friendship” seems foreign to both the US president and his national security adviser.

Xi and Putin in Beijing on Feb. 4 issued a 5,000-plus word joint statement detailing the substance of, and the common impetus behind, the Russian-Chinese partnership: It provides a vital counterforce to what they view as the unilateralist, aggressive global agenda of the US, which threatens not only their two nations, but the peace and security of the world.

The notion that China would be willing to desert Moscow over matters of critical national-security importance to Russia is all the more dubious given the emphasis China placed in the joint statement with Russia to its own national-security priority: the status of Taiwan. For Xi, there is an echo between how the US used Nato in Europe, and US efforts to rally regional support in the Pacific through quasi-alliances such as the “Quad” — comprised of the US, Japan, Australia and India — and the newer Aukus collaboration between Australia, the UK and US to confront China over its claims over both Taiwan and the South China Sea.

From the Chinese perspective, the same strangulation tactics used against Russia in Europe are being mirrored in the Pacific. There, the US and its allies have begun to aggressively challenge China militarily through freedom of navigation exercises in the Strait of Taiwan and South China Sea, and by the deployment of new advanced submarines, hypersonic missiles, and amphibious forces specifically acquired and configured for a military confrontation with China.

Biden repeatedly informed Xi during their call that the US is not seeking to have a new Cold War or conflict with China, alter its system of government, revitalize alliances against China, or support Taiwan independence. However, in his very first press conference as president, back in March 2021, Biden took an aggressive tone on China. “They [China] have an overall goal to become the leading country in the world, the wealthiest country in the world, and the most powerful country in the world. That’s not going to happen on my watch.”

Biden criticized the Chinese system of government as “autocratic” and held a global “Summit for Democracy,” where he actively promoted American-style democracy over Chinese autocracy. He has sought to strengthen the military aspects of the Quad, and created a new military alliance, Aukus, solely focused on China. The US continues to sell weapons to Taiwan and has dispatched US troops there on training missions, violating a long-standing taboo against such deployments. Finally, the US is acquiring long-range missiles, including hypersonic weapons, and has reconfigured the Marine Corps force structure in the Pacific for a military conflict with China in the South China Sea.

From Xi’s perspective, the US is saying one thing, and doing another.

According to Xinhua, Xi informed Biden that, in his view, the “direct cause” of the current strain on China-US relations is that “some people on the US side have not followed through on the important common understanding reached by us, neither have they acted on President Biden’s positive statements. The US has misperceived and miscalculated China’s strategic intention.” America, Xi added, has failed to deliver on virtually all of its promises to China regarding the avoidance of conflict, while simultaneously promulgating deep-seated notions of China as an “imagined enemy.”

The US, Xi added, is sending the wrong signal to “Taiwan independence” forces, which is “very dangerous.” Continuation of this would “exert a disruptive impact on China-US relations.” Xi’s remarks, made in the context of a Russian invasion of Ukraine, should not be seen as anything less than a clear warning that the US needs to start taking China’s security concerns seriously and exercise greater caution over its words and actions — lest it find that it has, again, tied a bell onto a tiger.

US to use Ukraine as Stepping Stone Toward Taiwan Provocation

0 thoughts on “The Post-Ukraine Reality of US-China Relations”