HOME / WORLD / Russia-Ukraine war: The future of the world is being decided in Beijing 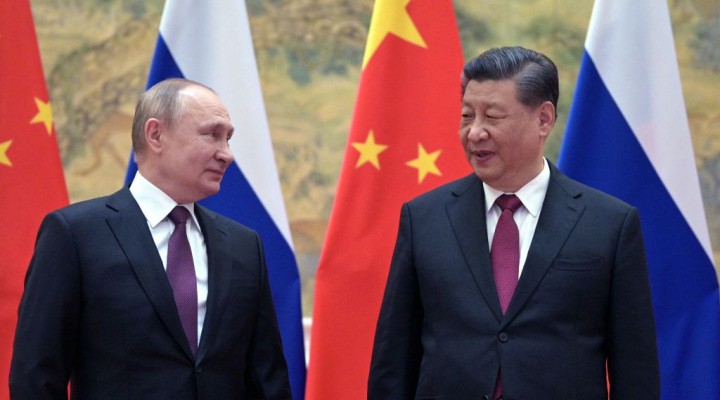 The Ukraine war reflects a major global power struggle centred around the predicted collapse of US hegemony. What China does next will have seismic implications

A decade ago, the British historian Christopher Clark wrote a masterful book, Sleepwalkers, which described how, in the summer of 1914, European nations stumbled into the First World War. The conflict in Ukraine seems to be more and more a repeat of 1914’s fateful summer.

The US, Europe and Russia should carefully consider their next moves and keep in mind the tragic lessons of a century ago. If the Covid-19 pandemic became a huge black swan, the conflict in Ukraine could turn into a black hippopotamus, a stagflationary shock.

Manichean views and zero-sum games are running rife, as the protagonists label each other Nazis and madmen.

The war is escalating rapidly. The delivery of weapons labelled as “defensive” is leading to the use of bigger and bigger rockets, some plainly capable of carrying a nuclear payload. Strategy is inflationary, too, with open advocation of a no-fly zone, as if nuclear weapons did not exist.

Nato and the EU will have extraordinary summits on 24 March and the hope is that an exit strategy might be devised. Sanctions have been put in place that are designed to cripple the Russian economy; the rouble has collapsed and part of Moscow’s currency reserves have been frozen, even by the historically neutral Switzerland.

The Anglosphere (the US, Canada and the UK) has embargoed Russian oil, sending the price of a barrel of crude on a rollercoaster, while EU countries are frantically attempting to reduce their high dependence on Russian gas.

Economic pundits predict that Russia is doomed, and its default is considered a matter of when not if. The all-too evident expectation is that sanctions will cause so much economic distress to Russia that they will likely trigger an internal revolt or coup, and then propitiate a long-awaited regime change.

At the same time, the economic blowback from these sanctions should not be underestimated.

They could have a snowball effect. While many countries are economically decoupling from Russia’s energy supplies and commodities, others may accelerate an already visible decoupling from the US dollar as the global reserve currency.

Russia and China are trading in their respective currencies and aim to launch their alternative to the western-based Swift bank clearing system. Major oil producers such as Saudi Arabia are considering trading with China in renminbi, casting a cloud on the petrodollar. India has already quadrupled its imports of Russian oil, and the two nations are considering a rouble-rupee interchange.

After the global financial stability mechanism set up by the Bretton Woods conference in 1944, and its update in 1971 with the US’s unilateral and uncoordinated end of the convertibility between the dollar and gold, some analysts are even predicting a Bretton Woods III. Should the dollar’s share of world trade decrease further, it would not be a comforting situation for the most indebted country on the planet: the United States.

Do the US Treasury and the Federal Reserve really believe they can keep on printing dollars for eternity? Do the wonks of the so-called Washington consensus really think that by persevering in the dollar’s weaponisation they can reasonably maintain its decades-old “seigniorage”?

The timing of this new crisis could not have been worse. Quoting the late Saddam Hussein, the mother of all storms is hitting the post-pandemic world economy’s recovery and the efforts to stop climate change. The Green New Deal and Covid pandemic have now been swept away from TV primetime. Virologists and green activists have disappeared from the talk shows. Starting up coal-fired power stations is even being talked about.

The world economy, already exposed to a two-year supply shock due to Covid, is now “enjoying” a 1970s-style energy supply shock. It could soon become a crisis of basic commodities, and fuel the disruption of the food supply chain, considering that Russia’s and Ukraine’s crucial wheat production and export will probably be disrupted as well.

In some countries (Egypt and Lebanon to limit oneself to the Middle East), it could mean hunger and political turmoil. There is widespread volatility. Inflation, which has been underestimated for too long, is now higher than it has been for the last four decades.

US President Joe Biden’s domestic reform agenda, already stunted by Senator Joe Manchin, appears doomed, and his hopes for mid-term election success next autumn, and Democratic hopes for the presidential ones in 2024, could be over too.

Next Generation EU, the massive €8oobn ($883bn) investment plan to get Europe out of the Covid-generated economic depression, may be hijacked or need completely rewriting.

The bare truth is that no one really knows what might happen to the world economy when the single-largest commodities producer on the planet, Russia, is sanctioned so heavily. Such uncertainty is introducing a hugely disquieting question: who will crash first? Russia under western sanctions or the western neoliberal economic and financial order because of its own sanctions’ blowback?

Other curious developments are unfolding. Former international pariahs such as Nicolas Maduro in Venezuela and Mohammed bin Salman in Saudi Arabia are now courted to mitigate the oil supply shock; and as for Iran, the hope now is that its oil and gas will flood the markets again. Saudi and UAE rulers have apparently rejected phone calls from the White House’s tenant.

Riyadh is considering trading oil with China in renminbi, and has extended an invitation to President Xi Jinping to visit the kingdom. Syria’s Bashar al-Assad has recently travelled to the UAE on his first visit to an Arab state since the Syrian war erupted in 2011.

It took a war in Europe to awaken its leadership from the torpor of its energy dependence on Russia. Now there is a frantic search for alternatives, even though neither the Soviet Union at the apex of the Cold War nor Russia over the last three decades has ever stopped supplying energy to Europe.

For countries like Germany and Italy it is a pressing issue. Liquified natural gas (LNG) from the US and Qatar is not only more expensive, but it needs additional major infrastructures such as regasification plants, which are not popular in a nimby-dominated European mind frame. Decoupling from Russian gas will be neither easy nor cheap. Above all, it will not be fast.

While transatlantic relations have been reinforced by the conflict, the EU’s widely claimed strategic autonomy is its bigger political casualty.

Europe is not only politically irrelevant, but it will also take the biggest hit in terms of blowback. It will have to geographically reorient its trade and it will have to do it under highly unfavourable economic conditions, determined by the forced diversification of its energy needs, which will imply major additional costs.

Collapse of US global hegemony

Yet the war in Ukraine is about much more than redefining Europe’s security architecture according to President Vladimir Putin’s wishes. What we are seeing is the ignition of a major global power struggle centred around the predicted collapse of US global hegemony.

The partnership that China and Russia agreed on in Beijing on 4 February has appeared unequivocal on this point. The 6,000-word joint statement Xi and Putin issued was nothing less than a manifesto against the US-led and enforced rules-based world order. Ukraine is probably the first theatre of a global epic confrontation that will decide the fate of the Russian-Chinese plan for a multipolar alternative to the American unipolar system.

Beijing and Moscow had probably hoped to co-opt Europe into the great Asian heartland economic integration project, which Russia and China have been working on for some time. This plan has nothing to do with the imposition of new politics and values on Europe.

In contrast with western democracies, China and Russia do not care about how other countries are ruled. From this point of view, they are cynically pragmatic. The Eurasian Economic Union (EAEU), the Belt and Road Initiative (BRI), the Asian Infrastructure Investment Bank (AIIB) and the Asian Regional Comprehensive Economic Partnership (RCEP) – and the hinge that the Shangai Cooperation Organisation (SCO) provides to all these multilateral projects – represent a strong pattern for continental Eurasian consolidation for the first time in history.

If accomplished, it would constitute a tectonic shift from the current world order; a strategic setback that all the 20th-century’s major Anglo-Saxon geopolitics scholars (Halford Mackinder, Nicholas Spykman, Zbigniew Brzezinski) had always warned about.

It is then fully understandable that Washington has been frantically multiplying its efforts to prevent such a scenario. This has happened by “normalising” Europe, especially Germany, fully re-binding it into the US and Nato corral; without Europe’s 500 million consumers, the Eurasian economic and trade bloc would be mutilated.

Thanks to Putin’s crass miscalculation, the conflict in Ukraine is offering two unexpected opportunities: yanking Europeans back from the Eurasian economic path; and attempting to sever the Chinese-Russian partnership.

The first objective has been accomplished, and it will be ratified when Biden presides over the 24 March Nato and EU summits.

The second is much more problematic. It would have been easier if over the last 10 years US policy had not thrown China and Russia into each other’s arms. Nonetheless, while the weaker link of the Russia-China duo is bleeding in a war of attrition in Ukraine, team Biden hopes that Beijing will be forced to reconsider its partnership with Moscow; and the more Russia bleeds, the more China may reconsider its choices and calculus.

So far, decoupling China from Russia has been unsuccessful. The meeting in Rome between Biden’s National Security Adviser Jake Sullivan and his Chinese counterpart, Yang Jiechi, was not productive. The same seems true for Biden and Xi’s phone call last week. On the contrary, the mouthpiece of the Chinese Communist Party, the Global Times, even urged Europeans to escape from the dangerous American tutelage.

Likewise for the efforts to align the rest of the international community behind sanctions against Russia. Only the Anglosphere, the EU, Japan, South Korea and Oceania have adopted them. The rest of the world seems indifferent.

Chinese leaders know perfectly that conflict with Russia is an intermediate step before going after China, which, at the bipartisan level in Washington is considered America’s major threat in the 21st century.

It would be over-optimistic, to say the least, to expect China to drop Russia altogether.

At this moment, everybody is watching the decisions that Beijing makes. It is probably the first time in the last two centuries that the future of the world order is hanging on a decision taken in an Asian capital.

0 thoughts on “Russia-Ukraine war: The future of the world is being decided in Beijing”