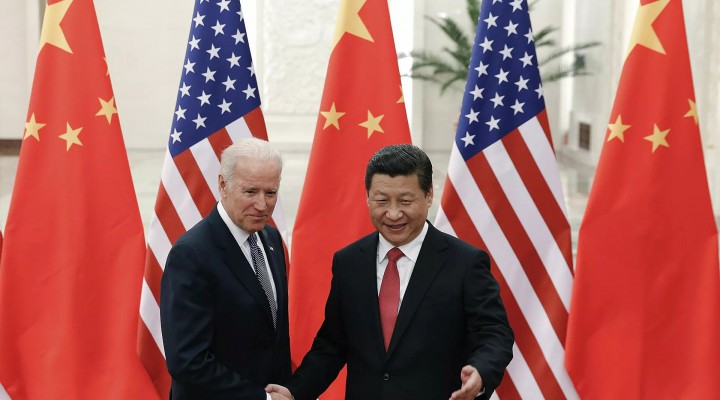 It’s a sign of the times of declining US global power that China effectively told the American side to wind their necks in. “China will not be coerced by anyone,” said its foreign minister Wang Yi commenting on the earlier video call between the two leaders.

President Vladimir Putin and President Xi unveiled a strategic partnership last month that precisely rejects US hegemonic ambitions and Cold War geopolitics of divide and conquer. Russia and China are calling for a multipolar international order based on mutual partnership and respect. Such a vision is intolerable for US-led Western capitalism.

Beijing understands that the ongoing conflict in Ukraine is a direct result of American and NATO hostility towards Russia. Years of aggression and destabilization through supporting Neo-Nazi paramilitaries like the Azov Battalion have blown up into the present violence.

For Biden to arrogantly demand Xi to join Western economic warfare against Russia is American hubris taken to sublime levels.

Washington has succeeded in getting its European vassals to shoot themselves in the foot by thwarting energy trade with Russia. Now, the Americans want China to do the same. China’s global economic power is driven by a vast supply of Russian gas and oil. The Americans want to sabotage China’s ascent as an economic power to offset their own historic demise as a bankrupt capitalist has-been, and for that Washington is demanding Beijing to forfeit its relations with Moscow. You could hardly make this American conceit up.

China can see through the nauseating hypocrisy of Biden and others in Washington. The American posturing and pontificating towards Russia about alleged violations of international law in Ukraine are sickeningly absurd given the litany of criminal wars and destruction from the US and its NATO gangsters. Biden himself is personally responsible for facilitating criminal wars in dozens of countries during his decades-long political career in Washington. But it’s not just about hypocrisy.

The fact is the Americans and their unipolar hegemonic mindset and ambitions of dominance have led to the crisis in Ukraine. China understands that the only way to avoid conflict is for a mutual security treaty to be established for Europe, one that involves mutual negotiations with Russia. But such negotiations and security treaty are anathema to the Cold War logic of Washington and its NATO partners. Russia tried to negotiate through diplomatic proposals but was continually rebuffed by the US and NATO.

Another crucial aspect of America’s delusions about pitting China against Russia is that Beijing knows full well that the very same nefarious game is being played by Washington with regard to Taiwan.

The Americans are brazenly weaponizing the island territory to undermine China’s national security and strategic balance. Even though Washington officially recognizes Taiwan as an integral part of China under Beijing’s sovereignty, the Americans are doing everything to inflame tensions between the mainland and the island. The US under Biden is weaponizing Taiwan with the apparent objective of inciting conflict with China. This is analogous to what Washington and its NATO allies have done to Ukraine.

When Biden tried to lecture Xi last week about China being expected to not support Russia what the American was trying to do was pressure Beijing with moral blackmail to join US-led efforts to subjugate Russia. The Americans are so full of their own self-righteous arrogance and propaganda they don’t even realize when they look stupid.

President Xi reportedly gave Biden a brush-off and reminded him of China’s priority concern over America’s nefarious machinations on Taiwan.

China supports Russia as a matter of international principle and shared vision of a more viable global order based not on American hegemony, but rather on mutual respect. China also knows that if Washington were to ever succeed in somehow subjugating Russia to its diktat, the US would move quickly to target China for its next act of imperialist bullying.

Joe Biden is the personification of US presumed global power: frail and oblivious to its own demise in a changing world. Ordering China around is like a drunk in the Last Chance Saloon ordering another round he can no longer pay for.

0 thoughts on “American Delusions of Pitting China against Russia”