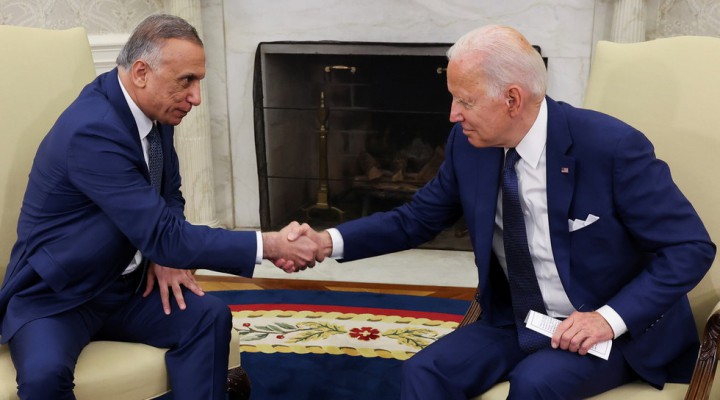 Biden’s announcement that the US combat mission in Iraq will come to an end by the end of the year hides the reality that their presence in Iraq shields a broader combat mission in Syria and Iran. It’s not ending anytime soon.

Joe Biden recently announced that the US combat mission in Iraq will conclude by the end of the year. This announcement reflects the reality on the ground more than a major shift in US policy, and as such operates more as an exercise in semantics than a portent of any withdrawal of US forces from the region. According to the president, the US military will transition away from a hands-on combat role to one which focuses on training, advising and intelligence-sharing with supported Iraqi forces. “Our shared fight against ISIS is critical for the stability of the region and our counterterrorism operation will continue, even as we shift to this new phase we’re going to be talking about,” Biden said. There are currently some 2,500 US troops in Iraq.

Current US combat operations in Iraq appear to be the sole purview of elite Special Operations Forces drawn from so-called “Tier-1” Special Mission Units assigned to the Joint Special Operations Command. These units include the Army’s Delta Force, the Navy’s SEAL Team 6, Marine Raiders, Army Rangers, Air Force Combat Control Teams, and Army Special Operations helicopter units from the 160th Special Operations Aviation Regiment. While the Department of Defense is tight-lipped about the deployment and operational tasking of these units, media reports indicate that as of earlier this year, elements of the US Army’s Delta Force, operating in concert with units from the British Special Air Service, were engaged in special reconnaissance missions inside Iraq designed to locate and identify targets affiliated with the Islamic State for subsequent destruction by coalition aircraft.

These forces operate from a compound near Erbil International Airport – not coincidentally, the same location as a secret CIA compound recently attacked by unmanned drones. JSOC and the CIA often collaborate on anti-terrorist operations such as the raid that killed Abu al-Baghdadi in October 2019, which was also launched from Erbil. While the JSOC/CIA operations include an anti-ISIS mission in Iraq, they also are engaged in anti-ISIS operations inside Syria (as evidenced by the al-Baghdadi operation), and an ongoing covert war against the Iranian Quds Force and pro-Iranian militias operating in Iraq and Syria. This is underscored by the US air strikes on targets in and around Al Qaim/Abu Kamal this year.

The US military presence in Erbil, which includes the JSOC/CIA elements, along with supporting aviation, intelligence, and logistics forces, is the heart and soul of US military operations in Iraq and the Levant as a whole. Any effort to end the combat-related missions of the units based there would prove fatal to the US military presence in Syria, which currently stands at around 900 personnel. The US operates in Iraq at the invitation and (for the most part) with the consent of the Iraqi government. The same legitimacy does not apply to US forces operating in Syria, who are there against the wishes of the Syrian government. While the US forces in Syria provide combat support to the Kurdish Syrian Defense Forces, the Kurds lack the status of a sovereign state and as such impart no legitimacy to the US deployment and operations in that nation. For this reason, the US forces in Syria operate on an expeditionary basis, completely dependent upon a supply line that leads back to Erbil.

While President Biden may claim that the US combat mission in Iraq will be over by the end of the year, this does not mean US combat forces will be leaving Iraq. It appears that this subterfuge will be supported by the Iraqi government. When asked by Voice of America if the Iraqi government would allow the US to continue to use bases inside Iraq to support its military mission inside Syria, the Iraqi Foreign Minister, Fuad Hussein, noted that the “US military forces in Syria have a unique status and Iraq is not involved in that. However, we always discuss with the Americans the presence of [ISIS] in Syria, because clearly its presence there poses a threat to Iraq too.”

The reality is that the Biden announcement about US troops in Iraq is a lie – there will be virtually no change in US force in that nation. The “end” of combat operations simply reflects the reality as it has existed on the ground in that nation since the assassination of Qassem Suleimani, Abu Mahdi al-Muhandis, and three other members of the pro-Iranian militias at Baghdad International Airport in January 2020. In the aftermath of the Iranian retaliatory missile strike on US forces in Al Asad Air Base, the US military in Iraq assumed a force-protection posture, with anti-ISIS operations coming to a virtual halt (the only exception being the ongoing activities of the JSCOC/CIA units operating in Erbil). Biden’s announcement simply provides political cover for the US forces in Iraq to legitimize the posture they have already assumed, namely an advisory and support capacity which pushes the actual job of destroying the ISIS enemy on the shoulders of the supported Iraqi forces. The counterterrorism mission waged by JSOC and the CIA will continue unabated.

The problem with lies is they never occur in isolation. Biden’s lie about the end of the combat mission for US forces deployed to Iraq is but one of many lies that have come to define the US military presence in both Iraq and Syria. If the Afghanistan debacle has taught us anything, it is that meaningful consequences accrue from the lies told regarding military operations. The US spent 20 years lying about its military mission and activities inside Afghanistan. Today, the rapid collapse of the US-trained Afghan security forces in the face of the US withdrawal stands as testimony to what those lies gave us.

At some point in time, the US will be called upon to pay the piper regarding its military operations in Iraq and Syria. The fact that the US government has consistently lied about the ongoing combat mission in both Iraq and Syria, lied about the nature of the US military presence in Syria, and lied about the covert war being waged against Iran from bases in Iraq and Syria, means that the American people and those whom they elect to represent them in Congress are buying into policies they believe are for the purpose of accomplishing X, only to find out later that they were accomplishing Y. Such duplicity is ultimately doomed to fail. All Biden’s current lie about US forces in Iraq has accomplished is to kick the can of accountability down the road another time. But there will be an accounting, and the results will be ugly.