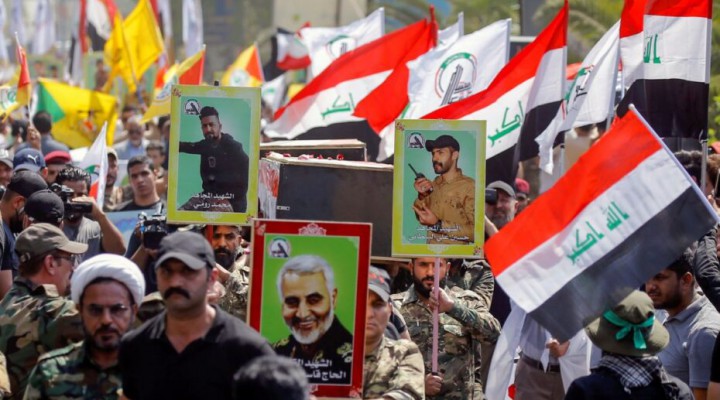 Joe Biden is continuing down the path that began with George W. Bush, with military action used as a substitute for any real foreign policy.

In less than six months in office President Joe Biden has already developed a national security policy that appears to lean strongly towards proactive use of military force in questionable circumstances, as if war is the answer to every problem. Biden should nevertheless be applauded for his persistence in withdrawing from Afghanistan after twenty years of ill-considered nation building, but even the departure from that country appears to be characterized by a lack of coordination, rather reminiscent of helicopters taking off from the embassy roof in Saigon in 1975.

For the second time the president has ordered a US bombing raid on two targets in Syria, and for the first time, he also attacked a site inside Iraq. According to one report possibly as many as seven Iraqis died in the attacks which targeted alleged weapons storage facilities along the Syria-Iraq border belonging to Kata’ib Hezbollah and Kata’ib Sayyid al-Shuhada militias. The US claims that the two Iraqi militias have ties to Iran, which may be more than usually true because the Iraqis and Iranians have cooperated regularly in the fight against the Islamic State in Syria (ISIS). The Pentagon also claims that the militias were behind recent attacks on American targets, see more below.

After the attacks carried out by US fighter-bombers, the excuse provided was the same one employed after Biden’s first air attack in February, namely that the US, as described by Pentagon spokesman John Kirby, “conducted defensive precision airstrikes against facilities used by Iran-backed militia groups in the Iraq-Syria border region.” He added verbiage what has now become a regular feature of all US military actions, that “the United States acted pursuant to its right of self-defense.” For those who are intrigued by Pentagon newspeak the expression “defensive precision airstrikes” must be considered as a new entry in the crowded field of phrases that largely have no meaning.

The strikes were framed as being retaliatory, but the most interesting aspect of this latest bombing is that the initial US government justifications for the action were on somewhat tentative. Reportedly, someone had used drones with explosives attached for mostly night-time attacks directed “against places where Americans were located in Iraq,” which were further described as including diplomatic, intelligence and military facilities. The Pentagon refers to the drones as “unmanned aerial vehicles” or UAVs. No Americans were killed in the alleged attacks and there were no reports of any substantial damage, though the Pentagon is apparently collecting information and preparing a comprehensive report which the public undoubtedly will not be allowed to see.

Oddly, the initial media reporting on what had occurred and who had been blamed for it included a weasel word, “suspected.” In government-speak that frequently means there was little or no evidence that the militias that had been targeted were actually the perpetrators, but it is convenient to assume that they are responsible, making them “suspects.” After all, it is relatively easy to transport a number of drones on the bed of a pickup truck, drive with it to a location where one is unlikely to be observed and then release them at a fixed target. Even if you don’t hit anything, you will spread fear and trigger a response that might well be exploited to vilify the occupying forces. You will also provide justification for your own retaliation.

The Iraqi government, which was not informed in advance of the US bombings, not surprisingly reacted strongly, registering its opposition to such activity on the part of its so-called ally, though occupier has been suggested as a more appropriate description. Prime Minister Mustafa al-Kadhimi’s office called the airstrikes a “blatant and unacceptable violation of Iraqi sovereignty and Iraqi national security.” After the assassination of General Qasem Soleimani at Baghdad Airport in January 2020, the Iraqi Parliament had called for the departure of all US forces, but the Trump Administration ignored the demand, claiming that it was in Iraq to help the Iraqis in their fight against ISIS and other terrorist groups.

The US currently has a claimed 2,500 soldiers in Iraq who, it asserts, are in country advising and training their local counterparts. Meanwhile, “Fighting terrorists and training friendly forces” is roughly the same excuse that has been used to justify remaining in neighboring Syria, where the US has deployed roughly 500 soldiers who have been taking possession of the production of the country’s oil fields, which it then provides to Israel. The US is also, by the way, trying to overthrow the legitimate Syrian government in Damascus, using some of the very terrorists it claims to be fighting to do the job, but that is of course another story.

If the United States government is beginning to sound a bit like the Israeli government that should surprise no one, as Israel is clearly heavily involved in whatever on goes vis-à-vis Syria and Iran directly and in Iraq by proxy. One almost expects new Israeli Prime Minister Naftali Bennett to provide an endorsement, parroting the Pentagon line as well as his own country’s rhetoric, saying “the US has a right to defend itself.” Of course, the unasked question then becomes “to defend itself against what?” Israel was at least able to pretend that there was some kind of threat coming from Gaza since the two share a border, but the United States would be hard pressed to explain why it has soldiers in Syria and Iraq at all, particularly since the Iraqi government has called upon them to depart.

A neocon journalist supportive of a global crusade to spread “democracy” once quipped that the nice thing about having an empire is never having to say you are sorry, but that has not meant that mindless acts of violence inflicted throughout the Middle East are have been consequence free. One has to suspect in this case that the use of force to include a target within the borders of a nominal ally was also mostly intended to send a signal to Iran. A Pentagon spokesman ironically boasted afterwards that “This action should send a message to Iran that it cannot hide behind its proxy forces to attack the United States and our Iraqi partners.” The spokesman appears to be oblivious to the fact that it was Iraqi militiamen tied to the government that had been killed, not Iranians. And his assumption that it would reduce the level of violence also proved wrong as there have been a number of new drone, rocket and mortar attacks against American targets in Iraq since Biden’s “defensive precision airstrikes” were launched. One of the militias that lost fighters to the US airstrikes, said it would “avenge the blood of our righteous martyrs.”  Another Iranian supported group, the Popular Mobilization Forces went further, threatening to “enter an open war with the American occupation.” In short, all the attacks really accomplished was to anger the Iraqi people over the continued US presence and to guarantee more incidents.

Biden’s “sending a message to Iran” would undoubtedly be intended to do the same to the Iraqi government, telling them that drawing any closer to the Iranians is too close as far as the Pentagon and White House are concerned. In terms of the timing of the airstrikes, it is also important to note that the US has been working closely with the new Israeli government to establish a unified policy on Iranian “regional aggression” and its nuclear program. Biden met recently with retiring Israeli President Reuven Rivlin at the White House and Secretary of State Antony J. Blinken has been having discussions with Israel’s foreign minister, Yair Lapid. Iran was the focus of both meetings.

So, Joe Biden and whoever is advising him are continuing down the path that began with George W. Bush, with military action used as a substitute for any real foreign policy. The problem with the meddling in the Middle East is primarily that it permits no exit strategy. It will end ignominiously when it ends as is happening in Afghanistan, without any remorse and little to show for all the expense and the deaths. Given that reality, rather than concoct largely fabricated reasons to keep US troops in Iraq and Syria the Administration should be looking for ways to end the torment for everyone involved.