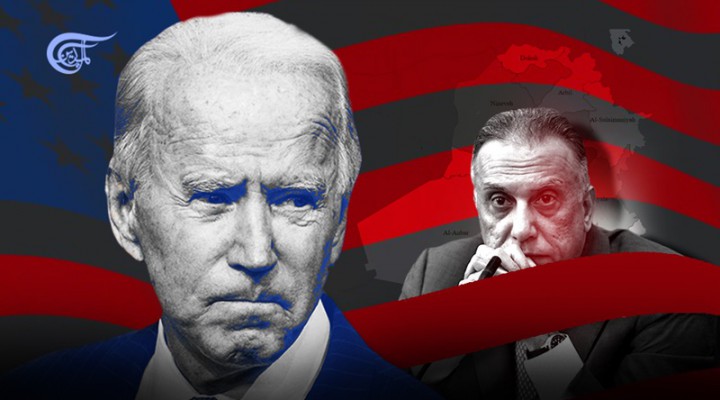 The US Administration is pushing itself to the edge of an abyss and has put its ally in Baghdad, Prime Minister Mustafa Al-Kadhimi, in an embarrassing and weak position as he faces his own security forces and political parties.

The Iraqi government is incapable of keeping the new US Administration in check or retaliating: US President Joe Biden has clearly decided to use Mesopotamia as the theatre for the US’s military operations. The US jets have attacked regular Iraqi security forces, calling them “Iran-backed militia”! Taking this step, the US is effectively inviting the “Islamic Republic” to a duel by declaring that the killing of four Iraqi officers – deployed on the borders with Iraq to monitor the movement of the terror group ISIS – is a “message to Tehran”.

The US Administration is pushing itself to the edge of an abyss and has put its ally in Baghdad, Prime Minister Mustafa Al-Kadhimi, in an embarrassing and weak position as he faces his own security forces and political parties. President Biden and his team are not serious or honest about fully withdrawing from Iraq, and the intention to keep US forces in Mesopotamia will trigger an inevitable escalation, in the coming months, undoubtedly.

The violation of Iraqi sovereignty is giving legitimate grounds for different Iraqi Resistance groups to escalate military operations against the many US military bases deployed in the country after the US’s “inexplicable” attack. Following the standing decision of the Iraqi parliament that all foreign forces must leave the country, al-Kadhimi’s August trip to Washington is expected to discuss the fate of the 2,500 US personnel remaining in Iraq. Iraqi politicians fear the consequences of the demand by Iraq for withdrawal, and the US Administration takes every opportunity to manifest its desire to keep some troops in the country. So the US’s prolonged stay in Iraq may well spark an escalatory cycle towards a broader conflict.

Why is al-Hashd al-Shaabi demonised?

Before al-Hashd al-Shaabi (the Popular Mobilisation Forces-PMF) came into existence to fight ISIS, several Iraqi resistance movements had been formed to liberate the country from the US’s self-declared occupation forces in 2003. These groups acquired warfare experience in guerrilla tactics and inflicted significant damage on the US occupying forces.

In 2014 the Iraqi tribes of al-Anbar, Nineveh and Salahuddin joined the “Jaysh Rijal al-Tariqa al-Naqshabandia” and “ISIS” in occupying a third of Iraq.The same resistance movements who fought against the US occupation forces stopped the new occupiers’ advance towards Baghdad. These resistance groups are “Kataeb Hezbollah”, “Asaeb Ahl al-Haq, Saraya al-Salam”, and the BADR-military wing.

Following fierce fighting, they filled the vacuum created by the chaotic withdrawal of the Iraqi army and security forces and managed to stop ISIS at the gates of the capital Baghdad. The central government was confused and ordered the “free withdrawal” of all forces, which then triggered the massacre of many cadets (the Camp Speicher massacre) as they were leaving the northern area of Salahuddin towards the safer, southern Iraq.

This was when the Grand Ayatollah Sayyed Ali Sistani issued his Islamic Fatwa of “Jihad Kifaei” the call to arms of all volunteers to fight for the liberation of their country. Thousands of civilian volunteers gathered at the Iraqi army centre for recruitment situated in the Muthannah Province. Due to the large number of enthusiastic volunteers, the confusion of the local military officers reached a level where coordination with the Ministry of Defence was lacking, and the recruitment centre had no orders, programme or weapons to train and arm the new recruits.

The resistance movements, who were spread along different parts of the front, agreed to host and accommodate thousands of these recruits. Consequently, the large number of new recruits strengthened the resistance groups, whose numbers boomed considerably. Volunteers were taken to the battlefield after two weeks of hasty training, due to the significant danger of ISIS and of the tribes joining the terrorist group.

(Former) Iraqi Prime Minister Nouri al-Maliki called upon Iran for support. A group of newly arrived and experienced advisors from Lebanon and Iran organised training bases, and another group joined the operational fronts.

Following four years of intensive battle, ISIS was defeated. In 2018, Prime Minister Haidar Abadi issued a decree formalising the inclusion of al-Hashd al-Shaabi members in the security forces to receive salaries and social security like any other members under the Interior and Defence Ministries. However, Abadi set requirements which forced many PMF members to join the official security forces under his command. Those unwilling to do so chose either to retire and or to join the resistance movements, strengthening their ranks.

Nevertheless, the West and researchers insisted on calling al-Hashd al-Shaabi “Iran-backed militia” due to the confusion between the PMF (under the Prime Minister’s command) and the resistance groups. Moreover, the success of this ideology-backed force (PMF) that was the spearhead in fighting and in defeating ISIS on all fronts is apparently a source of concern to all “enemies of Iraq”. Over 120,000 PMF strong men with a robust ideology definitely worry a US Administration that wishes to have no credible opponents whatsoever in Iraq.

Al-Hashd al-Shaabi is indeed a threat, not only to the US forces, if these remain in the country; they can also respond to any other danger that could threaten Iraq from neighbouring countries. This ideological force will stand strongly against the idea of dividing Iraq into Kurdistan, Sunnistan and Shiistan “states”. Al-Hashd al-Shaabi stood firm against the Kurdish referendum to split Kurdistan from Iraq and the Turkish intention to occupy Sinjar. Moreover, al-Hashd al-Shaabi is one of the leading forces deployed on the borders to hunt down ISIS all along the edges of the long Iraqi frame, especially with Syria. The confusion of al-Hashd al-Shaabi with the resistance groups, and the power of their strong ideology would seem to be the main reasons western governments and researchers misunderstand and demonise the PMF.

The US hits its ally in Baghdad

Under President Joe Biden’s command, the US forces hit the Iraqi security forces for the second time along the Iraqi borders. According to international law and the conditions under which the US forces are deployed in the country, this constitutes a clear violation of Iraqi sovereignty. Moreover, it is a blow beneath the belt, unmerited by the US’s strong ally, Prime Minister al-Kadhimi.

In fact, the Iraqi Prime Minister has confronted al-Hashd al-Shaabi on more than one occasion, winning support from those who had wrongly regarded al-Hashd as a rebellion force under Iran’s command. The US bombing of al-Hashd al-Shaabi, however, puts al-Kadhimi in an awkward position. The election of the Prime Minister was the fruit of an agreement between the influential political party leaders with two objectives in mind: the withdrawal of the foreign forces following the US assassination  of Brigadier General Qassem Soleimani and Commander Abu Mahdi al-Muhandes, and secondly, to establish an early parliamentary election.

The US forces in fact proved to be maintaining a combat force: they struck Iraqi security forces with no procedural impediments and no accountability whatsoever, directly threatening the country’s domestic stability. Hitting an Iraqi static position 17 kilometres away from the borders and causing the death of four Iraqi security forces officers was a crime committed with deliberation. Importantly, the Iraqi Parliament has never passed a law providing immunity for US forces nor protecting them from condemnation in the Iraqi courts.

Washington opened the gates to a broader confrontation when it said the attack against al-Hashd al-Shaabi was a message to Tehran. The US thereby shows that it considers Mesopotamia a legitimate battlefield for settling its account with Iran. This totally disregards the Iraqi government’s position which separates Iraq, the sovereign country, from the US’s conflict with Iran. The Biden Administration is undermining the Iraqi leadership, betraying it in front of the other regional leaders, just at a time when al-Kadhimi is trying to play the opposite role, one which would transform Iraq into a reconciliation ground for inter-regional differences and struggles.

What will happen: will Iran accept or ignore the US invitation to a duel on Iraqi soil? Iran is known for its unwillingness to make an impetuous response. Tehran allows its allies to respond. As regards the bombing of the US-occupied al-Omar oil field, it was a retaliatory move for the killing of four Syrian civilians on al-Bu Kamal borders with Iraq by the US jets.

Notwithstanding the progress or failure of the nuclear deal under negotiation between the US and Iran, the two countries are destined to remain enemies. This is an undeclared open war. It is not impossible to guess who the winner will be in the future. Since the US War of Independence in 1776, history is replete with cases where occupation forces are forced to leave when there is strong resistance against them, when part of society rejects their presence, and when it is willing to fight for its freedom. All US soldiers will depart from Iraq: it is only a matter of time.