HOME / WORLD / Pompeo pushes allies to increase funding to fight ISIS, but US’ real goal is setting up a front for countering Iran (yes, AGAIN) 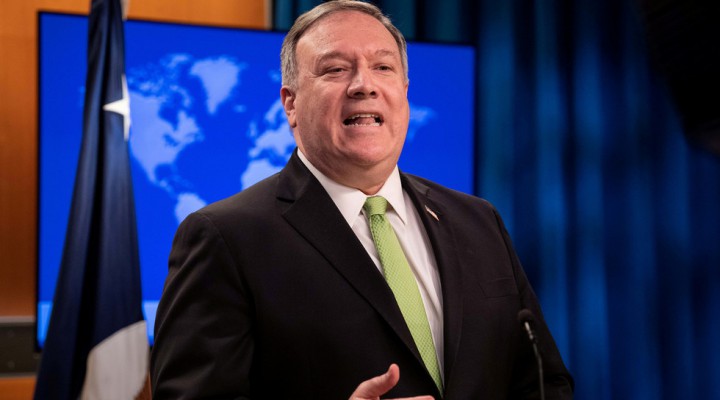 Despite President Trump’s previous claims that Islamic State has been 100 percent eliminated, the US is seeking international funding for continued anti-IS military operations. The true target of this effort, however, is Iran.

Secretary of State Mike Pompeo has called on the international community to overcome the economic constraints imposed on the global economy and provide more than $700 million in order to confront the threat posed by Islamic State (IS, formerly ISIS) in Iraq and Syria.

“It’s true that the pandemic is putting enormous pressure on all of our budgets,” Pompeo said on Thursday at a Ministerial Meeting of the Global Coalition to Defeat ISIS. “That said, our fight against ISIS continues and will for the foreseeable future. We cannot rest. We must continue to root out ISIS cells and networks and provide stabilization assistance to liberated areas in Iraq and Syria.”

The fact that the US is seeking to mobilize an international coalition to defeat IS runs counter to both the narrative that had previously been presented by the Trump administration that IS had been “100 percent” defeated, and the reality that the anti-IS fight had been relegated to the back burner of US foreign policy objectives in the Middle East in favor of a more robust policy of containing and confronting so-called “malign activity” by the government of Iran.

On December 19, 2018, Trump stunned his national security team — and his anti-IS coalition partners — by tweeting out, “We have defeated ISIS in Syria, my only reason for being there during the Trump Presidency.” Based upon the president’s directive, US officials began preparing for the withdrawal of US forces in northeastern Syria, where they were in the final phases of a campaign to eradicate the last remaining IS bastion. Trump’s decision prompted the resignation of Secretary of Defense James Mattis.

The controversy as to whether or not IS had, in fact, been defeated by the US-led coalition was further fueled in January 2019 when, on the same day that an IS attack in Syria killed three Americans, Vice President Mike Pence told a State Department conference that “the caliphate has crumbled and ISIS has been defeated.” President Trump reinforced that sentiment a month later when, during a stopover in Alaska, he told an assembly of US servicemembers, “We just took over…you kept hearing 90 percent, 92 percent, the caliphate in Syria. Now it is 100 percent. We just took over 100 percent caliphate.”

But presidential rhetoric does not, in and of itself, constitute fact. Both the State Department and the Department of Defense soon were compelled to correct the record. In comments to CBS News on August 20, 2019, Pompeo noted “There’s certainly places where ISIS is more powerful today than they were three or four years ago. But the caliphate is gone and their capacity to conduct external attacks has been made much more difficult. We’ve taken down significant risk — not all of it, but a significant amount.” Pompeo’s comments came on the heels of a report by the Pentagon’s Inspector General which concluded that “Despite losing its territorial ‘caliphate’, Islamic State in Iraq and Syria solidified its insurgent capabilities in Iraq and was re-surging in Syria.”

Despite these stark conclusions, in October 2019 President Trump, following a telephone call with Turkish President Recep Tayip Erdogan, ordered all remaining US troops out of Syria, clearing the way for a Turkish military offensive against Kurdish forces that were part of the US-led anti-IS coalition, but which Turkey called terrorists. In the confusion that followed, the anti-IS coalition all but dissolved. And when, shortly after ordering US troops out of Syria, Trump reversed course, the new mission was not centered around defeating IS per se, but controlling Syrian oil resources and holding territory in an effort to undermine the government of Syrian President Bashar Assad and oppose the presence of Iranian forces deployed to that nation at the behest of the Syrian government.

Since that time, the US has engaged in a series of military clashes with pro-Iranian militias in Syria and Iraq as part of a larger proxy war targeting Iran. In early 2020 the struggle against IS all but disappeared as a US objective, with American troops standing down their anti-IS focus entirely so as to prepare for a potential conflict with Iran.

The coronavirus pandemic has dampened any support that might have existed for a broader US-Iranian conflict, with the entire world focused instead on how to deal with the vast social and economic consequences of a global lockdown designed to limit the spread of the disease.

It is in this context that Pompeo’s request for funds to counter the threat posed by IS must be assessed — faced with the reality that the world will not rally around a US-led war against Iran, the Trump administration is left with no choice but to resurrect the specter of IS in an effort to manufacture international support for its continued military presence in the Middle East. In the end, this is a policy doomed for failure, with the US unlikely to assemble a viable anti-IS coalition. Even if such a coalition can be cobbled together, the geopolitical realities attached to both Iraq and Syria make it virtually impossible for it to be sustained over time.

0 thoughts on “Pompeo pushes allies to increase funding to fight ISIS, but US’ real goal is setting up a front for countering Iran (yes, AGAIN)”