HOME / WORLD / Iran and the US: a new front opens 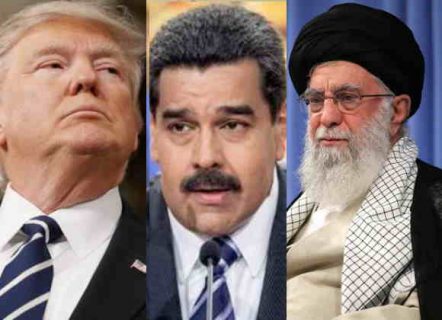 A new front could open up at any time in the conflict between Iran and the US, not in the scorching waters of the Gulf but in the faraway Caribbean Sea. We are all bracing for the fuse to be lit or the trigger pulled.

It began when the Iranian authorities decided to send five tanker-loads of fuel to Venezuela to help their ally, President Nicolas Maduro. His country is suffering a severe gasoline shortage due to US sanctions, which have blocked its access to fuel imports and prevented it from obtaining the parts needed to maintain its oil refineries.

US President Donald Trump proceeded to order four American warships supported by fighter jets to the region, amid reports they will attempt to prevent the Iranian vessels from delivering their cargoes, even if that entails the use to force.

This is not the first time Iran has come to its Venezuelan allies’ aid. But against the backdrop of ever-rising tensions between the US and Iran in the Gulf, and with both sides exchanging threats, the impetuous Trump could well order military action against the tankers that are defying him and his embargo right in his backyard.

Iran does not have the means to protect its tankers in the Caribbean if that happens. But it can retaliate against the hundreds of American naval vessels large and small that ply the waters of the Gulf. That is why Trump threatened to fire on any Iranian boats that come within 100 metres of his ships in the region.

Iran’s Revolutionary Guards for their part issued a statement warning that any move by the US against the Venezuela-bound tankers would be an act “piracy” that would have “consequences”.

We may be in for a repeat of last summer’s drama when the British authorities impounded an Iranian tanker taking crude oil to Syria – in defiance of another American-decreed embargo — as it passed through the Strait of Gibraltar. The Iranians reacted by immediately seizing a British tanker in the Gulf, and held on to it until their ship was released first. They can be expected to do the same to American vessels if their tankers are harassed or attacked.

Iran has a record of standing by its allies, whether in Syria or Latin America, and it feels indebted to Venezuela for supporting it against US sanctions and pressure before it, too, was subjected to the same.

The opening move may be made in the Caribbean, but the showdown would ensue five thousand miles away in the Gulf – unless, as on several previous occasions, Trump backs down.

0 thoughts on “Iran and the US: a new front opens”