HOME / WORLD / America on cusp of a Civil War: No matter who wins the election, there will be no peaceful transfer of power

America on cusp of a Civil War: No matter who wins the election, there will be no peaceful transfer of power 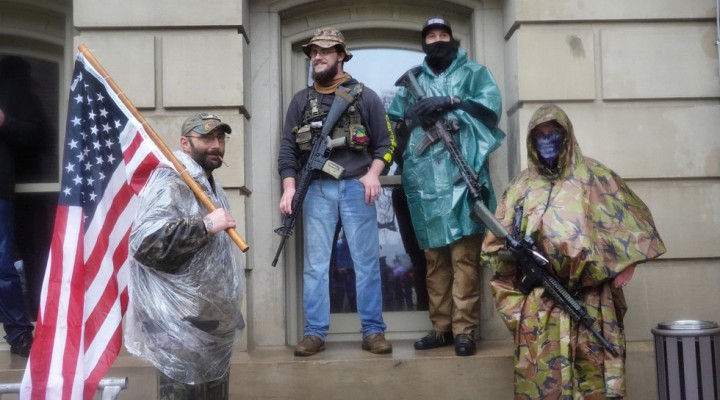 Failed plot to allegedly kidnap Michigan Governor is precursor for a larger political battle over the US’ future where opponents lack any common ground and neither side is ready to accept an election result where they lose.

A foiled plot by 13 self-described “militia” to allegedly kidnap Michigan Governor Gretchen Whitmer underscores just how dangerous the political divide is in America today. Words that address areas of legitimate political disagreement run the risk of fueling partisan rancor in a country that appears to be on the cusp of civil violence the likes of which it has not seen since the rioting of the 1960’s.

The case against the members of the “Wolverine Watchmen”, a Michigan-based militia, is fairly straightforward—they are accused of plotting to kidnap Governor Whitmer. But the effort by leading Democrats, including Governor Whitmer and Joe Biden, to shift the blame onto President Trump, is not as cut and dry as they make it.

“Just last week, the president of the United States stood before the American people and refused to condemn white supremacists and hate groups, like these two Michigan militia groups,” Governor Whitmer said in a statement after the indictments of the 13 suspects in the alleged plot to kidnap her was announced by the FBI. “’Stand back and stand by,’ he told them. ‘Stand back and stand by.’ Hate groups heard the president’s words not as a rebuke but as a rallying cry, as a call to action.”

Whitmer was referring to President Trump’s answer during his debate with Joe Biden, when he was asked by the moderator, Chris Wallace, to condemn white supremacists. While Trump has in the past condemned white supremacists on numerous occasions, he fumbled his response to Wallace, opening the door for his political opponents to accuse him of encouraging, rather than condemning, the actions of White Supremacist groups like the Proud Boys, who had been singled out by Wallace and Biden during the debate.

In raising Trump’s debate performance, however, Whitmer and Biden miss the point. What happened in Michigan was not an expression of White Supremacy gone wild, but rather an issue of governmental abuse of power and the feeling of frustration on the part of a certain segment of the population that there is little, if anything, the people can do in the face of such abuse.

A look at the FBI indictment reveals that the plot to kidnap Whitmer supposedly grew out of a June 2020 meeting where the participants, some of whom would be included in the indictment, discussed overthrowing state governments “that they believed were violating the US Constitution.” Whitmer’s name was mentioned in this context.

The “Constitutional violations” alleged by the plotters were linked to measures that Whitmer imposed in April 2020 in response to the Covid-19 outbreak. These measures led to wide-scale protests against Whitmer, including the occupation of the Michigan State Capitol by armed citizens. On April 17, 2020, President Trump tweeted out “LIBERATE MICHIGAN” in support of these demonstrators, followed by a May 1 tweet where he wrote, “The Governor of Michigan should give a little, and put out the fire. These are very good people, but they are angry. They want their lives back again, safely! See them, talk to them, make a deal.”

Whitmer ignored the President, and the resulting resentment helped fuel the anger that underpinned the June meeting where the plot to kidnap the governor was believed to have been hatched.

While the decision by the “Wolverine Watchmen” to perhaps act out against Governor Whitman constitutes a crime of the most egregious nature which cannot be tolerated under any circumstance, the fact is the underlying concern articulated by the militia members in justifying their actions—that Governor Whitmer was violating their constitutional rights—has been shown to have been legally sound.

On October 2, 2020, the Michigan Supreme Court struck down the very measures that had prompted the April occupation of the State Capitol as “unconstitutional”, noting that the Governor could not bypass the State legislature—which in Michigan is controlled by the Republicans—in passing the Covid-19 containment measures under an emergency decree.

The Michigan Supreme Court ruling comes on the heels of a similar ruling by a Federal District Judge, William Stickman IV, who struck down similar pandemic containment measures in Pennsylvania as “unconstitutional”, noting that “even in an emergency, the authority of government is not unfettered. The Constitution cannot accept the concept of a ‘new normal’ where the basic liberties of the people can be subordinated to open-ended emergency mitigation measures.”

These two judicial rulings underscore the philosophical divide between Democrats and Republicans when it comes to Covid-19 response.

Michigan Attorney General Dana Nessel told reporters that Michigan Republicans and law enforcement were complicit in the plot against Whitmer because they “attended a number of their events.” Nessel also singled out Trump’s “Liberate Michigan” tweet as an example of encouraging the militia to kidnap Whitmer. “These guys think that he’s talking to them,” Nessel said. “I mean, he actually said, if you recall, that the governor ought to sit down and negotiate with these armed gunmen.” Joe Biden jumped on the bandwagon, responding to a question as to whether Trump’s “LIBERATE MICHIGAN” tweet encouraged militias by stating, “Yes, I do.”

The fact of the matter is, however, that Trump’s tweet had nothing whatsoever to do with the illegal actions or not of the “Wolverine Watchmen”, and everything to do with the constitutional rights of Michigan citizens. There can be no escaping the hard truth that Trump and the demonstrators were correct in calling out Whitmer’s actions as unconstitutional, something Biden may want to reflect on before rushing to throw in his two cents.

For his part, Trump has responded to Whitmer’s allegations of Presidential malfeasance by declaring “I do not tolerate ANY extreme violence. Defending ALL Americans, even those who oppose and attack me, is what I will always do as your President! Governor Whitmer—open up your state, open up your schools, and open up your churches!”

The Michigan imbroglio is but a microcosm of a greater divide which exists in America today, one that has been brought to sharper focus by the Covid-19 pandemic. Trump’s electoral victory in 2016 exposed the reality that there are, in all actuality, two America’s. One is reflective of values more or less in line with Donald Trump’s revanchist theme of making America great again (all the while attacking the very establishment responsible for making it great to begin with), and another which is roughly aligned with the progressive wing of this very establishment which seeks to redefine America on terms that largely reject the past practices which serve as the core of Trump’s vision of greatness.

Trump’s personal and political struggle with the Covid-19 pandemic has led to an outright civil war with his democratic opponents, where everything has become politicized to the point of national paralysis, where legislation designed to help working class families in need is being held up out of fear that its passage will be seen as helping one side more than the other. Likewise, Trump’s desire to open the economy back up, thereby fueling a major political strength of his on the eve of his re-election bid, is countered by Democratic opposition driven more by the need to be seen as opposing Trump than actually looking out for the welfare of the people.

The Supreme Court has become a battleground in this fight, with Democrats fearing that a 6-3 conservative majority will not only sink long-standing liberal causes such as abortion rights and Obamacare, but could also help sway the November 3 Presidential election in Trump’s favor.

Trump’s defense of Constitutional processes has helped fuel the absurdity of a Democratic “Constitutional” response in the form of Nancy Pelosi’s bizarre bid to invoke the 25th Amendment, which governs the conditions and terms under which a sitting President can be replaced, by creating a standing committee that would examine the President’s fitness to rule.

Pelosi’s bid stands no chance of becoming law—the Republican-controlled Senate will make sure of that. But just as was the case with the Democratic impeachment of the President, Pelosi’s objective is to attack the credibility and viability of Trump’s authority. Herein lies the rub—with the President and Pelosi on the opposite ends of a Constitutional struggle about the legitimacy of his tenure, the upcoming election has taken on a tone of “us versus them” that makes the Michigan kerfuffle pale in comparison.

Let there be no doubt—the US is on the verge of a crisis that will test it like no other in modern times. Both sides have staked out positions ostensibly founded on the basis of Constitutional law, and as such both sides can—and will—claim that the election is a matter of survival for the US. By defining the outcome in such a manner, both sides have created the condition where neither can accept anything other than victory. There will be no peaceful transfer of power.

Unfortunately, this means that this election will likely be decided in the courts. And while that legal battle rages, the extreme partisans from each side will take to the streets. There will be blood, and there is little either side can do to prevent it, because both sides are equally to blame in creating the underlying circumstances that sustains the militant partisanship that defines the American body politic today.

Trump vs. The Establishment: Who Will Win?

0 thoughts on “America on cusp of a Civil War: No matter who wins the election, there will be no peaceful transfer of power”