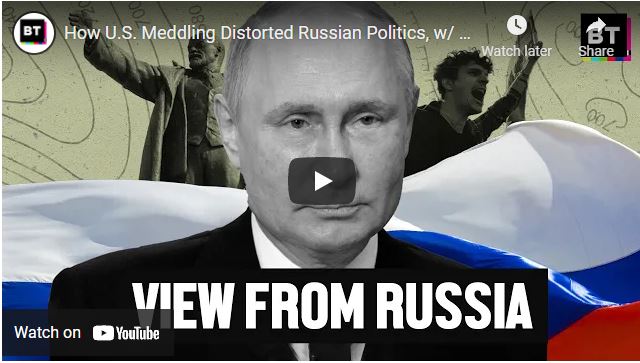 In the American mind, Russia is associated with the Soviet Union — the red menace — and long standing Russophobia clearly echoes in the coverage of Putin today. The Communist Party of the Russian Federation (KPRF) officially received 19 percent of the vote, but the KPRF claims their vote totals were suppressed. What explains the recent election results, does Putin remain popular, and how does American interference influence Russian politics?

Rania Khalek was joined by Russian leftist, journalist and activist Alexey Sakhnin, whose work has appeared at Jacobin and New Left Review.

0:00 Intro
1:01 Elections and how the West sabotaged Russia’s ‘democracy’ from the outset
10:19 Is there robust public debate in Russia? Actually, yes.’
13:30 How Russia learned some of its worst tendencies from the U.S.
15:18 Is Putin popular? Who is his base?
20:56 The U.S.-backed psychological and social trauma of the 1990s
21:38 The benefits of Soviet socialism erased by neoliberalism
27:26 Why U.S.-style “democracy” and “liberalism” have a bad rap in Russia
29:07 Putin’s symbolic compromise
35:27 Alexei Navalny: From right-wing nationalist to liberal hero?
48:47 The U.S. wants a weak Putin and backs anti-democratic civil society groups
55:24 Conflict in Ukraine: Western imperialists started it, supporting a coup, fascists & Nazis
1:03:49 Why the uprising in Belarus failed
1:20:17 Russia’s COVID policy and the missteps that led to vaccine hesitancy
1:31:03 Alexey Sakhin’s view of the Communist Party of the Russian Federation today