HOME / Multimedia / All Out War on Palestine 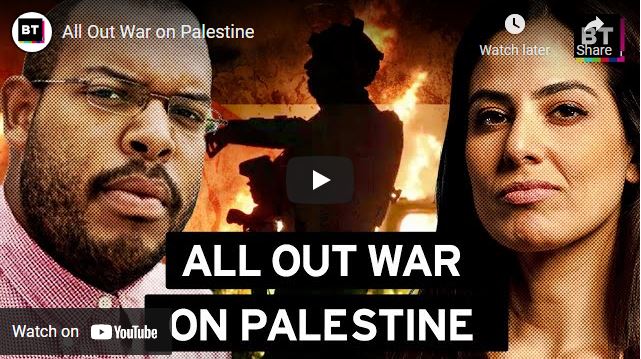 Ongoing Israeli airstrikes have reportedly killed 20 people so far in Gaza, nine of them children. So far, one Israeli citizen has been killed by Hamas rocket fire. This latest escalation follows Israeli forces storming the Al-Aqsa Mosque compound on Monday for a third consecutive day, firing rubber-coated steel bullets and setting off stun grenades and tear gas. Palestinian worshippers had gathered inside in the final days of the holy month of Ramadan.

“Even people like Elizabeth Warren when they warn Israel, they’ll talk about demographics. They will literally say Israel is facing a demographic threat. When they say demographic threat, that is a euphemism for too many Palestinian babies.”@RaniaKhalek

“Liberal Zionists want it both ways. They want Israel to exist as a Jewish majority state while pretending that can happen without the occupation. You can’t have pretty zionism. It is hideous because it’s ethnic and religious nationalism.”@RaniaKhalek

“Israel has a formula to come up with the amount of calories that Palestinians in Gaza need to not starve to death. They call it putting Palestinians on ‘the diet.’ That is how they base how much food they allow in Gaza. “@RaniaKhalek

“AIPAC, one of the most powerful Israel lobbies in D.C. among others has huge sway among Congress as well as the White House – they can literally write any bill and get the majority of Congress to sign on to it. They don’t even read it.”@RaniaKhalek

“The media bias about Palestine is outrageous. Everything is called clashes even when it’s just Israelis shooting. Somehow the headline is always written to promote the ideas that Palestinians did something to provoke it.”@RaniaKhalek

“At the Al-Aqsa Mosque – far-right Israeli religious Jewish extremists who have this crazy apocalyptic ideology – they want to demolish the Al-Aqusa mosque and built on top of it a third jewish temple basically to bring out the end times. “@RaniaKhalek

“In 2014 when Israel wiped out over 50 Palestinian families because they were bombing entire homes that had multigenerational families lived in them. Do you even know 50 families? Can you think of 50 families off the top of your head?”@RaniaKhalek

“Basically the Biden administration is saying that Israel has the right in ‘self-defense’ to bomb Palestinian children and kill them, to shoot at Palestinians with guns and tanks. Palestinians have to just submit and die silently.”@RaniaKhalek

“In one case, the kinds of people Palestinians will be replaced with will be Americans. It’s blatant settler colonialism.”@RaniaKhalek

0 thoughts on “All Out War on Palestine”