HOME / WORLD / The ‘Missile Intifada’ Brings an Era Crashing Down 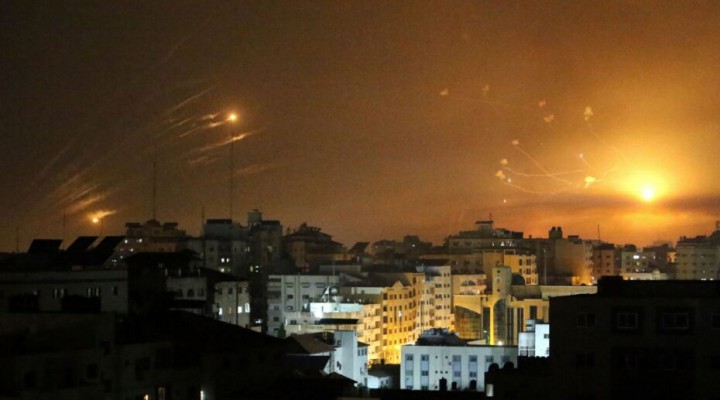 As Gaza quietens for now, the next phase to this war likely will centre around Al-Aqsa, Jerusalem and the 1948 Palestinian communities within Israel.

The acclaimed novel Birdsong tells a story from inside the gruelling trench warfare of 1914-18. The trenches – mere mud, and rain-soaked corridors – were separated from the German lines, by the desolate hell of ‘no man’s land’ – an indescribable flat wilderness of mud, mud and more mud, littered with broken bits of what once were men, whose remains no one dared retrieve, and the surreal black art of coiled razor wire twisted out into every imaginable shape and angle.

Across this Hieronymus Bosch landscape, the Germans laid down rolling wave after wave of intense high explosive artillery shells sending plumes of earth high up into the sky. Yet, in counterpoint to this dark and demonic backdrop, Birdsong unfolds a story of human struggle, near death and deep compassion for injured fiends. But at the core, it is a story about tunnels – those who dug them; those buried in them, as they fell in; and those who sprung out from them – as earth-worms rising – to surprise and kill the enemy.

Tunnels were the secret weapon of WW1. They was the answer to the merciless aerial bombardment unleashed by the crushing mass of a superior military machine. Battalions would enter the trenches 800 strong, and emerge after the barrage, with a mere 100-200 living men. Yet on they went – volunteers digging tunnels through the mud to rise, like ghosts, upon a sleeping enemy.

The western doctrine of overwhelming fire-power was born there. In the next war (WWII), it was all about the (indiscriminate) bombing of civilian populations (in Germany and Japan) to break – psychologically – their will to fight. This approach dug in. It became the principal tool in the western tool box. Churchill used airborne firepower in the Middle East between the wars, and absolute air superiority remains the inner heart to current U.S. and NATO strategy.

What is the point here? It is that this whole ark of military strategy rooted in massive aerial bombardment – reaching back to the 1920s, and pushing forward until today in Gaza, is expiring. It has become obsolescent (at least in the Middle East), just as did trench warfare in the wake of 1918.

Tunnels (now, much more sophisticated ones), have gained renewed life as the answer to massive aerial bombardment on civilian terrain as a prime psychological tool of war. They mark the end of a strategy. Swarm missiles, and smart drone clusters are today’s inflection points: the ‘new’ warfare – just as much a game-changer as was the advent of the longbow (in the 1300s). They have become, as it were, somehow Hamas’, Hizbullah’s, the Houthi’s and Iran’s ‘alt’ Air force.

It is clear that the Hamas rocket barrage took Israel (and Washington) by surprise. t may not have sunk in fully, but the Israeli-Palestinian conflict will never be the same again. Why?

To be very clear, what has happened is firstly, that just as WWI troops found a partial response to the rolling German artillery bombardments of their positions through their shallow, collapse-prone tunnels, so Iran, Hizbullah, the Iraqi resistance and the Houthis have upgraded the strategy to deep (30 meter), fortified underground positions – effectively to emasculate Israel’s Air Power – and, if anything, to turn the Israeli air power in-on-itself , damaging Israel’s image, whilst burnishing that of the Palestinians.

Secondly, Israel’s onslaught in Gaza, killing 230 Palestinians, including 65 children precisely has turned the outside world against it. And, for the first time, there is a serious debate in the U.S. about support for Israel’s entrenched system of control over the Palestinian territories, and its creeping annexation of Palestinian lands – unchecked for years by an acquiescent United States.

But why should this time different from previous episodes? What has changed? In a word: the woke revolution – a “new Democratic normal”. With America and parts of Europe now viewing their own histories of settlement, ethnic cleansing and colonialism as toxic aberrations that should be redeemed, it has become possible to say things today in the U.S. about Israel long thought, but held hitherto in pectore; that earlier would have brought heaven and earth crashing down upon the career of anyone uttering them. No more.

Thirdly, a growing number of politicians who staked their careers on building the Oslo two-state solution, finally are coming to acknowledge that the facts on the ground make Oslo a fantasy. “The Oslo framework is done, it’s over,” said Marwan Muasher, a former Jordanian diplomat and politician who played a lead role in the Arab Peace Initiative two decades ago: “I’m a two-stater by training. I’m a one-stater by reality”.

The key pillars to Oslo have been seen as chimaera: That demography alone would compel Israel to implement a two states outcome; that Palestinian security co-operation would assuage Israeli hesitations to endorse a Palestinian state; and thirdly that a Palestinian state would bring an end to occupation. All these key assumptions have proved false.

The U.S. and the Europeans however have no idea what to do about the situation, beyond calling for a return to ‘normality’ – one that permits Israelis ‘to return to the beach’, and the Palestinians ‘to their cage’, as one commentator, caustically remarked about the meaning of ‘normal’.

Possibly, the western daze about what to do goes someway to explaining their surprise at the Gaza events. Whilst the West looked for its liberal, secular solution, Iran, Hamas and Hizbullah quietly were forging a quite different response – one that would change the whole paradigm. In practice, the 2006 Lebanon war was a ‘dress rehearsal’. It marked the ‘end of the beginning’ of this new mode of swarm drone and missile warfare; and this latest Gaza war (together with the more sophisticated, smart missiles and drones now surrounding Israel) represents its coming into maturity. It is a concerted, closely co-ordinated move. Hamas though, preferred to make its Gaza début a wholly Palestinian move.

In 2006, Israel was also taken by surprise. Amos Harel recalls that anyone present in the room when “Dan Halutz, the proud IDF chief of staff at the beginning of the Second Lebanon War, will never forget his briefing to the press on the eve of Friday, July 14, 2006. Halutz ticked off the list of the IDF’s achievements, headed by a massive hit on the Hezbollah mid-range missile system (the details of which were minimal at the time). He was attempting to convince the reporters that the army had reacted suitably to the abduction of two reserve soldiers two days earlier. All of a sudden, a note was brought to him with news of the [Hizbullah cruise missile] hit on the Israeli navy missile ship INS Hanit opposite the shores of Beirut. In a war, surprises aren’t only chalked up in one direction.”

In fact, the IDF in 2006 were bombing a feint. Hizbullah had built those tunnels to fool the IDF. They leaked false intelligence that Israel absorbed. The real missile silos were safe and intact – and the missile volleys continued for nearly a month. Is it probable that Hizbullah passed on such strategic advice to Hamas? Of course they did.

Today, it is a similar story. Israel is spinning victory (rooted in its destruction of Hamas tunnels), yet facing failure – as in 2006. Credible reports suggest that the IDF strategy hinged on its confidence that they had mapped the Gaza tunnels. So that when the army deliberately launched the rumour of an impending Gaza ground invasion, they calculated that the Hamas leadership immediately would take to the tunnels, which the Israeli Air Force would then bomb, thus burying the movement alive. Only it didn’t happen – Hamas’ leadership were not in those tunnels, and the missiles did not cease.

Aluf Benn sums it up, in Haaretz (where he is editor-in-chief):

“You can feed the public with news broadcasts arrogantly talking about “the painful blows we’ve delivered to Hamas” and showcase the pilot who killed an Islamic Jihad commander – while forgetting that this was an advanced fighter jet with precision armaments attacking an apartment building – as a modern-day version of Judah the Maccabee or Meir Har-Zion. But all these layers of makeup can’t cover up the truth: The military has no idea how to paralyze Hamas’ forces and throw it off balance. Destroying its tunnels with powerful bombs revealed Israel’s strategic capabilities without causing any substantive damage to the enemy’s fighting abilities.

Assuming 100, 200 or even 300 fighters were killed, would this bring down Hamas rule? Or its command and control systems? Or its ability to fire rockets at Israel? The shrinking number of quality targets is evident in the growing number of civilian casualties as the campaign has continued…”.

Well, there was one Israeli contrarian who was not locked into the prevailing mindset: “The sharpest critic of the army brass in recent years, warned that the next war would be fought on the home front – [and] that Israel had no answer to attacks involving thousands of missiles – and which its land forces aren’t able to fight”. That was Maj. Gen. Yitzhak Brik’s warning, but as so often with contrarians, he was ostracised and ignored.

The long ark of the strategy of bombing civilian terrains (justified by saying that terrorists are hiding there), may be reaching its ‘sell-by’ date, as Human Rights become the touchstone of foreign policy (as well as commanding domestic U.S. policy).

This carries implications for the U.S. and NATO, as much as for Israel. Would the NATO bombing of Belgrade with full impunity for 78 days be feasible again in today’s ‘values’ climate?

A ceasefire has been ‘agreed’ (though, as what often occurs with Egyptian ‘mediation’, the parties already dispute what purportedly was agreed between them). A ceasefire may mark a pause in the Gaza battle, but by no means the end to a war.

The last reason why the Israeli-Palestinian conflict will not be same again is that the collective eruption across historical Palestine has unified and mobilised the Palestinian people – under Hamas’ military leadership. The latter are perceived as the only force capable of protecting Al-Aqsa mosque – threatened by settler attempts to seize it; or burn it – a real threat with the potential to inflame Muslims across the globe.

As Gaza quietens for now, the next phase to this war likely will centre around Al-Aqsa, Jerusalem and the 1948 Palestinian communities within Israel. Israelis face a new reality: Hamas is not ‘over there’, but is everywhere around them; and furthermore, they also know that the possibility of the (likely) coming Right-wing coalition in Israel acquiescing to this new paradigm is zero.

0 thoughts on “The ‘Missile Intifada’ Brings an Era Crashing Down”