HOME / WORLD / The PA has decades of diplomatic failures behind it 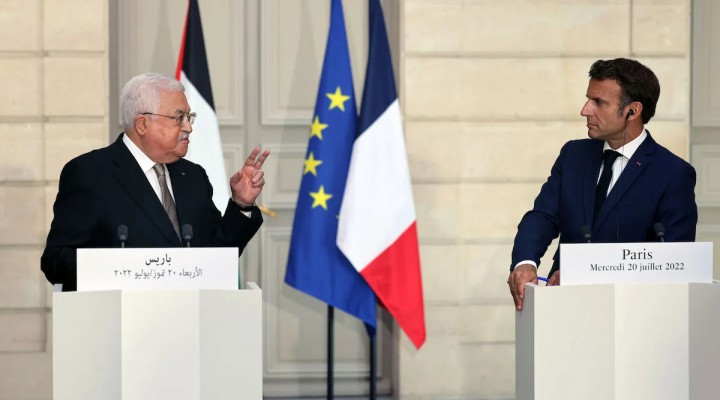 The Palestinian Authority is spending considerable time informing the US of its ambivalence towards Washington’s foreign policy. From blind faith, to trust, to a sense of urgency because diplomatic rhetoric remains unaccounted for, PA leader Mahmoud Abbas has long hit a dead end built out of his own collaboration.

Mere days after US President Joe Biden’s condescending address during his visit to the occupied West Bank, Abbas met with French President Emmanuel Macron in Paris. He came up with nothing but a check list of what the PA has committed to and what the EU should do; and expressed “gratitude to the EU and Member States for their important and persistent role in the creation of stability and peace and in improving the economic conditions of the Palestinian people.” With such a sweeping approach that leaves no room for any Palestinian negotiation of terms, Abbas has well and truly condemned his people to additional suffering in the name of financial donations and humanitarian aid. And what “stability and peace” was he referring to? Try telling that to the people of Jenin; to the family of Shireen Abu Akleh; and to the families facing eviction from their homes in occupied Jerusalem.

It is incredible that PA leaders waste time and money simply in order to accumulate repetitive statements about insincere commitment to Palestinian rights. The already mythical “political horizon” so favoured by PA leaders since Israeli Defence Minister Benny Gantz made some concessions to the PA is now a staple part of official statements. Macron mentioned it twice: “We will work with all parties to open a credible political horizon, and we are ready to resume this process and mobilise the international community to find a solution that will lead to a just and lasting peace,” he said during a joint press conference with Abbas.

The credibility of the political horizon should not be in doubt. “We know that this situation has been going on for several decades,” the French president pointed out, “and for my part, I think that there is a political horizon, and we must seize every opportunity in order to find the ability to progress.” He knows full well, of course, that no such horizon exists, and never has. Unless, that is, he can find one amongst the destruction caused by the colonial apartheid system. That would suit Israel down to the ground which it is stealing from the Palestinians on a daily basis.

Macron’s focus was on extending the humanitarian paradigm within the context of the defunct two-state compromise. Not unlike Biden, whose focus on improving health care through USAID programmes, ensuring food security and ostensibly Palestinian economic growth, this is eclipsing the urgency of addressing the decades-long repercussions of settler-colonialism and international collaboration by making the Palestinian population entirely dependent upon aid. It is inhumane to turn legitimate Palestinian human and political rights into a humanitarian project merely because it is more palatable to the international community than standing up to the colonial enterprise which the UN helped to create and sustain.

Although Israel would much rather deflect attention away from its colonial structure to avoid harming its public relations machine, it does not make a secret out of its colonial land grab. Given that Israel is blatantly open about its aims and objectives — the occupation of all of historic Palestine — the international community should be equally adamant about decolonisation, as should the PA. However, when colonialism is expressed by a euphemism such as “deep, political reasons” by the likes of Macron, then Abbas would have done better to stop his useless accolades and pleas, and address instead the decades-long list of the PA’s diplomatic failures.