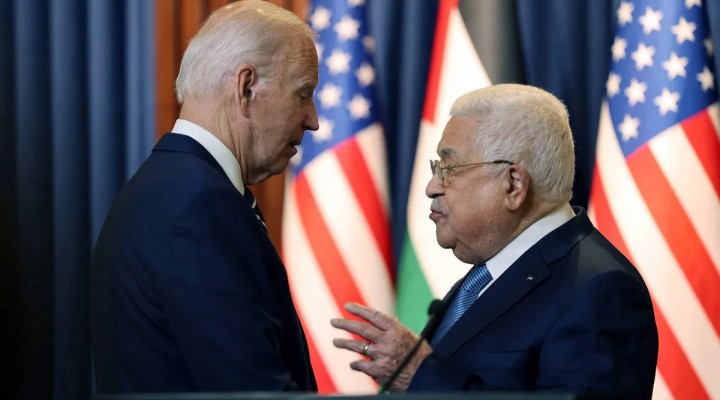 Palestinian Authority leader Mahmoud Abbas’s bleating during US President Joe Biden’s visit to Israel and the occupied West Bank has of course achieved nothing apart from entrenching his subjugation to Israeli colonialism. “Our confidence in you and your administration is very great,” Abbas told Biden. “And we assure you of our readiness to work with you, hand in hand, in order to achieve comprehensive and just peace based on international legitimacy and the Arab Peace Initiative and the signed agreements between us and Israel.”

In turn, Biden might have been playing upon PA officials’ meagre requests when he said that, “There must be a political horizon that the Palestinian people can actually see or at least feel. We can’t allow the hopelessness to steal away the future that so many have worked toward for so long.”

If the future has already been defined by the 1947 UN Partition Plan, what future is Biden talking about? The constant barrage of nonsensical talk that promises Palestinians nothing in terms of politics and rights needs to stop. If the PA was truly representative of Palestine and the Palestinian people, it would have found ways to at least counter Biden’s address.

Echoing Israel’s perpetual laments, the US president said that, “The ground is not ripe at this moment to restart negotiations.” Referring to the Abraham Accords, he declared, “We can harness that same momentum to reinvigorate the peace process between the Palestinian people and the Israelis.”

No one believes Biden, of course, not even Abbas. But what better way for the PA to exist on borrowed time than to laud the perpetrator of the colonial land grab and its international accomplice?

“The best way to feed the flame of hope is to demonstrate that things can be better,” Biden told Abbas, while reminding him that his administration has resumed humanitarian aid to the Palestinians. Ask the Palestinian people if the flame of hope in US-PA rhetoric means anything other than capitulation to colonial demands. For months, they have been saying that the economic dependence upon international actors is diminishing all prospects of political autonomy.

Of much greater consequence was Biden’s reiteration that Jerusalem is Israel’s capital, affirming once again that his administration is operating under the legacy of his predecessor, Donald Trump. The PA is unwilling to discuss or even acknowledge the fact that despite Biden’s purported adherence to the two-state compromise, the Abraham Accords are taking precedence; not just for the Biden administration, but also within the international community.

If the two-state negotiations, futile though they will certainly be, are now being likened to the Abraham Accords, it means that there is even a shift in what a hypothetical two-state “solution” actually looks like. Of course, the disseminated version will remain that of two states for two peoples, assuming a non-existent equality. But if the Abraham Accords are determining the façade and farce of any negotiations, the PA would do well to think about how it is endorsing a status quo that has altered drastically from a defunct paradigm to one that can be manipulated to suit the current apartheid interests of the Zionist, settler-colonial state.

Abbas is endorsing an altered status quo after Biden's visit