HOME / WORLD / Whoopi Gets a Whipping 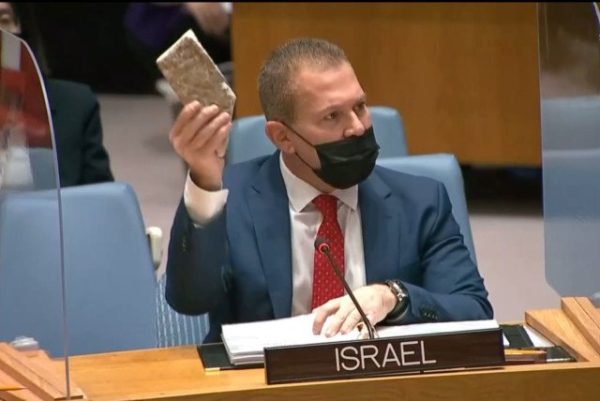 French eighteenth century journalist and propagandist Jacques Mallet du Pan coined the adage that “A l’exemple de Saturne, la révolution dévore ses enfants,” frequently translated as “Like Saturn, the Revolution devours its own children.” Saturn was a Greek and Roman god who famously was depicted as eating his own children, though the attribution was more metaphorical than descriptive. A Royalist, Mallet was referring to how the French Revolution morphed into the Terror, which led to many former revolutionaries running afoul of the new normal and winding up on the guillotine. The expression also calls to mind the similar bloodletting that followed on the Russian Revolution and the dissolution of the Ottoman Empire after the First World War.

A friend of mine used the phrase recently, somewhat light heartedly, in reference to the recent defenestration of black celebrity Whoopi Goldberg for her having referred to the so-called holocaust in a way that was not deemed to be adequately reverential by the Jewish power brokers who increasingly have their way in the United States and Europe. Specifically, Goldberg, who is no critic of Jews or Israel and is as willing to submit to proskynesis before Zionist force majeure as anyone in the entertainment industry, said “Let’s be truthful, the Holocaust isn’t about race, it’s not. It’s about man’s inhumanity to man, that’s what it’s about. These are two groups of white people.”

Whoopi was immediately attacked by a host of the usual suspects, including both the US Holocaust Museum and also the always vigilant “Fighting Hate” Anti-Defamation League (ADL), whose CEO Jonathan Greenblatt intoned how “The Holocaust was about the Nazi’s systemic annihilation of the Jewish people — who they deemed to be an inferior race. They dehumanized them and used their racist propaganda to justify slaughtering 6 million Jews. Holocaust distortion is dangerous.” And Greenblatt certainly knows what he is speaking of when he refers to “racist propaganda” as he has dished out plenty of it in defense of Israel’s war crimes and crimes against humanity. He recently told Congress that anyone who accuses Israel of genocide is equivalent to a terrorist and should be denied any US government employment.

Confronted with such a heavy dose of Zionist rage poor Whoopi was forced to recant several times, saying that “So yesterday on our show, I misspoke. I said that the holocaust wasn’t about race and it was instead about man’s inhumanity to man. But it is indeed about race, because Hitler and the Nazis considered the Jews to be an inferior race. Now, words matter and mine are no exception. I regret my comments as I said and I stand corrected. I also stand with the Jewish people, as they know, and as you all know because I’ve always done that.”

Goldberg (not her real name, by the way) was further punished by being suspended for two weeks from her gig on ABC television’s daily dose of midday inanity The View. ABC News’s president Kim Godwin, who is also black, said that “Effective immediately, I am suspending Whoopi Goldberg…for her wrong and hurtful comments. While Whoopi has apologized, I’ve asked her to take time to reflect and learn about the impact of her comments. The entire ABC News organization stands in solidarity with our Jewish colleagues, friends, family and communities.” Greenblatt also wouldn’t let go of the story, recommending that The View hire a Jewish co-host to balance Whoopi.

If proof were needed that we are in an age of “newspeak” and “thought crimes” when it comes to anything Jewish related that might even vaguely be considered non-adorational or evasive, Whoopi would be a prime bit of evidence. We are, quite frankly, unable to exercise freedom of speech when saying or writing anything at all that might even be misinterpreted about Jews and Israel. I previously reported about a similar rebuke experienced by Senator Marco Rubio of Florida, who was on the receiving end of the characteristic acute hypersensitivity of defenders of Israel and/or Jewishness. Little Marco denounced “upscale liberals who control the media” in a tweet and was immediately attacked for “the anti-Semitic trope that Jews control the media,” which of course they do, but an ardently pro-Israel Rubio surely was not suggesting anything like that. So, one must conclude it is not even safe for a conservative Israelphile to mention the “liberal media” for fear of being labeled as guilty of “coded anti-Semitism.”

And then there is the woman that some people find funny or entertaining, Sarah Silverman. Silverman has been on a roll complaining about the paucity of “Jewfaces” displayed playing obviously Jewish characters on television or in movies. She has apparently not checked out the Joe “I am a Zionist” Biden cabinet, where she would find plenty of Jewfaces in all the top positions, but be that as it may, she is particularly incensed that a non-Jewish woman Helen Mirren is playing Golda Meir in an upcoming movie. Silverman is enraged that anyone but a Jew should be cast in roles “in which Jewishness is an inherent and substantive component.” For her, apparently, the last straw was the recent casting Roman Catholic Kathryn Hahn to play the obnoxious Jewish comedian Joan Rivers in a TV series. Ironically, Jews have always pushed hard against frequently open doors to create more opportunities for them, but it doesn’t apply to goyim. Hilariously, Silverman and other entertainment business Jews are now complaining about anti-Semitism in the casting by Hollywood studios, an industry that has been dominated and run by Jews since its inception.

In what has happened to Whoopi and Marco, plus the bizarre demands of Silverman, one would not be exaggerating to observe that what we are seeing in America are the first steps leading to the death of the freedom to dissent, the most fundamental liberty of all. To be sure the overwhelming Jewish and Israeli overreaction to comments that are not intended to be negative is in part due to the fact that the tide has finally turned on Israel’s carefully cultivated and protected public image and the “perpetual victims” are thrashing around wildly. Israeli diplomats recently have been so desperate for affirmation of their suffering that they have produced in a United Nations session an alleged Palestinian “terror rock,” presumably the weapon of choice used by protesting Arab teenagers against heavily armed Israeli soldiers.

Against all that, last Monday the highly respected human rights organization Amnesty International issued a 278 page report entitled Israel’s Apartheid Against Palestinians: Cruel System of Domination and Crime Against Humanity utterly condemning Israeli behavior vis-à-vis the Palestinians. Per Amnesty, Israel has maintained its absolute control over non-consenting Palestinians going all the way back to its establishment of the state in 1948. Israeli reality comfortably meets the international legal definition of apartheid, which is “an institutionalized regime of systematic oppression and domination by one racial group over any other racial group.” Amnesty also called on the international community to pressure Israel to cease its human rights violations. Predictably, members of the Biden Administration and numerous politician gasbags immediately unloaded on the report, with Senator Robert Menendez of New Jersey leading the charge. Menendez is likely the most corrupt and amoral member of the US Congress, which is saying a lot, but is outspoken regarding his love of Israel which has kept him safe and given him the Chair of the powerful Foreign Relations Committee. Menendez is currently also engaged in pressuring Joe Biden not to come to any agreement with Iran over its nuclear program, which strangely enough happens to be the Israeli government position and is contrary to actual US interests.

The hysterical Israeli and US Lobby/media response to the Amnesty Report has also been predictable: that the report is “steeped in anti-Semitism.” The New York Times, America’s self-proclaimed “newspaper of record,” did not even bother to report the story. In any event, we Americans are in deep kimchi when a tiny percentage of our country’s citizenry can dictate limits for what it is possible to say or write regarding disputed historical events and a foreign country. The European Jewish Congress is, for example, currently demanding that the US-based publishing house HarperCollins cease publication of a well-documented book it argues contains an “incendiary claim” that it was actually a local Jewish notary who revealed to the occupying Germans the attic where Anne Frank and her family, as well as other Jews, were hiding in Amsterdam in 1944.

Taken in context, the attacks on what Goldberg and Rubio said are utterly mindless and have produced the usual calls to teach more about the approved narrative of the holocaust to “educate” Americans on the issue. But the more important message is that Jewish power is such in the United States and Europe that it believes it is invincible and that by shouting holocaust and anti-Semitism one can shut down any and all criticism. The trick has been successful up until now due to control over the media and the politicians, but nothing lasts forever, does it?

The Latest Spy Story: Was It Involving Israel Yet Again?

0 thoughts on “Whoopi Gets a Whipping”