HOME / WORLD / For the PA, clinging onto the dead and buried two-state solution is a matter of life 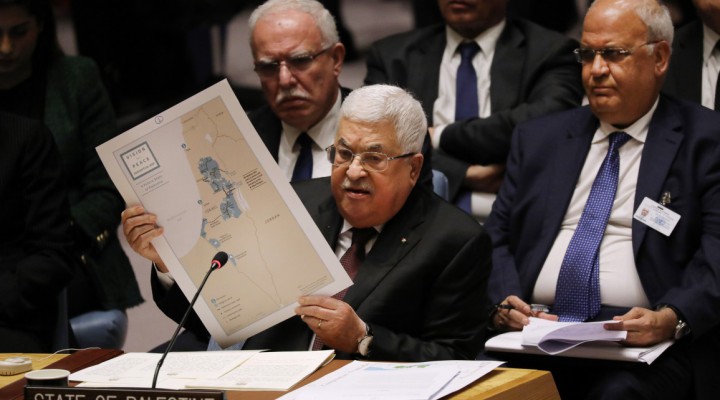 Despite no realistic prospects for a two-state solution and growing support for a single unified state, the Palestinian Authority clings to this paradigm because any other political resolution threatens to render it irrelevant.

The Palestinian Authority (PA) is desperately clinging to the paradigm of a two-state solution, declared obsolete years ago by the Middle East Quartet, as attention has almost completely shifted from the marginalised Palestinian people to saving the floundering hierarchy in Ramallah.

No matter how unrealistic it is to implement this paradigm given Israel’s ongoing expansion plans and construction, the PA clings to it for dear life, as it is the only framework that prevents it from a complete collapse. Even the most recent report to the UN Security Council by the Special Coordinator for the Middle East Peace Process Tor Wennesland is now linking the two-state paradigm with political stability in Palestine.

“Without a realistic prospect of an end to the occupation and the realisation of a two-State solution based on UN resolutions, international law and previous agreements, it is only a matter of time before we face an irreversible, dangerous collapse and widespread instability,” Wennesland’s report partly reads.

But the prelude to the statement pertains solely to how weak the PA has become, and how important it is “to ensure the PA’s continued ability to function effectively, while boosting donor confidence and support.”

“No matter how unrealistic it is to implement this paradigm given Israel’s ongoing expansion plans and construction, the PA clings to it for dear life, as it is the only framework that prevents it from a complete collapse”

Meanwhile, the PA’s Foreign Minister Riad al-Maliki, who is fond of lamenting on how Palestinians have been forced into “waiting” but never speaks about the PA facilitates Israel’s colonial expansion, took issue with US President Joe Biden for moving too slowly in Palestine’s favour.

There was never any doubt as to the US position – it is strategically committed to Israel and the PA would have done well to remember that Trump’s overt policies were based upon decades of earlier manoeuvring.

A change in the US presidency does not equate to a change in policy, and Biden has proved that, despite his adherence to the two-state compromise which brought the US back to the fold of international consensus.

However, Biden knows, as do the PA and the rest of the world, that Trump’s “deal of the century” informs current US policy without contradicting the two-state diplomacy, because both are heavily invested in the Palestinian people remaining dependent upon humanitarian programmes.

“The Palestinian people will survive, but the two-state solution may not,” al-Maliki told the UN Security Council. “What happens then? Will you convert to advocates of the one-state solution of freedom and equal rights for all between the river and the sea? These would be the only options then” he warned.

The PA has long positioned itself as an advocate for the international community’s designations on Palestine. To hear al-Maliki promoting the UN Secretary General Antonio Guterres’s catchphrase, “There is no Plan B” in a more verbose attempt at scaremongering, therefore, is hardly surprising.

There is growing support among Palestinians for a single decolonised and democratic state with equal rights for all – anathema, it seems, to the PA and the international community – for the simple reason that colonial expansion and illusory state-building are the preferred options for Israel’s accomplices. Neither the UN nor the PA are advocates of decolonisation or a single democratic state because the concepts threaten their tacit consent for Israel’s colonial expansion.

Hence, al-Maliki is just advocating for the international community to save its diplomacy and let the Palestinians become collateral damage. According to al-Maliki, the Palestinian people will survive without a political framework.

For the PA to suggest so blatantly that saving the two-state compromise should take precedence over a framework that protects the Palestinian rights is the most debasing suggestion yet to emanate from a PA official.

The two-state is already defunct and the PA is calling to protect its relics, irrespective of how the paradigm paved the way for Israel’s colonial expansion. Al-Maliki has given the impression that Palestinians are not demanding a political solution and do not need one, when the truth is that the PA is averse to a solution that would strip away its power.

Of course, the UN provides the ultimate platform for the PA to plead for extending its existence. Palestine has long been defined through countless non-binding resolutions and not through the Palestinian experience, which has been rendered irrelevant to political rights but not to the humanitarian paradigm.

There is also no question that both the PA and the UN are not averse to Palestinian “survival” – their diplomacy becomes meaningless without a depoliticised, dehumanised and deprived population. But the fact remains that Palestinians should not be coerced into providing their oppressors with political relevance.

“The pressing concern for the PA is how long before the obsolete two-state paradigm is rendered completely useless even in diplomatic circles, because once the two-state rhetoric is buried, the PA can spell its own demise”

On the contrary, Palestinians need a fair platform to articulate their relevance and the UN is not offering that most basic of rights, given that only PA officials are active participants in international debate.

The PA’s threat over the single democratic state, therefore, is not directed at the international community but at the Palestinian people. Without the two-state paradigm, Palestinians would regain a sliver of their freedom back, because the perfidy of there not being an alternative would no longer exist.

Last year, the PA faced its biggest threat ever from the Palestinian people, to which the US in particular scrambled to minimise the damages and protect the corrupt status quo.

Al-Maliki’s concern is not about Biden’s loyalties, or Palestinian losses incurred as a result of a favourable US foreign policy for Israel. Rather, the pressing concern for the PA is how long before the obsolete two-state paradigm is rendered completely useless even in diplomatic circles, because once the two-state rhetoric is buried, the PA can spell its own demise.

0 thoughts on “For the PA, clinging onto the dead and buried two-state solution is a matter of life”