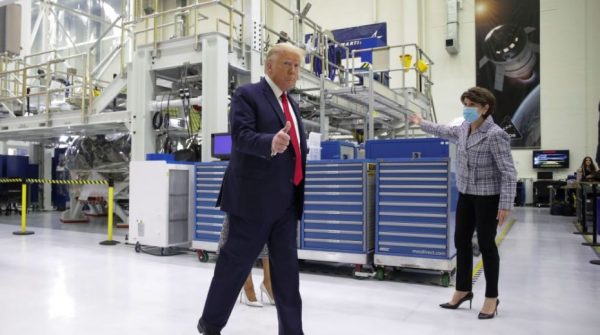 Trump and his advisers are opposed to any international bodies on principle, most particularly if they are not completely supportive of U.S. policies

Let us consider why the Donald Trump White House is currently considering detonating a nuclear weapon. It would be the first “test” of a nuke since 1992 and is clearly intended to send a message that those weapons sitting around in storage will be available for use. The testing is in response to alleged development of low-yield tactical nuclear devices by Beijing and Moscow, a claim that is unsupported by any evidence and which is likely a contrivance designed to suggest that there is strong leadership coming out of Washington at a time when the Administration has been faulted for its multiple failures in combatting the coronavirus.

The Pentagon and national security agencies directed by the White House have also been discussing the viability of engaging in war with those same two global competitors Russia and China, either individually or even simultaneously. Yes, it is true that many countries wargame certain scenarios that are unlikely ever to occur, but there is nevertheless a certain consistency in the bellicosity that comes like an endless stream out of the Trump White House.

Relations with both Moscow and Beijing are the worst they have been since the end of the Cold War. A recent interview with U.S. Special Representative for Syria James Jeffrey revealed that American troops are staying in Syria not to confront ISIS but rather in hopes that Russia will be drawn into a “quagmire.” Meanwhile the U.S. government’s repeated attempts to demonize China for the coronavirus suggest that tension with that country will increase considerably as U.S. elections draw nearer. Both China and Russia have already been accused of planning to interfere in November’s presidential polling.

The Administration policy of intimidation and threats directed against foreign nations over their domestic and international policies has borne bitter fruit, but no one seems capable of halting the slide led by Secretary of State Pompeo and the president into an autocracy that depends on expressions and demonstrations of military power for its survival. Washington recently rejected global calls to suspend all sanctions and aggressive actions while the world struggles with coronavirus. It was the only country to do so, leading to derision from friend and foe alike and emphasizing the isolation of the Trump leadership on the world stage.

Recently the United States was threatening to intercept four Iranian flagged oil tankers that were making their way to Venezuela. The U.S., which has waged economic warfare against both countries by sanctioning oil exports and seriously degrading the standards of living of ordinary citizens, is now seeking to use military resources to enforce its completely illegal rules globally. If Trump wants to light a fire, attacking Iranian ships in international waters to enforce U.S. unilaterally imposed sanctions is a sure way to go about it. Starving Iranians and Venezuelans is in no one’s interest, not even the poohbahs who are in charge in Washington, but they seem to be oblivious to the fact that taking “action” has consequences.

The irony is, of course, that Donald Trump was elected president on a “peace candidate” margin of difference after he pledged that he would be ending “stupid” wars in Asia. Unfortunately, his assurances were little more than copies of the similar pledges made by his two predecessors, both of whom embraced business as usual for America the Exceptional early in their terms of office. Electing three faux peace candidates in a row also revealed that while you cannot fool all the people all the time you can fool most of them frequently enough to wind up in Washington.

And there is other cleverness afoot in an effort to make COVID-19 go away. Pompeo has just announced that the United States will unilaterally withdraw from the so-called Open Skies Treaty which was signed in 1992. Thirty-two signatories were, by its terms, allowed to conduct unarmed confidence building surveillance flights over each others’ territories to ensure that no one was planning a military offensive.

It is the third international security arrangement that Trump has discarded since he took office and the pretext, as in the previous cases, is that the other side is “cheating,” that Russia in particular has blocked overflights of strategic regions and military exercises while also using its flights to collect sensitive information on the United States to plan potential attacks.

America’s NATO allies, also signatories on the treaty, were not informed in advance regarding the White House’s intentions and are reported to be angry because they have found the Treaty a useful tool in maintaining mutually beneficial relations with Russia. Some Democrats and former intelligence official in the U.S. have declared the decision “insane”, both because it ignores the interests of America’s closest allies and because it further damages the prospect for establishing a reasonable modus vivendi with Moscow.

Previously Trump withdrew from the Iran nuclear deal Joint Comprehensive Plan of Action (JCPOA) shortly after taking office in 2018 under pressure from his principal donor Las Vegas casino magnate Sheldon Adelson, who is a persistent advocate for Israel. His wife Miriam has declared that there should be a new entry to the Hebrew Bible entitled the “Book of Trump.” Iran was in compliance with the agreement and it was beneficial for the United States as it would have denied Tehran the infrastructure needed to produce a nuclear weapon, but Adelson was in favor of attacking Iran, going so far as to recommend that nuclear weapons be used against it.

Trump also subsequently left the Intermediate-Range Nuclear Forces Treaty in 2019, using the same unsubstantiated argument being put forward by Administration hawks currently that Russia was not fully compliant with its terms.

This latest withdrawal suggests that there will be another departure if Trump is reelected. The New START Treaty, the only remaining nuclear-arms-control agreement between the United States and Russia, is set to expire in February 2021. New START was negotiated by the Obama administration, which would render it a prime target for rejection by Trump. It sets a cap on the number of nuclear missile warheads deployed by the United States and Russia, which is certainly to everyone’s benefit, but apparently the White House does not agree.

The trend is clear. Trump and his advisers, most notably Pompeo, are opposed to any international bodies on principle, most particularly if they are not completely supportive of U.S. policies and positions or are able to limit the White House’s freedom of action, up to an including the use of nuclear weapons. Recently Trump has cut off all funding to the World Health Organization (WHO) in spite of the globally significant coronavirus crisis. Last year, Trump cut off funding to the United Nations Relief and Works Agency (UNRWA) refugee program to punish the Palestinians and express his support for the Israelis. Now, the president is clearly opposed to any attempts at arms control and is seeking to dismantle the existing international framework.

“Trump hasn’t started any new wars” say the more cogent of his supporters. That may be true, but he has attacked Syria twice based on phony intelligence and has committed a war crime by assassinating a senior Iranian government official. And he sure has worked hard to elevate constant insults and threats into a major component of U.S. foreign policy while also taking away the international instruments set up to minimize the risks of war. And it will only get worse over the next five months as the White House works desperately to shift the focus away from the fallout from the mishandled coronavirus and towards foreign enemies who will be blamed for everything going wrong in America.