HOME / WORLD / From Open Skies to Open Season for Nukes 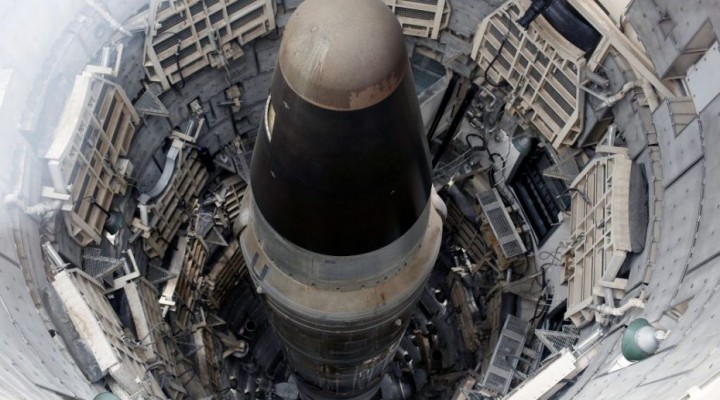 Washington is destroying trust and integrity by deliberately creating insecurity in order to achieve its geopolitical objective of controlling China.

Another one bites the dust. In less two years, President Donald Trump has now binned three major arms-control treaties – quite a record for undermining decades of international security architecture. First there was the nuclear accord with Iran (2018), then the Intermediate-range Nuclear Forces treaty (2019), and now the Open Skies Treaty.

There is growing concern that the Trump administration will let the last-remaining arms-control treaty fall – the New START (2010) which limits strategic nuclear missiles held by the U.S. and Russia. If it goes, then the world is facing an arms race not seen since the Cold War. It will be open season for nukes.

Into the malign mix are the current heightened tensions between the U.S., NATO, Russia and China. Confrontation could spin out of control with catastrophic consequences for the planet. There is a grim sense that risk of nuclear conflagration is greater than at any time since the 1962 Cuban missile crisis more than half a century ago.

There is strong suspicion that the Trump administration is deliberately playing the mad man as a negotiating tactic. It’s an unconscionable and extremely dangerous gamble with world security, but this would seem to be Trump’s diabolical art of the deal.

What the U.S. president wants is to tie China into arms-control treaties along with Russia. China’s nuclear arsenal is a mere fraction of either the U.S.’s or Russia’s – reckoned at one-twentieth of their combined stockpile. Beijing has stated over and over that it will not enter into arms limitations with the U.S. or Russia until the two nuclear superpowers first make drastic reductions in their number of warheads. That seems reasonable. The onus is on Washington and Moscow to first demonstrate progress on disarmament, as they are obliged to do under the 1970-founded Non-Proliferation Treaty.

Trump has repeatedly indicated possible extension of the New START with Russia, but only if China is brought into a trilateral deal. He therefore seems to be using the threat of an arms race as a way to lever Russia and China into a trilateral accord. But New START is a bilateral treaty between Washington and Moscow. By pushing the trilateral idea to include China, Trump is trying to rewrite the deal with Russia out of Washington’s desire to control Beijing.

Trump is affecting to show that he is prepared to throw away America’s signature – and jeopardize global security – in order to force China to the negotiating table on Washington’s terms.

When the Trump administration walked away from the Intermediate-range Nuclear Forces (INF) treaty last year, it accused Russia of breaching that accord. Moscow denied those claims as unfounded. It later emerged that the real reason for Washington rescinding the 1987 treaty was its desire to deploy short and medium-range missiles against China in its rivalry over Asia-Pacific.

In ditching the INF, the Trump administration is destabilizing European security and putting pressure on Moscow over potential threats from the return of U.S. short and medium-range missiles to European territory.

The ratcheting up of insecurity and the specter of an arms race is Trump’s calculated tactic for bringing China into arms limitations along with Russia. The scrapping of the INF and the threatened abandonment of the New START are all part of the same negotiating ploy. This is not just serial loosening of arms controls for its own sake, but rather as a way to lever both Russia and China. Perhaps, the Trump administration is calculating that it can unnerve Moscow so that the latter will in turn put pressure on Beijing to accept Trump’s “grand bargain”.

The announcement on quitting the Open Skies Treaty (OST) appears to fit into this game plan. The treaty was signed in 1992 and became effective in 2002 with some 35 member nations as signatories, most of them European states. The treaty allows for reconnaissance flights over territories to build trust.

Like the INF treaty, the Trump administration is using alleged violations of the OST by Russia as a pretext to jettison another arms-control accord. Again, the real objective is to create insecurity and latent threats in order to apply pressure on Moscow for concessions. The ultimate prize for the Trump administration and Washington state planners is to maneuver China into trilateral arms control.

When Trump announced the U.S. withdrawal of the Open Skies Treaty, it was done with noticeable ambiguity.

“Russia didn’t adhere to the treaty. So until they adhere, we will pull out, but there’s a very good chance we’ll make a new agreement or do something to put that agreement back together,” said Trump said at a press briefing last week.

His Secretary of State Mike Pompeo also dropped hints at deal-making with Russia while declaring an end to U.S. participation in the OST.

It seems more than coincidence that in the same week, Trump’s envoy on arms control, Marshall Billingslea, made a pointed offer to Moscow of extending the New START – but only if China were brought into a trilateral nuclear limitation treaty.

It might be asked: what is wrong with seeking a trilateral accord on nuclear weapons involving the U.S., Russia and China? Surely, a grand bargain like that might be deemed as making progress towards general nuclear disarmament.

But such rationale is putting the horse before the cart. The U.S. and Russia must first significantly reduce their arsenals as they are obligated to do. Moreover, arms controls and disarmament is all about trust and integrity. Washington is destroying trust and integrity by deliberately creating insecurity in order to achieve its geopolitical objective of controlling China. How can Trump build trust and do a genuine deal when he is doing all he can to kill any trust in a genuine commitment to obtaining international security and peace?

0 thoughts on “From Open Skies to Open Season for Nukes”