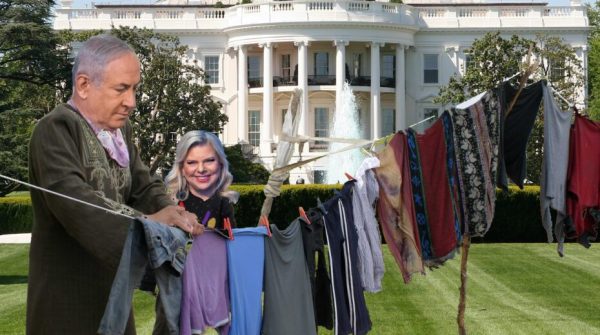 If you can steal a whole country, what’s a little laundry?

Staff in Washington D.C.’s Blair House, where the U.S. president houses his V.I.P. foreign guests, report that they have begun counting towels and robes after visitors depart. Soap and shampoo resupply is also being closely monitored and a metal detector has been installed in the downstairs breakfast room to prevent silverware losses. The heightened security comes in the wake of revelations regarding the all-too-frequent visits by Israeli Prime Minister Benjamin Netanyahu, who has been accused of regularly arriving at Blair House with multiple suitcases and bags containing many months’ worth of his dirty laundry, all of which he has washed, dry cleaned and pressed at U.S. taxpayer expense. While most visitors choose to deal with their soiled linen as a private matter, Bibi evidently is quite happy to have his washed for him in Washington.

Apart from the Netanyahu behavior demonstrating his complete contempt for his hosts, the prime minister appears to have an established track record when it comes to questionable behavior. He and his wife Sara have been the targets of several long-running corruption investigations in Israel, some of which remain unresolved. It is the latest in a series of crimes involving Israeli leaders, which have included the rape conviction of former President Moshe Katsav.

But more to the point, it is difficult to avoid the belief that the Jewish state and its hundreds of front organizations operating in the United States are basically both corrupting and impoverishing the United States one bite at a time. My father used to have a typical New Jersey expression describing someone who is obnoxiously persistent in trying to taking advantage of you. He called such behavior “getting pecked to death by a duck.” Lacking a sharp beak, one hardly notices the duck’s endeavors until it kills you. Israel and its proxies are the duck that is bleeding the United States one peck at a time.

There are, of course, the big-ticket items that make the news briefly like the more than $4 billion in annual military assistance that Israel gets, mostly guaranteed for the next ten years. Israel is now seeking $8 billion more on top of that to thank it for making friends with the United Arab Emirates and Bahrain in a politically motivated White House ceremony. Israel enjoys a number of tax breaks, co-production arrangements and trade concessions that almost certainly amount to more than $10 billion annually in a one-way cash flow to America’s “best friend and greatest ally.” The 1985 United States free trade agreement with Israel alone has benefitted the Jewish state by $144 billion, which is the U.S. deficit on the trade between 1985 and 2015.

One might note in passing that Israel is quite capable of defending itself, to include a nuclear arsenal and the means to deliver it, while its Jewish citizens enjoy a European standard of living, to include free public education through college and state provided medical care that is in part funded by American taxpayers.

But it is on the duck pecking level that the penetration and corruption of the United States becomes clearer. It seems that every week one notes a couple of articles here and there that reveal how Israel and its friends wield tremendous power at all government levels and also in the media. One that resonated in the past couple of weeks described how Ron DeSantis, Florida’s governor, has signed a bill authorizing the state’s department of motor vehicles to issue car license plates bearing the legend “Florida Stands With Israel.” The Israeli-American Council (IAC) immediately praised the “heartwarming expression of solidarity” which “affirms the strong bond between the State of Florida’s citizens and the Jewish State of Israel. This kind of warmth is why Florida has always been a leading destination for Israeli-Americans.”

Now, DeSantis is no novice when it comes to the sucking up to Israel game. He has been playing the Israel and anti-Semitism cards throughout his political career. In 2018, as a Congressman running for governor, he attacked his opponent Tallahassee Mayor Andrew Gillum during their gubernatorial race as not being a “friend of Israel.” Earlier, as a Congressman, DeSantis sponsored in 2013 the Palestinian Accountability Act which called for the withholding of U.S. aid to the Palestinian Authority until it recognizes Israel as a Jewish state. In 2017, he co-founded the Congressional Israel Victory Caucus.

When DeSantis ran for governor, he predictably promised to be the most pro-Israel governor in America and that the “first delegation [he] would lead would be to the state of Israel.” He then took his entire cabinet with him as part of a 75-person taxpayer funded delegation on a six-day boondoggle at the end of May 2019, meanwhile boasting that “Today I’m pleased to report that I’m keeping that promise. Our delegation will bring business, academic and political leaders to help strengthen the bond between Florida and Israel.” He held a meeting of his Cabinet in the American Embassy in Jerusalem during his visit, the first time that such a meeting has ever been held by a state government on foreign soil. During the meeting he ostentatiously signed a legislative bill “combating anti-Semitism.”

And now one can buy license plates extolling the parasitic relationship with Israel, surely a unique expression of dual loyalty not exhibited by any other state in the union. The Florida relationship is also a perfect example of how Israel’s friends go about setting up mechanisms that will benefit the Jewish state. Israel will be selling its products and services to Florida, enabled by a government in place that is promoting the process and will steer contracts in its direction. In return, Florida will get little or nothing as Israel is a tiny market and has no particular need of anything that the Sunshine State produces.

All such trade agreements are designed to enrich Israel. Another interesting example of how this works at the state level and the abuse that it can produce has recently surfaced in Virginia, where a so-called Virginia-Israel Advisory Board (VIAB) has actually been funded by the Commonwealth of Virginia taxpayers to promote and even subsidize Israeli business in the state, business that currently runs an estimated $500 million per annum in favor of Israel. Grant Smith of the Institute for Research: Middle Eastern Policy (IRMEP) has done considerable digging into the affairs of VIAB. He has observed how “VIAB is a pilot for how Israel can quietly obtain taxpayer funding and official status for networked entities that advance Israel from within key state governments.”

And then there is Congress, where a bill has been introduced that will enable Israel to block any U.S. arm sales to the Middle East that it does not approve of, a nearly complete surrender of American sovereignty to the Jewish state. And there is also the Congressman Brad Sherman of California story. Brad, who is Jewish, would very much like to replace recently defeated coreligionist congressman Eliot Engel as chairman of the House Foreign Affairs Committee. The committee, of course, deals with Israeli issues and Engel was widely regarded as one of the Jewish state’s staunchest friends in Congress. So what did Brad do? He approached a number of Jewish groups to help the process along. In a zoom event hosted by the Democratic Majority for Israel (DMFI) he confirmed that “You went to bat for Eliot Engel in a huge way, and demonstrated that you understood how important that chairmanship is… And I won’t compare myself to my good friend Eliot Engel, except to say that when it comes to having one’s heart in the right place, Eliot and I are in the exact same place.” If Brad succeeds, and he probably will, whose interests will he be serving in an important government office? Some might regard such behavior as treasonous.

Also out of California comes the story of some new legislation to combat the scourge of anti-Semitism, much in the media of late together with the shocking news that many Americans are unable to name even a single so-called Nazi death camp or to parrot alleged “facts” about the holocaust. What is described as “holocaust education” is already mandatory in a number of states where studying the American Revolution is apparently optional. Jewish groups have infiltrated boards of education to “advise” on suitable textbooks, which present a positive narrative relating to Israel while also depicting claimed Jewish victimhood. It is now also likely that holocaust education will become mandatory nationwide due to recent congressional passage of the Never Again Education Act.

At the end of August, California Assembly Bill 331 “took a major step toward [California] becoming the first state in the country to mandate completion of an ethnic studies course as a requirement for high school graduation.” Reports of “anxiety and outrage” in the Jewish community over the first draft of the bill had led the members of the 16 member California Legislative Jewish Caucus to quickly move to insert “guardrail” language into the text. The new language will “…prohibit the teaching of any curriculum that promotes bias, bigotry or discrimination, including against Jews or Israelis.”

The issue might seem relatively clear cut, but there was of course a hidden agenda, which was to block any consideration of the plight of the Palestinians or the Boycott, Divestment and Sanctions movement (BDS), which, it was feared, would become part of the curriculum. And the inclusion of “Israelis” as a protected group pretty effectively prohibits any discussion of Israel at all, except, presumably, in positive terms. In California schoolrooms one can criticize the behavior of the United States or Mexico but anything negative about Israel will be forbidden. And California is not alone. Twenty-nine states currently either ban or otherwise punish the promotion of BDS, largely due to the effective lobbying by Israeli partisans at the legislative level in those states.

So everywhere anyone turns, there is Israel, Israel, Israel. So, what’s a little dirty laundry between the “best friends” in the whole wide world? Maybe. But alternatively, it just might be that we Americans are getting pecked to death and all the Trumps and Bidens do is grin and smile while our country is being systematically screwed by a foreign country aided by a domestic lobby that is only in the game to take whatever it can. Wake-up America!