HOME / WORLD / The Endless War: Afghanistan Goes On and On 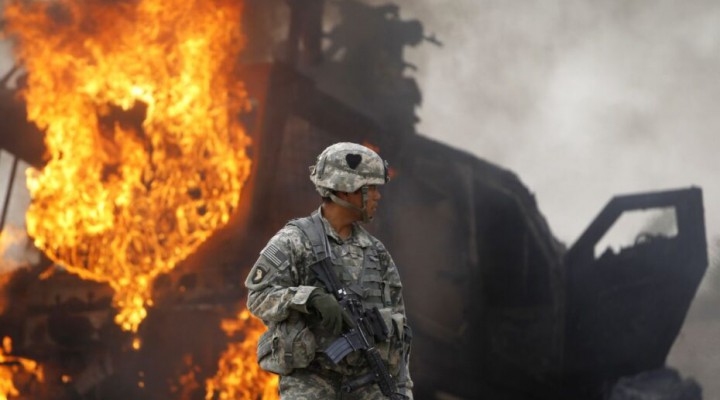 All indications are that the Pentagon will be able to maneuver more effectively in Washington than on the battlefield.

Given the present atmosphere in Washington in which there is no lie so outrageous as to keep it out of the mainstream media, a great deal of policy making takes place without even key players in the government knowing what is going on behind their backs. Of course, there is a long tradition of government lying in general but most politicians and officials have probably convinced themselves that they are avoiding the truth because complicating issues might lead to endless debate where nothing ever gets done. There may be some truth to that, but it is a self-serving notion at best.

The real damage comes when governments lie in order to start or continue a war. The Administration of George W. Bush did just that when it lied about Iraq’s secular leader Saddam Hussein seeking nuclear weapons, supporting terrorists and developing delivery systems that would enable Iraq to attack the U.S. with the nukes. National Security Advisor Condoleezza Rice knew she was not telling the truth when she warned that “the problem here is that there will always be some uncertainty about how quickly he can acquire nuclear weapons. But we don’t want the smoking gun to be a mushroom cloud.” She also was a key player in the Bush team approval of the CIA’s use of torture on captured al-Qaeda.

Rice is, by the way, not in jail and is currently a highly esteemed elder statesman serving as Director of the Hoover Institution at Stanford University. Likewise for her friend and patron Madeleine Albright who famously declared that the deaths of 500,000 Iraqi children due to U.S. imposed sanctions were worth it. In the United States the only ones who are ever punished are those who expose the crimes being committed by the government, to include a number of whistleblowers and journalists like Julian Assange.

The active American military role in lying probably started at Valley Forge but it came into prominence with the Gulf of Tonkin Incident, which was an alleged attack by the North Vietnamese on U.S. Navy ships that led to an escalation in Washington’s direct role in what was to become the Vietnam War, which produced 58,000 American dead as well as an estimated three million Vietnamese. No one was punished for faking the casus belli and today Vietnam is a communist state in spite of the martial valor of the U.S. Army.  Overall commander of US forces in Vietnam General William Westmoreland, who died in 2005, repeatedly advised the media and the White House that the American military was “winning” and there would be victory in six more months. General Westmoreland knew he was lying, as the Pentagon Papers subsequently revealed, and he also proved reluctant to share his plans with the White House. He even developed a contingency plan to use nuclear weapons in Vietnam without informing the president and Secretary of Defense.

Prize winning investigative reporter Gareth Porter has written an article “Trump Administration Insider Reveals How US Military Sabotaged Peace Agreement to Prolong Afghan War” that describes how the brass in the Pentagon currently are able to manipulate the bureaucracy in such a way as to circumvent policy coming out of the country’s civilian leadership. The article is based in part on an interview with retired Colonel Douglas Macgregor, a decorated combat arms officer who served as an acting senior adviser to the Secretary of Defense during the last months of Donald Trump’s time in office.  He would have likely been confirmed in his position if Trump had won reelection.

Porter describes the negotiations between the Taliban and Trump’s Special Envoy Zalmay Khalilzad, which began in late 2018 and culminated in a peace agreement that was more-or-less agreed to by both sides in February 2019. The Pentagon, fearing that the war would be ending, quickly moved to sabotage a series of confidence building measures that included disengagement and cease fires. In short, US commanders supported by the Pentagon leadership under Secretary of Defense Mike Esper as well as Secretary of State Mike Pompeo continued to attack Taliban positions in spite of the agreements worked out by the diplomats, blaming all incidents on the Taliban. They also used their “perception management” media contacts to float fabricated stories about Taliban activity, which included the false account of Russians paying Taliban fighters bounties for every American they could kill.

After the 2020 election, which Donald Trump appeared to have lost, Esper, Central Command chief General Kenneth McKenzie and the senior field commander General Scott Miller took the offensive against any withdrawal by sending a memo to the president warning that no troops should be removed from the country until “certain conditions” had been met. An enraged Trump, who believed that the disengagement from Afghanistan was the right thing to do, then used his authority to order a withdrawal of all US troops by the end of the year. He also fired Esper, replacing him with Christopher Miller as SecDef and brought in Macgregor, who had openly expressed his belief that the war in Afghanistan should be ended immediately as well as the wars in the Middle East.

Macgregor and Miller reasoned that the only way to remove the remaining troops from Afghanistan by year’s end would be to do so by presidential order. Macgregor prepared the document and President Trump signed it immediately. On the next day November 12th, however, Colonel Macgregor learned that Trump had subsequently met with Chairman of the Joint Chiefs Mark Milley, national security adviser Robert O’Brien and Acting Secretary Miller. Trump and Miller were told by Milley and O’Brien that the orders he placed in the memorandum could not be executed because a withdrawal would lead to a surge in violence and would damage chances for an eventual peace settlement. Trump was also told that an ongoing US presence in Afghanistan had “bipartisan support,” possibly a warning that he might be overruled by Congress if he sought to proceed. Trump later agreed to withdraw only half of the total, 2,500 troops, a number that has continued to remain in place under President Joe Biden. A current agreement has the US withdrawing those last soldiers, together with allied NATO troops, by May 1st but it is under attack from Congress, think tanks, the mainstream media and the military leadership for the same reasons that have been cited for staying in Afghanistan over the past twenty years and predictably Biden has folded. Last week he announced that some American soldiers will remain in country to maintain stability after the deadline.

The story of Trump and Afghanistan is similar to what took place with Syria, where plans to withdraw were regularly reversed due to adroit maneuvering by the Pentagon and its allies. It remains to be seen what Joe Biden will do ultimately as he is being confronted by the same forces that compelled Trump to beat a retreat. The more serious issue is, of course, that the United States of America portrays itself as a nation that engages only in “just wars” and which has a military that is under control and responsive to an elected and accountable civilian government. As Afghanistan and Syria demonstrate, those conceits have been unsustainable since the US went on a global dominance spree when it launched its War on Terror in 2001. All indications are that the Pentagon will be able to maneuver more effectively in Washington than on the battlefield. It will continue to have its pointless wars, and its bloated “defense” budgets.

Ep. 5475 – Gareth Porter on the Military’s Efforts to Subvert the Afghan Peace Deal

0 thoughts on “The Endless War: Afghanistan Goes On and On”