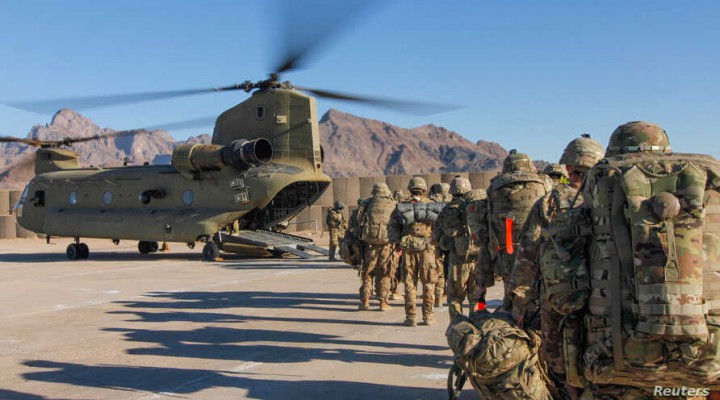 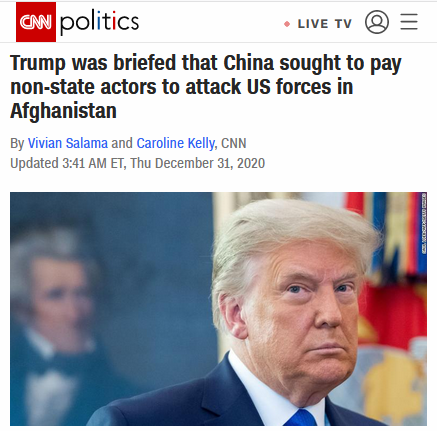 CNN (12/31/20) reports that “news of China offering cash for attacks on US forces comes as China awaits whether Biden will embrace Trump’s more punitive policies towards the nation or move to reset relations between Washington and Beijing.”

Outlets worldwide ran with the news, many treating it as highly credible:

There were, however, some serious flaws with the story. Firstly, all three original reports relied heavily upon hearsay from anonymous spies—or “senior administration officials,” as CNN and Axios called them. This is problematic, as it is precisely the job of state intelligence agencies to deceive and mislead. In 2019, former CIA Director Mike Pompeo (and Trump’s secretary of State) boasted of his organization: “We lied. We cheated. We stole. We had entire training courses [on] it.” These officials are among the least credible sources, journalistically speaking, that a reporter is ever likely to encounter. That none of them were willing to attach their names to the claims should make reporters doubly skeptical. (Some outlets did hint at the sketchy nature of the allegations in their headlines; Axios called the intelligence “Unconfirmed,” Business Insider—12/31/20—said it was “Unverified,” while the New York Times and Fox News—1/1/21—went with “Uncorroborated.”)

Naming sources is strongly encouraged journalistic practice, except in very rare circumstances where a source’s life or liberty may be at stake. The Society of Professional Journalists’ code of ethics instructs that “reporters should use every possible avenue to confirm and attribute information before relying on unnamed sources,” and that they should “always question sources’ motives before promising anonymity,” as too many “provide information only when it benefits them.” The New York Times agrees; its own guidelines on integrity strongly discourages the practice; “There is nothing more toxic to responsible journalism than an anonymous source,” wrote the paper’s public editor (5/30/04).

And yet, it continues to fail to practice what it preaches, particularly in foreign affairs and conflict reporting. A 2011 FAIR study (11/1/11) of the front pages of the New York Times and Washington Post found that nearly one-quarter of the stories (and virtually all of them focusing on Afghanistan or Al Qaeda) included information from anonymous state officials.

Through the years, FAIR has been highly critical of the deference media show to unnamed state officials (FAIR.org, 6/25/14, 3/29/16, 4/26/17), a practice that regularly leads to them printing false information (FAIR.org, 6/30/17, 12/3/18). The Times article  (12/30/20) on the Chinese bounty claim concedes that “United States intelligence agencies collect enormous amounts of information, much of which turns out to be false or misleading”—an admission that begs the question why this news was deemed fit to print in the first place. 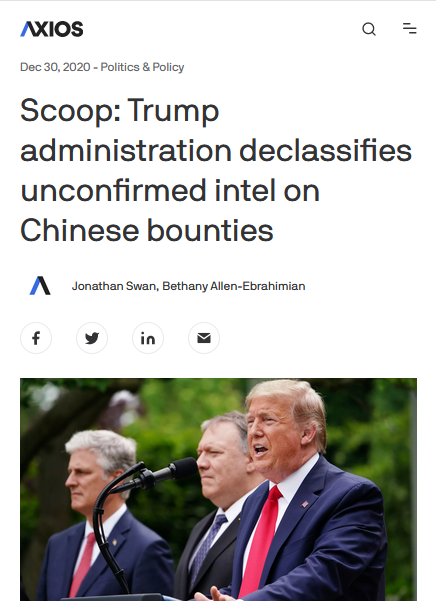 Axios (12/30/20) noted that “officials would not describe the source or sources of the intelligence or say when or over what period of time the activity occurred”—but a scoop is a scoop.

Axios, too, hedged its bets, informing readers that, “Officials would not describe the source or sources of the intelligence or say when or over what period of time the activity occurred,” admitting that they were “not able to visually inspect any reports detailing the intelligence,” and that all they had been provided was a verbal description from an official on the phone—an official who refused to give his name. Of the “five W’s” of journalism, this is what Axios presented us with:

The timing of the bombshell was also questionable, coming amid increased American aggressiveness towards Beijing. Throughout 2020, the US has been sending warships to within a few dozen miles of major cities like Shanghai. Last month, it also flew nuclear bombers over Chinese ships close to China’s Hainan Island.

Are Russia, Iran and China, the three countries that Washington appears determined to push to the edge of war, really providing us with such useful casus belli? The Times in particular seemed to almost be salivating at the idea of conflict with a nuclear power:

If confirmed, and particularly if traced to political leaders in Beijing, such an action by China would constitute a grave provocation that might demand a response by President-elect Joseph R. Biden Jr. after he takes office in January.

But perhaps the most fantastic thing about this story is that intelligence officials have pulled this same stunt twice in the last six months, first crying wolf over Russia, then Iran, accusing them of doing exactly the same thing: paying off the Taliban to kill Americans. Both previous times, they made a big splash in the media, causing outrage (FAIR.org, 7/3/20), and a reversal of a decision to pull more US troops out of Afghanistan. In the case of Russia, media immediately began walking the story back (NBC News, 7/9/20), something which has also already started with Chinagate, too (Politico, 12/30/20).

“It is unclear whether the intelligence on China shows that any bounties were paid, or whether any attacks on American personnel were even attempted,” the New York Times acknowledged, another reason why the story should have been discarded from the get-go, rather than repeated across the media. Furthermore, if China is indeed paying Afghans to kill American servicemen, they are clearly not getting much for their money; US armed forces recorded only 11 fatalities throughout 2020, down from hundreds during the Obama-era surge, and the lowest yearly figure since the invasion.

If corporate media want a genuine Afghanistan scandal, they could have piggybacked on the Intercept’s excellent and substantiated recent report (12/18/20) on how the CIA has been funding, arming and training death squads inside the country, driving them to schools they had selected so they could massacre children as young as eight. Instead of covering this, however (a search for “Intercept+Afghanistan” elicits no relevant results in the New York Times, Washington Post, CBS News, Fox News, MSNBC, NBC News or ABC News), corporate media have chosen to go back to exactly the same shadowy figures who fed them dubious information on official enemies before, and who are themselves overseeing demonstrable crimes.

Featured image: Voice of America depiction of US troops in Afghanistan.