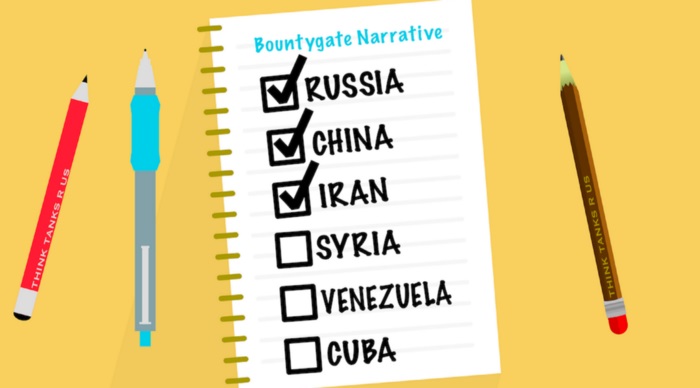 We’re now getting mass media reports that yet another country the US government doesn’t like has been trying to kill American troops in Afghanistan, with the accusation this time being leveled at China. This brings the total number of governments against which this exact accusation has been made to three: China, Iran, and Russia.

“The U.S. has evidence that the PRC [People’s Republic of China] attempted to finance attacks on American servicemen by Afghan non-state actors by offering financial incentives or ‘bounties’,” reads a new “scoop” from Axios, quoting anonymous officials who refused to name their sources.

The Axios report is already being circulated into public consciousness by mass media outlets like CNN. It is co-authored by Bethany Allen-Ebrahimian, whose career lately has been focused on churning out extremely aggressive narrative management about China for a liberal audience, including a ridiculous hit piece on The Grayzone and its coverage of Xinjiang which failed to list a single piece of false or inaccurate reporting by that outlet. This eagerness to help manipulate public perception of America’s number one geopolitical rival has seen Allen-Ebrahimian rewarded with plenty of attention from “sources” who provide her with endless career-amplifying “scoops”.

A few months ago, it was Iran we were being told is trying to use proxies to kill US troops in Afghanistan.

“US intelligence agencies assessed that Iran offered bounties to Taliban fighters for targeting American and coalition troops in Afghanistan, identifying payments linked to at least six attacks carried out by the militant group just last year alone, including a suicide bombing at a US air base in December,” CNN reported in August without any evidence.

Before that it was Russia this same accusation was being leveled at, with mainstream news media shamelessly regurgitating claims by anonymous intelligence operatives and then citing each other to falsely claim they’d “confirmed” one another’s reporting back in June. The story was sent so insanely viral by mass media narrative managers eager to pressure Trump on Russia during an election year that when the top US military commander in Afghanistan said in September that no solid evidence had turned up for this claim it was completely ignored, and to this day the liberal commentariat still babble about “Russian bounties” as though they’re an actual thing that happened.

Is this before or after he let Russia continue to place bounties on our troops and call our fallen heroes and those who serve “suckers” and “losers”? He stands for dictatorship and faux patriotism. He wouldn’t know service if it bit him on the bone spur. pic.twitter.com/7x0HSyc8c0

The “Bountygate” narrative was one of the most brazen psyops we’ve seen rammed straight from the US intelligence community into public consciousness with no lube in recent years, and it was so successful that they’re just spraying it all over the place to see if they can replicate its effects on other targeted governments.

It is not a coincidence that the information landscape is so confusing and bizarre right now. Our psyches are being hammered with more and more aggression by mass-scale psyops designed to manufacture support for increasing aggressions against the governments which have resisted absorption into the US-centralized empire, because as China rises and the US declines we’re moving toward a multipolar world.

A movement toward a multipolar world should not be a frightening prospect–it’s been the norm throughout the entirety of human civilization minus the last three decades–but after the fall of the Soviet Union the drivers of the US power alliance decided that US global hegemony must be preserved at all cost. Drastic measures will be undertaken to try and retain hegemony, and propaganda campaigns is being rolled out with increasing urgency to grease the wheels for those measures.

Meanwhile we’ve got nuclear-armed nations brandishing armageddon weapons at each other with increasing urgency and unpredictability because a few imperialists decided the entire planet should be governed from Washington DC. This, to put it gently, is an unsustainable situation.