HOME / SOCIAL/CULTURAL / Silencing Julian Assange: Why Bother With a Trial When You Can Just Kill Him? 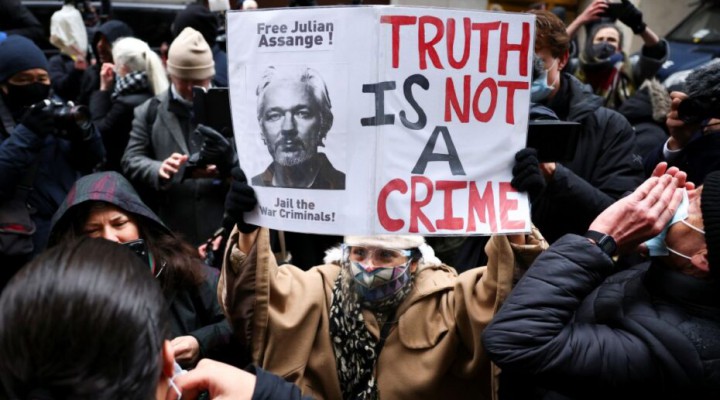 An English friend recently learned about the U.S. Central Intelligence Agency (CIA) plan to either kidnap or kill journalist Julian Assange and quipped “I’ll bet he’s happy to be safe and sound in Belmarsh Prison if he has a chance to read about that!” I replied that his time in Belmarsh has been made as demeaning as possible by an English judge and the British are just as capable of executing a Jeffrey Epstein suicide or “accident” if called upon to do so by their American “cousins.” He agreed, reluctantly. Indeed, the roles of American allies Britain and Australia in what is turning out to be one of the world’s longest-playing judicial dramas has been reprehensible.

For those readers who have missed some of the fun of the Assange saga, a recap is in order. Julian Assange, an Australian citizen who was living in London, was the Editor in Chief and driving force behind Wikileaks, which debuted in 2006 and was one of the alternative news sites that have sprung up over the past twenty years. WikiLeaks was somewhat unique in that it often did not write up its own stories but rather was passed documentary material by sources in government and elsewhere that it then reprinted without any editing.

Assange attracted the ire of the ruling class when he obtained in 2010 a classified video from an unidentified source that showed an unprovoked 2007 shooting incident involving U.S. Army helicopters in Baghdad in which a dozen completely innocent people were killed. The government’s anger at WikiLeaks intensified when, in 2013, Edward Snowden, a National Security Agency contractor, fled to Hong Kong with classified material that demonstrated that the U.S. government was illegally spying on Americans. WikiLeaks also reportedly helped to arrange Snowden’s subsequent escape to Russia from Hong Kong.

The bipartisan animus directed against WikiLeaks intensified still further in the summer of 2016 when the group’s website began to release emails from the Democratic Party and Hillary Clinton’s campaign. The immediate conclusion propagated by Team Hillary but unsupported by facts was that Russian intelligence had hacked the emails and given them to WikiLeaks.

It was perhaps inevitable that Assange’s reporting, which has never been found to be factually inaccurate, was in some circles claimed to be based on information provided to him by Russian hackers. Even though he repeatedly denied that that was the case and there are technical reasons why that was unlikely or even impossible, this led to a sharp Russophobic response from a number of intelligence and law enforcement services close to the United States. Assange was charged in Britain in November 2010 on an international warrant demanding that he be extradited to Sweden over claims that he had committed rape in that country, an accusation which later turned out to be false. He posted bail but lost a legal battle to annul the warrant and then skipped a preliminary hearing in London in June 2012 to accept asylum in the Ecuadorean Embassy, which has diplomatic immunity. He stayed in the Embassy for eighty-two months, at which point a new government in Quito made clear that his asylum would be revoked and he would be expelled from the building. He was preparing to leave voluntarily in April 2019 when police arrived and he was arrested on a charge of his failure to appear in court seven years before which was regarded as “bail jumping.” He was sent immediately to Belmarsh high security prison, where Britain’s terrorist prisoners are confined.

After his arrest, Assange continued to be incarcerated due to a U.S. Justice Department extradition request based on the Espionage Act of 1918, apparently derived from possible interaction with the Chelsea Manning whistleblower case. Assange has now been in Belmarsh for 29 months in spite of increasing international pressure asserting that he is a journalist and should be released. The British have hesitated to extradite him on the basis of the evidence produced by the U.S. government, which included the claim that Assange aided the former U.S. Army analyst Manning break into a classified computer network in order to obtain and eventually publish classified material, but they have likewise failed to release him. The British judge denied extradition in January, suggesting that if he were to be returned forcibly to the U.S. he would likely commit suicide, but she also denied Assange bail as he was considered to be a flight risk. The U.S. appealed that verdict and the next hearing is scheduled for the end of October. It should be noted that no evidence produced by the Justice Department has plausibly linked Assange to the Russian intelligence services.

Which brings us to the Yahoo news revelation regarding the CIA plot to shoot, poison or kidnap Assange while he was sheltering in the Ecuadorian Embassy. It goes something like this: in 2017, Assange’s fifth year in the Embassy, the CIA debated going after him to end the alleged threat posed to government secrets by him and his organization, which was still operating and presumed to be in contact with him. WikiLeaks had at that time been publishing extremely sensitive CIA hacking tools, referred to as “Vault 7,” which constituted “the largest data loss in CIA history.”

At the top level of the Agency debate over more extreme options prevailed, though there were legitimate concerns about the legality of what was being contemplated. In late 2017, in the midst of the debate over possible kidnapping and/or assassination, the Agency picked up alarming though unsubstantiated reports that Russian intelligence operatives were preparing plans to help Assange escape from the United Kingdom and fly him to Moscow.

CIA responded by preparing to foil Assange’s possible Russian-assisted departure to include potential gun battles with Moscow’s spies on the streets of London or crashing a car into any Russian diplomatic vehicle transporting Assange to seize him. One scenario even included either blocking the runway or shooting out the tires of any Russian plane believed to be carrying Assange before it could take off for Moscow. Pompeo himself reportedly favored what is referred to as a “rendition,” which would consist of breaking into the Ecuadorian Embassy, kidnapping Assange, and flying him clandestinely to the U.S. for trial. Others in the national security team favored killing Assange rather than going through the complexity of kidnapping and removing him. Fortunately, saner views prevailed, particularly when the British refused to cooperate in any way with activity they regarded as clearly illegal.

So Assange is still in prison and what does it all mean? The only possible charge that would convincingly demonstrate that Assange was spy paid by Russia would be related to his possibly helping Chelsea Manning to circumvent security to steal classified material, but there is no real evidence that Assange actually did that or that he is under Russian control. So that makes him a journalist. That he has embarrassed the United States, most often when it misbehaves, is what good journalists do. But beyond that the disgraceful CIA plans to kill or abduct Assange as an option to get rid of him reveal yet again the dark side of what the United States of America has become since 9/11.

More to the point, getting rid of Assange will accomplish nothing. He worked with a number of like-minded colleagues who have been more than able to pick up where he left off. He has been largely incommunicado since he has been languishing in Belmarsh Prison and it is his associates who have continued to solicit information and publish it on their site. Mike Pompeo’s unapologetic response to this assassination or kidnapping story was “They were engaged in active efforts to steal secrets themselves, and pay others to do the same …” Of course, if all that were true Mike and the government lawyers have had an opportunity to demonstrate just that in a British court. They couldn’t do so and instead promoted the easier option of just killing someone for publishing something true. And assassination is a blunt instrument that rarely accomplishes anything. One recalls that in January 2020 Pompeo certainly participated in the assassination of Iranian General Qasem Soleimani and Iraqi Militia Leader Muhandis in Baghdad. What did that accomplish apart from turning a nominally friendly Iraq hostile to the U.S. presence?

Or, as Assange’s lawyer put it more to the point, “As an American citizen, I find it absolutely outrageous that our government would be contemplating kidnapping or assassinating somebody without any judicial process simply because he had published truthful information.” Unfortunately, that is not all that the Assange case is about. It is not just a question of truth or fiction and journalistic ethics, but rather an issue of the abuses enabled by powerful men who believe that their power is unlimited. That is the real abyss that the United States has fallen into and the only way out is to finally hold such people, starting with Pompeo, accountable for what they have done.

0 thoughts on “Silencing Julian Assange: Why Bother With a Trial When You Can Just Kill Him?”