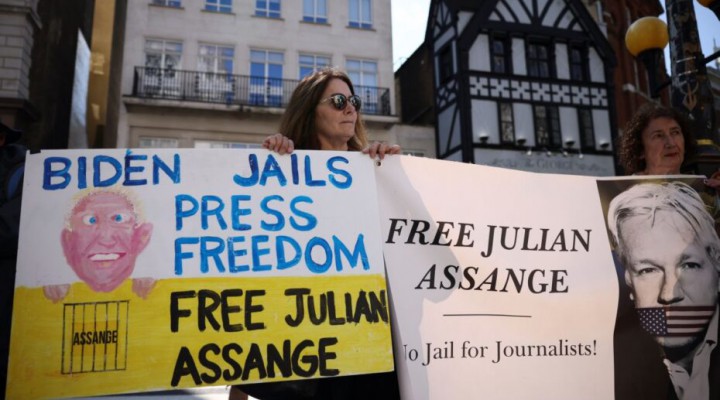 If Assange is not freed then the war on truth is going to explode. All independent journalism and basic human rights are under threat.

A report that the CIA was plotting to murder or kidnap Julian Assange is credible and it should not be in the least bit surprising that the agency sometimes known as Murder Inc would stoop to such criminality.

The CIA has for decades since its formation in 1947 involved itself in assassinating foreign political leaders and is implicated in the 1963 killing of its own President John F Kennedy in what amounted to be a coup d’état in the United States. The agency has operated as a rogue shadow government, an unelected permanent bureaucracy or deep state, that is above the law.

However, what is disturbing about the revelations from the Yahoo News investigation based on interviews with 30 former U.S. national security officials is that the “extreme measures” were being touted against an internationally renowned journalist and publisher. It was around 2017 during the Trump administration when Assange was being sheltered in the Ecuadorian embassy in London. He fled there after breaching bail in 2012 to escape fabricated extradition to Sweden on behalf of the United States.

President Donald Trump reportedly asked personally about the assassination option (a claim which he has since denied). The then CIA director Mike Pompeo and his deputy Gina Haspel were reportedly more unequivocal about using extreme methods. They both wanted vengeance against Assange over Wikileaks’ publishing of NSA whistleblower Edward Snowden’s disclosures about CIA global hacking techniques known as Vault 7. Those disclosures caused immense embarrassment for U.S. intelligence especially in light of hoary American allegations of Russian and Chinese cyberattacks.

Pompeo went on to become Secretary of State until Trump left the White House in January this year. Haspel was elevated to become CIA director by Trump in 2018, a position she still maintains under President Joe Biden. She gained notoriety for overseeing torture and rendition programs while a CIA station chief in Thailand during the GW Bush administration.

It is a shocking revelation that the extrajudicial murder of a renowned journalist supposedly protected by international laws of asylum and Vienna Conventions respecting consular inviolability could be so breezily discussed by senior CIA figures and top U.S. government officials.

The conceptual trickery giving a pseudo-legal cover to the heinous plot was the U.S. intelligence designation of Assange as a collaborator of a foreign enemy state – Russia. After the 2016 presidential elections, it was asserted that Russian military intelligence had hacked the Democratic National Convention (DNC) and supplied troves of emails to Wikileaks that were damning of Hillary Clinton’s corruption. The damage to Democratic candidate Clinton cost her the presidential election allowing Donald Trump to pull off a remarkable victory against the odds.

Julian Assange categorically stated that his source for the Clinton emails was not the Russian intel services. It is believed that the source was a disgruntled DNC insider who leaked the information to Wikileaks.

But the designation of Assange as a foreign enemy gave the CIA a legalistic license to use offensive counterintelligence techniques that do not require oversight by the president or congress. In short, the agency gave itself a license to kill Assange based on the spurious designation that he was colluding with a foreign adversary – Russia.

This got to the point where the CIA reportedly believed that Russia was going to exfiltrate Assange from London under diplomatic secrecy. The Americans drew up plans to have a shoot-out with Russian agents in London to thwart them, or even blow out the tires of a Russian jet trying to take off with Assange onboard.

The Kremlin has not responded to these reported claims. The hunch is that those racy details are a red-herring in an otherwise credible account of what the CIA was planning to do with Assange. The Russian intrigue facet is simply being used to lend credence to the false premise that Assange was working with the Russians and that the Kremlin hacked the DNC computers with the objective of influencing the 2016 election in favor of Trump over Clinton. Moscow has consistently denied that it interfered in the election or subsequent ones.

The purported scenario of a CIA shoot-out with Russian intelligence on the streets of London is a distraction from the heart of the story which is that the U.S. government and its rogue agency were ready and willing to murder an innocent civilian. Because the journalistic integrity of this civilian – Australian national Julian Assange – led him to publish damning revelations about Washington’s systematic war crimes and crimes of mass surveillance against its own citizens.

Acts of state terrorism by the CIA have always been carried out under cover or with plausible deniability. But in the case of Julian Assange Murder Inc was discussing “termination with extreme prejudice” (the euphemism for murder) as if it were ordering in coffee and donuts.

In the end, for whatever reason, the CIA did not go through with its assassination plot against Assange. But it got the next option: extraordinary rendition. The raiding of the Ecuadorian embassy in April 2019 by British police to snatch Assange was rendition under the guise of British justice. Assange has been in solitary confinement for two and a half years in a British maximum security prison reserved for psychopaths and dangerous terrorist offenders, awaiting an extradition appeal by the United States. In that event, Assange will die inside a U.S. prison. So, while Washington’s powers-that-be didn’t get to murder Assange outside prison, they have succeeded in rendering him to a black site.

That is where we are now at. Journalists telling the truth are openly targeted for murder or burial under concrete as a prisoner of the state.

The public case is clearer than ever after the latest revelations of the CIA plotting to murder or kidnap Assange. He must be freed from such blatant, premeditated persecution. If Assange is not freed then the war on truth is going to explode. All independent journalism and basic human rights are under threat.